ionisio D’Aguilar’s response to my disclosure of his Company SuperWash submitting false entries to the Customs Department was indeed laughable as D’Aguilar was not honest but misleading as he claimed that the Customs entry that I referred to in my release was submitted by an unscrupulous Broker, a broker whom he failed to identify. Additionally D’Aguilar did not disclose if had taken any legal action against this phantom Broker for sullying the name of his company.

The facts are that Customs Duty entry number 002267 submitted on December 27th 2013 was an in-house entry by someone in the employment of SuperWash Ltd and not by a Broker as D’Aguilar asserted. One can only logically conclude that the falsifying of invoices numbers: 8028636112, 8028636111, 8028662205 all dated 20th November 2013 were done in-house at Superwash and not by a Broker as claimed by Dionisio D’Aguilar. Also NO Broker’s name appears on the Custom’s Duty Entry form.

Dionisio D’Aguilar needs to give answers to the following questions:

Who gave the invoices to the person that submitted the customs entry?

Why did D’Aguilar not see it fit to verify the paperwork as he claims to be an astute businessman and a Certified Public Accountant (CPA)?

Its worthy of note that Dionisio D’Aguilar personally supervised two of the containers delivered to the SuperWash Blue Hill Road location and therefore he was fully aware of the receipt of the said shipment.

In my previous statement I Publicly called on D’Aguilar to come clean with the Bahamian people and state whether or not there were other false declarations submitted by his companies to the Bahamas Customs Department. D’Aguliar refused to come clean and I have identified that there is at least one another falsified invoice submitted on behalf of SuperWash.

D’Aguilar claimed that the invoice was submitted to him electronically to prepare and submit for entry. Assuming same is true, one therefore must conclude that D’Aguilar knew in advance the customs duties amounts prior to its submission.

There are a second set of falsified Super Wash which D’Aguilar deliberately refused to disclose.

The information on the first falsified invoice are as follows:

High Rollers Trucking submitted a falsified invoice to the Customs Department in its name but on behalf of SuperWash on the 20th April 2013 for 21 commercial washers (DEXTER), 33 commercial dryers and 53 coin boxes with a declared value of $159,165. Freight charges totaled $1,595 bringing the total to $160,760.

Again an astute customs officer was able to uncover the original invoice made out to Superwash dated 5th April 2013 with a total value of $258,903 plus freight of $1,595, bringing the total value of $260,498. The Customs Officer discovered that this shipment was undervalued by a whopping $140,872 which defrauded the Bahamas Government of some $63,392 dollars in revenue.

A letter signed by Dionisio D’Aguilar to Customs dated July 31st 2013 acknowledged the said invoice which originated from a US Laundry Equipment supply company called Laundry Pro was falsified.

High Rollers trucking was then directed by the Customs Department to pay the difference and penalties of some $14,000 and $5,000, totaling $19,000 in fines. However the fines were paid by SuperWash. The corresponding documentation is attach for your reference: CLICK HERE TO DOWNLOAD.

There is clearly a pattern of dishonest behavior on the part of Mr. D’Aguilar that would lead any logical thinking person to conclude that he is indeed a serial tax dodger which falls under the umbrella of white collar crime. This unethical behavior must be roundly condemned by all. I call on the Bahamas Customs Department and the Ministry of Finance to conduct a review of all of the invoices submitted by companies owned by Dionisio D’Aguilar. As the old saying goes once may be excused but twice is a habit.

I further call on the good people of Freetown to strongly reject Mr. D’Aguilar on Election Day, leaving him to do what he does best which is washing, drying and pressing clothes. 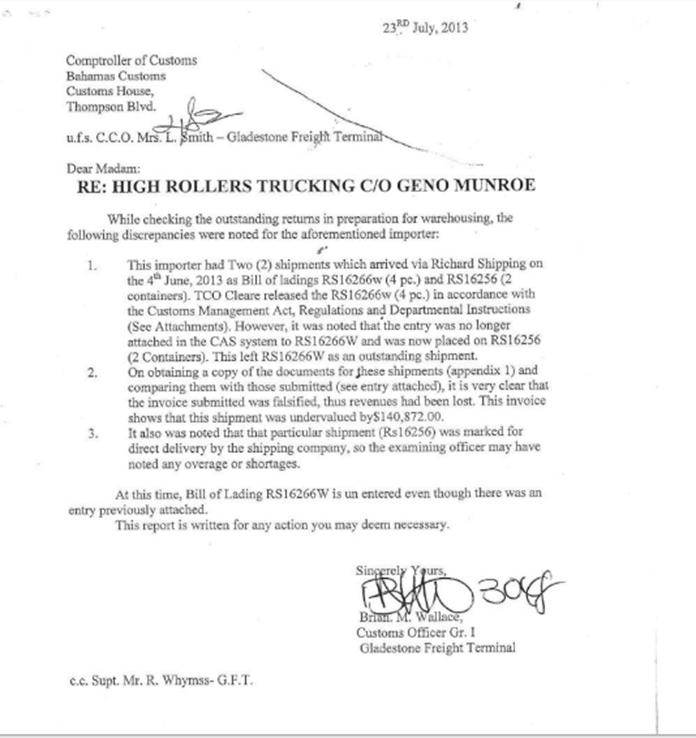