DNA could be taking the country back down the road when Bahamians were denied access to Bay Street – ONLY THE DEVIL COULD BE ADVISING THE DNA!!! 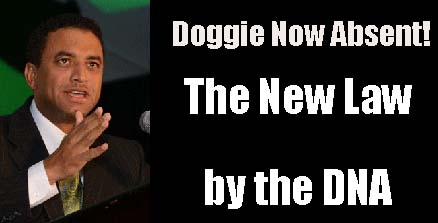 King Herod and King Henry VIII may have nothing on Branville and his DNA – The Party now believes in blocking Bahamians off Bay Street and chapping off dicks…. WHAT IN THE HELL IS DIS?

Nassau, Bahamas — DNA leader Brandville McCartney is clearly showing signs that he is fighting to stay politically relevant in today’s politics and, according to some political statements, could keep him out of politics for good.

Recently, the DNA leader in his New Year’s Day Address called for a curfew on Bahamians – such actions against blacks have not been seen since the days before January 10th, 1967. UNBELIEVABLE!

The Party in its statements echoed: “….We need, now, to implement a curfew!  And we, in the DNA, would suggest that the professionals of the Royal Bahamas Police Force (RBPF), the Royal Bahamas Defence Force (RBDF), etc., outline the terms and conditions of the curfew and implement same as soon as possible.”

Bahamians would remember this was the same approach of the UBP who kept Bahamians off Bay Street, hired West Indian Policemen to carry out the same and detained locals for even talking too loud sometimes. One must wonder if Bahamians wish this kind of archaic and brutal leadership once again.

But this was not all enunciated by the DNA crew.

In its national address to Bahamians, the party leadership also called for castrations to commence in the country to prove that sexual violence under Branville’s administration will not be tolerated or accepted.

The Party said: “Serious consideration should be given to castration of sexual offenders and rapists, as an absolute deterrent, owing to the astounding proliferation of rape and sexual assault cases, in particular against minors in the Bahamas!!!”

In short, one observer in the Party opposed to the idea stated that, “What the party is really saying is that once elected ‘doggies’ will drop under the guillotine. I am opposed to this and this is not in keeping with any international thinking on human rights. Why should we return the stone ages – and the dark days of King Herod who massacred innocent boys after feeling threats to his kingship? Or why should we return to the days of King Henry VIII – who placed his wives under the guillotine because they could not give him a boy child? What we in the DNA are proposing are archaic barbaric laws, which cannot be tolerated in by any sensible Lords of a high court. We should be proposing ways to better socialize our people, and introduce programs which can reform offenders; not cutting they ‘doggie’ off!”

What is even more fearful is the fact how the DNA may be in support of a proposed Marital Rape Laws once formally introduced in the Parliament under the FNM Regime. And, although the DNA leader McCartney back peddled when the law was first announced, the New Year’s address by the Party leaves many questions.

“Now that we know the Party would ‘cut off ya doggie’ once you commit a sexual crime, the question remains: what if maritual rape in introduced and men accused of raping their wives are hauled before the courts? It would then certainly be safe to say that the DNA government would without apology make one’s Doggie Now Absent – {DNA},” another political observer told BP…

All we at BP say is: WHAT IN THE HELL IS DIS?