Are Police Corrupt Marvin DAMES because of their low salaries? Is that what you are saying? 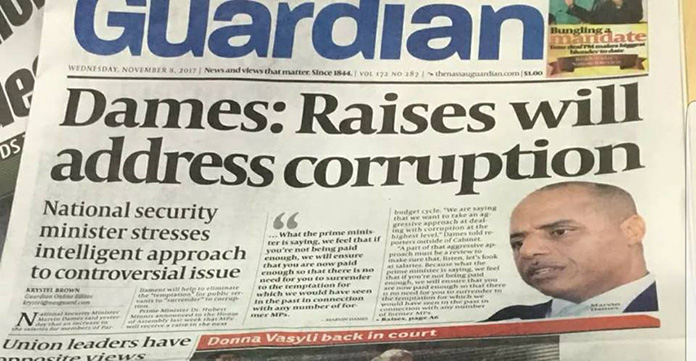 The Democratic National Alliance was both shocked and appalled to the hear members of the Minnis cabinet attempt to defend and justify plans for increased MP Salaries during perhaps one of the worst periods of economic decline in our country’s history. Most disturbing however, have been attempts to peddle the idea as a cure to the endemic culture of corruption which has plagued our governance for decades.

Among those pushing this dangerous train of thought was the Minister of National Security who claimed that the increase would somehow curb the corrupt tendencies of those in the public sector. Sadly, this idea is nothing more than a fallacy. Rather than attempting to appease the potentially corruptive nature of politicians we should instead work to strengthen the laws that govern us all and ensure that NO ONE is made exempt from those laws. The only way to fight corruption in the public sector is through a series of strong anti-corruption laws coupled with a fully enacted Freedom of Information Bill.

Not only do the Minister’s comments hold no water but they also seem to betray a lack of confidence in the character and integrity of the men and women serving within this administration. It was the late Bob Marley who said: “If something can corrupt you, you are corrupted already”. If the good Minister does not trust his colleagues in government, why should we?

Despite their feeble attempts at justifying this dangerous train of thought, THERE IS NONE!