PM Minnis should remember the 1989 conviction and imprisonment of former MP Wilbert Moss after he attempted to convince a judge on a case…. 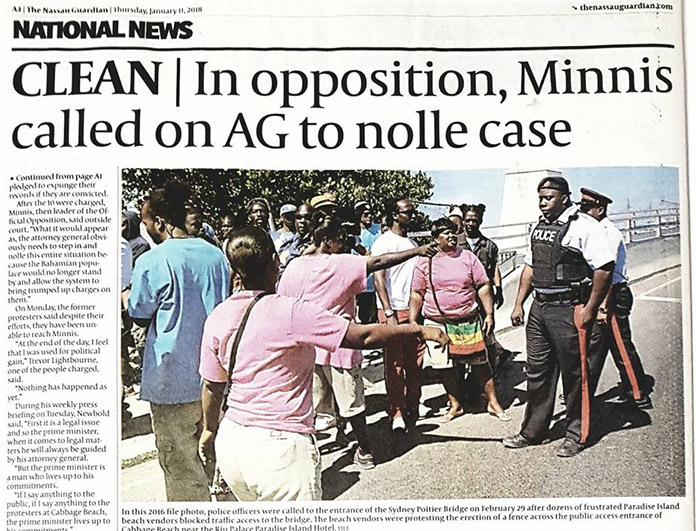 Nassau – The Cabbage Beach protest, which took place last year, has delivered a new level of incompetence the likes of which the country has never seen.

This week, here comes PM Minnis’ Press Secretary, Ace Newbold, who added to the dumbness by confirming that the PM intends to keep his promise to the ‘Cabbage Beach 10’ – that is, in the event that they are convicted, he will wipe their records clean.

The group wants the Prime Minister, through the Attorney General, to withdraw their case from the court. Now, these same people forget how Dr. Minnis promised to not allow the AG to exercise such CORRUPTION of the system.

The point is a Prime Minister has no power to dismiss a case. That is the discretion of the magistrate or prosecutor who finds weakness in a trial.

But what is indeed appalling is the fact the 10 persons who allegedly committed the act of destruction have decided to expose their betrayal in the court of public opinion, while convincingly making great noise of their distrust with the judiciary. Perhaps these developments should have sparked commentary from the acting Chief Justice who opened the new legal year on Thursday.

We believe the 10, who have called for interference by the PM, are bordering on the edge of contempt as their matters are being heard and they are showing no kind of respect for due process; they are in many ways committing prejudice in the case.

Ret. Justice Joan Sawyer, who we at BP almost never agree with, made her position clear on this matter yesterday as she told the media that Dr. Minnis was wrong to have made such a suggestion of expunging to the 10 persons, who he led over on Paradise Island where the crime was committed. And, although we believe her comments are indeed correct, we add they are more than a year late.

It is our view, though, that Dr. Minnis should take a page out of history when commenting on such matters and should remember the actions of former Member of Parliament for Acklins, Crooked Island & Long Cay, the late Mr. Wilbert Moss, who attempted to interfere in the course of justice in the courts back in 1989.

Moss left the House in disgrace after being convicted of attempting to bribe a Magistrate in 1989 on behalf of a constituent who was involved in a drug case. As fate would have it, the constituent was not found guilty in the trial, but Moss went to prison for his role to convince the judge.

We ga warn Dr. Minnis to remember this: NO ONE IN THE BAHAMAS IS ABOVE THE LAW! And no one but the judge can do what these supporters are attempting to beg you to do.

Additionally we want to add to this conversation one fact: Readers would remember that when these matters first began the Speaker of the Parliament Hon. Halson Moultrie was their attorney. Perhaps behind the scenes he still is. But notice something: the Speaker, who knows the law, is not suggesting any such idea. Those caught up in this attack are. Why yinner think he is quiet cause he has open door access to both the PM and the AG?