Sands team believes he is better suited for the people of Long Island – What in the hell is this? 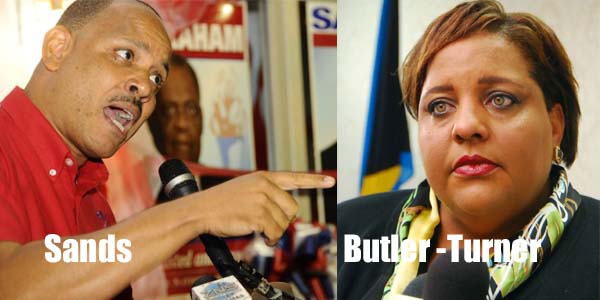 Loretta Could soon Drop a Piss Slap on Duane Sands!

Clarence Town, Long Island – All hell could break loose in the FNM if one aspiring politician has his way. The man, who BP gave the name the “heartless surgeon” after he threw a woman and her children into the streets during the coolest winter ever, is now eyeing Long Island, sources tell BP, and, if what is being sought comes to pass, members of the Free National Movement could enter into the bloodiest war yet.

You heard it first from Bahamas Press.  We told you a plan is afoot within the opposition party to remove the slapping MP for Long Island, heavyweight Loretta Butler-Turner, from the post of Deputy Leader of the Party.

BP was the first to break that we know Ingraham’s most seasoned policy writer, Theresa Butler, was being engaged by the Loretta camp to take on Party Leader Dr. Hubert Minnis at the next convention. And while Lori is being tricked, hoodwinked and bamboozled by some, the Ingraham tribe plans to slip Zhivargo Laing into the Deputy post to create succession within the Party.

While former Barbados Prime Minister Owen Arthur was in the Bahamas, BP overheard a conversation between Ingraham and the former Caribbean leader. At that meeting Ingraham boasted, “Laing is my successor and I am prepared to get him in…”

And while Ingraham chuckled and laughed following those comments, as if it was a joke, today the plan is afoot.

Once Loretta is removed, and Laing is slipped in, the group’s plan is then to have Loretta unseated from her safe Long Island seat.

What in the hell is this.

Sands, who also has ambitions for leadership, has already been making contacts down in Long Island and appears to secretly be courting the Long Islanders Association here in the capital.

Sands, you would remember, before the 2012 general elections was being considered for Long Island.  However, Ingraham made way for Richard Lightbourne and eventually sent Loretta into Long Island with the hope she would have been rejected and completely removed from the face of the Party.

Dr. Sands now wants the seat and, to do it, he has begun appearing on shows, talking up the neglect of the Family Islands.

Long Island residents are upset with their MP who recently shut down her party headquarters as the demands become great.

It is said that the demands are so great that, after a stressful day in the height of summer filled with requests by constituents, Loretta made a 360-degree heavyweight spin and slapped the piss out of MP for Fort Charlotte Dr. Andre Rollins.

Some tell us the slap was so hard MPs thought it was a thunderclap.

And although Sands wants nothing to do with third cut-hip from Lizzy MP Leo Ryan Pinder, the last thing he may want is a Code Blue pissin slap from Loretta.

That could send him into the political graveyard to join the ranks of the fallen.