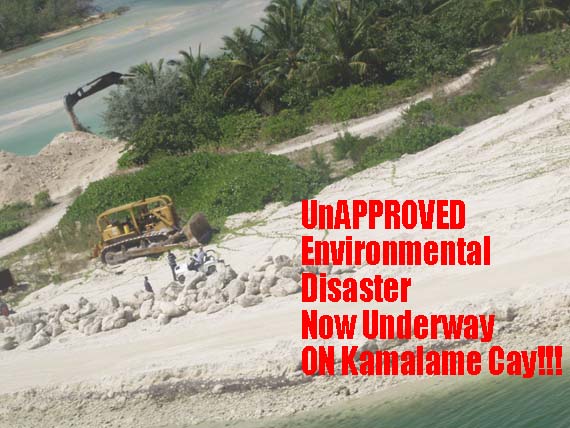 Andros, Bahamas — While the eyes of the public are focused on Bell Island in the Exuma Land and Sea Park, as the Aga Khan IV has already begun to excavate a hill in order to accommodate his dream of a two-slip marina, environmental concerns are also looming on the island of Andros.

Calls are now being made for the government to also be transparent about the affairs of Kamalme Cay, as Andros has long been considered an untouched beauty with massive potential for development in the future.

Hew was recently featured in the Aficionado magazine, boasting of “blending work, life, pleasure and everything in between” at Kamalame Cay.

The Cay features three miles of white sandy beaches and Hew’s 7,000-square-foot home, which sits opposite the cay on land that is connected to Andros by a sand road.

But an excavation project is presently underway at the Cay.  Heavy duty equipment can be seen digging into the sea bed, creating a deep trench.  The crew is apparently using the dredged sand and building up an area to create what appears to be a canal, completely changing the face of the original landscape.

It raises the question how another sacred piece of land could be defaced without public knowledge.

Aficionado reports that Hew, who also manages the Compass Point Hotel resort in Nassau for an outfit called Island Outpost, settled down on Kamalame Cay with his family in 1994.

The magazine reports that the Hews made a deal with the Bahamian government in the mid-1990s. The government wanted a number of islands developed as resorts to increase tourism. It would sell land cheaply, with the understanding that it must be developed before the buyer could take over the ownership of the island. So, the Hews had to put in infrastructure and buildings and get the island up to resort status before the transaction would be officially completed.  It says the Hews became the official island owners in 2001.

But the Constitution states that the land remains the possession of the Bahamian public up to the high water mark, all around the shores of any island within the Commonwealth of The Bahamas.

Therefore, the dredging of the seabed and the building up of any area which would create a man-made extension of the land requires proper permits and approval.

Once again media officials are calling for the Minister of the Environment Earl Deveaux and the Bahamas National Trust to explain how the approval was granted for major dredging of the sea bed on a strip about 150 feet long.

And it leaves Prime Minister Hubert Ingraham in a position of having to address the public quickly on these pressing issues.