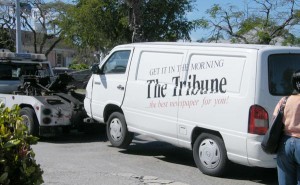 Nassau, Bahamas – It is quite interesting to see that the pages of Bahamas Press are combed and echoed these days in the lame stream media where they have developed the belief that Bahamas Press is PLP.

We at BP make no apologies for talking truth and placing our support behind that party. We brought the PLP to the dance. We “publicly” endorsed the new generation of leaders in the last election. And we are not ashamed of that fact.

Conversely, our opposition/FNM apologists and blind sympathizers [Tribune and the WUTLESS MEDIA DEM] cannot boast the same. ‘Yinner dem’ supported Hubert Ingraham – and he lost! As Mr. Ingraham would say, “WE ARE IN AND THEY ARE OUT”! It is as simple as that!

Some bellicose actions against this website have come mainly from the Tribune of late as they attempt to seek comfort in their new station in life. They are clearly dying by the day. They have fewer readers, fewer ads, less pages, low circulation, and even fewer followers these days, and have had to come to BP TO FIND LEAD STORIES.

What a sad state for a dinosaur to be in.

But we are not surprised at all. Who remembers how they once termed us “Scribblers”, responsible for writings which they [and we quote], “resign to the garbage bin and click delete.”

But today they are all over BP quoting our every word – and we know why. The giant is slain by a little David, the shepherd boy.

And so, like a boogieman, they have come out of nowhere with their marionette [FNM] in step, exercising frivolous arguments against the new government especially when it comes to crime.

One cannot remember whether the pages of the Tribune have yet acknowledged that, since 2007, the Free National Movement presided over the bloodiest crime spree in our country’s history? For them, apparently history began on May 7th, 2012. And prior to that May 2nd, 2002 – 2007. Bahamians aren’t fool!

They don’t have the nerve to even discuss the scandal in the Ministry of Tourism, where more than eight hundred and twenty five thousands dollars went to a shell company which started with $10 in its bank accounts; a deal orchestrated and coached by the former FNM Minister, Vincent Vanderpool Wallace.

They are mute to such revelations.

We wonder if they know that since 2007 we have not only had the bloodiest period in the country’s history, but also under the former government more than 530 persons lost their lives to murder, producing four years of record numbers of murders since the FNM presided as the Government of the Bahamas. They cannot find the nerve to say it, supposedly because they thought then it would scare away tourists – which was also resurrects something  those sympathizers on Shirley Street also failed to pen: The Bahamas since 2007 was consistently outpaced by its Caribbean counterparts when it came to tourist arrivals here in the country. Where the Bahamas up to 2012 was experiencing stop over arrivals to levels of the 1980s. What a disgrace!

Where were the Tribune’s columns when the United States of American State Department through its Embassy here in Nassau, sent a communication to every one of its citizens here in the country, warning them about the escalating crime trend and scary situation unfolding in the Bahamas under the FNM?

The Tribune said not a damn word about it. And we ga say it again: they were all over the place writing about jumpstart, false start, no start hop scotch, and every deflective argument they could find to distract their readers from the real and frightening situation that was unfolding.

Now that the town has turned quiet, with just 3 murders in almost four weeks, they on the roof top shouting about crime?!  Yinna gata think we fool eh?

The Tribune also asserts that they have a “hunch” that someone in the government must have interfered in the work of the force to suppress the information.

No one have ever in the history of this country meddled in the workings of the Police Force like Hubert Alexander Ingraham. And to jolt the ‘terlet’ paper’s memory, that is why persons branded him a dictator.

Some forget how he fired police officers and sent scores more who did not align with his political persuasion on early retirement  – a dangerous precedent to set.

Additionally, the Tribune never mentioned our findings in a series of communications issued between Tommy Turnquest and the then Commissioner of Police Mr. Greenslade, which revealed a serious breakdown in communication.

Officers voted against the failed Ingraham government because they believed some “Foreign” cop could do a better job in cleaning up our streets! And they look to that “Foreign Cop” for solutions over Greenslade and his team. But on May 7th, police officers believed in Bahamians and rejected the FNM!

Let’s also say something about this rape thing.

Does anyone remember that rape incident at that prestigious school in the east? Could you quote something in the Tribune on that? A former FNM Cabinet Minister’s son was involved in that incident and it was swept clean under the rug.

Or how about that rape of more than 20 boys at a school in Eight Mile Rock, which resulted in an international manhunt for Andre Birbal, the convicted child molester. Where were the Tribune and the wutless media ‘dem’ when the children were getting raped in public schools?

Molested in a programme funded by the Ministry of Education at the time? Where were they? Where were their arguments of support when Glenys Hanna-Martin [The GIANT SLAYER] was blocked out of Parliament and named by the Speaker for standing up for those molested children who we should have been protecting!

You would remember how then Acting Director Lionel Sands came on ZNS to repeat the words of WUTLESS reporters at ZNS. Sands told the public that the incidents were not true that, “THERE WAS NO CASE!” at the school. That was a DAMN LIE and the Tribune fanned it!

The PTA president Troy Gravey had reported the matter to the police and the Ministry of Education, but nothing was DONE!
The then minister refused to entertain the Garvey and his team.

WHERE WAS THE TERLET PAPER THEN WHEN THE CHILDREN WAS GETTING RAPE! MUTE!

OHhhhhh, but there was an angel in the earth when these incidents unfolded. A young beautiful reporter from Love 97 FM named, Vanessa Rolle, out of Grand Bahama, was the first to break the story, and BP was on it from day one.

Anyone remembers what the Tribune wrote when the police were silent? When the minister said nothing? When Lionel Sands went on record saying, “THERE WAS NO CASE OF SEXUAL MISCONDUCT AT THE SCHOOL”? When the crisis centre was mute? What did the Tribune write?

They defended the pedophile Andre Birbal and argued in their pages that the incident – even if it had occurred – would be statute barred. That’s where they stood on molestations/rape incidents at a public school. And now they want attack the COP Super cop Greenslade?

And since May 7th, they are all concerned about rape? We cry shame on them!

They should have nothing to say but give penance for their wicked deeds .

The Bahamian communities are much quieter than they were almost 7 weeks ago. Ask your neighbour if you don’t believe us!

The Government’s plan to fight crime is working! The Commissioner is working and, for the first time in his long career, he has full command of his force. UNHEARD OF UNDER THE FNM!

As Dr. Minnis told FNMs a few days ago we tell the terlet paper…Get over it!