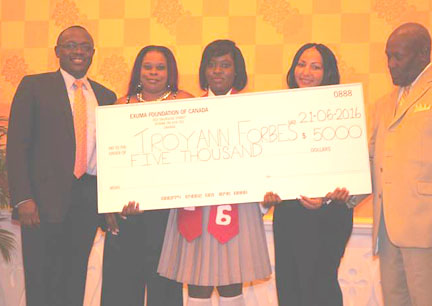 It was more than 185 years ago that Pompey, a slave living in Exuma, sparked a rebellion that stopped a transfer order that would have separated 77 men, women and children from their families.

On a sunny day in Emerald Bay, L N Coakley High School helped write the next page in Bahamian history when a young woman was awarded the first ever Pompey Scholarship for her commitment not only to her studies, but the community at large.

“It feels wonderful and it is very overwhelming. I did not expect it at all,” Forbes said, who will attend Acadia University in Canada this fall to study Biology. “I am just so grateful.”

The Pompey Scholarship is the aftermath of the inaugural Run for Pompey, held last October during National Heroes Day Weekend. It attracted more than 200 runners from four different countries, including Canada, the United States, the UK and The Bahamas. Featuring a 2K “George Town Dash”, 10K, half marathon, full marathon and the country’s first and only 50K “ultra-marathon” race, Run for Pompey takes to the streets of Exuma once more on October 9, 2016.

You can learn more about the race and register for the races here.

The event features commemorative Pompey medals for all participants, wood-carved trophies for the winners by age category and even a special “Pasta Night Party” the evening before the race at Grand Isle Resort, the official hotel partner.

Legendary “Golden Girl” Pauline Davis-Thompson will again serve as Run for Pompey’s patron and drape medals around every neck at the finish line, while offering remarks during the Pasta Night and at L N Coakley High School.

The latter, L N Coakley High School, and its bright young minds, are the inspiration behind the event for co-founders Kevin Taylor, the owner of DreamKatcher Media, and the team at GIV Bahamas Inc in Exuma.

“This is our first scholarship and we plan to do many more. We are proud to be an organization based on community and helping young people.”

GIV Bahamas Inc. is joined by a number of sponsors, including BAF Financial & Insurance (Bahamas) Limited, MRI Nassau and the Bahamas Ministry of Tourism.

“We believe Run for Pompey cements the legacy, history and culture of Exuma,” said Chester Cooper, the President of BAF Financial and title sponsor of the race. “Exuma is a magnificent place. Pompey has a magnificent story. The legacy and history, mixed with the event itself, on the marathon and tourism calendar of the Bahamas, make this a magnificent offering.”

Cooper, who was on hand to present The Pompey Scholarship, added that BAF’s support of Run for Pompey “is a win-win and no-brainer for BAF”.

The donation for The Pompey Scholarship will be made to Acadia University by the newly formed Exuma Foundation of Canada, which has provided a unique off-shoot of the existing Exuma Foundation.

He also commended GIV Bahamas Inc. and the Exuma Foundation of Canada for their efforts to bring about an annual, world-class event for the island.

“We want to improve the quality of life for all Exumians and we will continue to work together to accomplish this,” he explained. “She has been a very strong community leader in sports, academics, church, and really trying to improve the whole community. That is why she was chosen.”