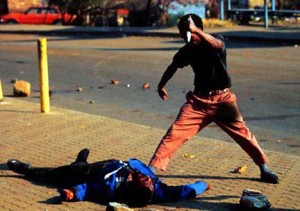 Marsh Harbour, Abaco — Breaking News coming out of ABACO report tensions are now brewing on that island after a Haitian national stabbed a ‘jonser’ making him the country’s 28th murder victim in less than 24 hours.

The victim was fatally stabbed in the neck near a street called Charlie Boo in Marsh Harbour.

We know the dead man went by the nickname “Schemer” and is believed to be in his late 40s or early 50s.

Latest reports confirm that the accused is now in police custody on the island and a team from Nassau has been dispatched to further investigate the crime scene.

We are getting reports that another incident where a man was run over a by vehicle following the stabbing incident. We cannot confirm if both incidents are related, but here’s what we know.

We can confirm shortly after 8pm a vehicle struck a man [vicinity still not known]. Some are reporting that the incident was not an accident, but was intention to kill this second victim.

We are told the victim in this incident is arriving at PMH after being flown out of Abaco. His condition has worsened and he is losing plenty, plenty blood.

The situation on the island we are told is tense at this moment, and it is possible a military vessel could be dispatched if the situation gets worse.