Butler Turner don’t know what side of the fence she is on when she wakes up in the morning – Party could lose swelling support if chaos continues…. 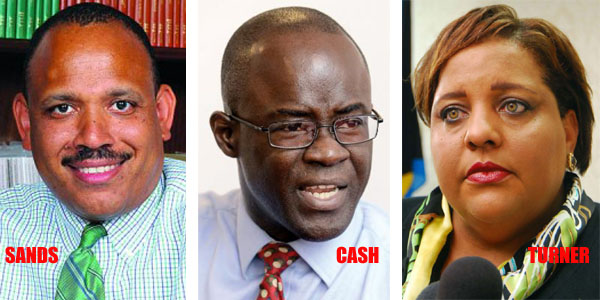 Long Island MP, Chairman and Sands looks as if they are keeping the confusion inside the party going…They together may just keep the FNM in Opposition for another five years!

Nassau, Bahamas — Just when the Free National Movement Government appears to be an alternative poised to return as the next government of the Bahamas, wild statements and bold mixup commentary from the top leadership of the party sets them back.

Examples: The FNM led with confidence the party’s position that to dismiss the ruling of the referendum would prove the Christie Regime does not respect the will of the people as expressed in the Jan. 28th 2013 poll.

Yesterday we found out that the Minister of Legal Affairs Damian Gomez said that the promise made by Obie Wilchcombe to present such a draft to make gaming legal is not realistic.

But this morning in a report in the Tribune FNM DEPUTY leader ‘BIG SEXY’ Loretta Butler-Turner “yesterday criticised the Christie administration for failing to table in Parliament regulations to legalise and tax web shops in the country.”

Now you gatta wonder who is behind all this confusion and chaos in the FNM which could keep the party out into 2017. When it isn’t Darron Cash, who said he is for legalizing the Webshops, it’s Big Sexy, who now says she is disappointed that Christie dem can’t bring the law. But just a few weeks ago it was the stated position of the party to agree for the Christie Regime to stick with the will of the people. Wasn’t it also the FNM’s position to have Bahamians vote “No” during the referendum?

So what is this now by Loretta? Is this an attempt to intentionally keep confusion within the party and then make it even harder for the opposition to gain a chance when all indications and polls today show that the FNM has gained much needed ground since May 7th, 2012?

Boy, I don’t know, but if Loretta dem keep this up – they ga sink the FNM ship for good.

Yesterday PLP Chairman Bradley Roberts took opportunity to the double take by Butler dem and capitalized on its! If voters continue to see the ball of confusion coming from people like Sands them who want to privatize the hospital and Butler and Cash dem who agree with the legalization of the number business, then it makes it looks as if the party is saying one thing as a unit and something else comes from personalities.

The organization must quickly get things together.

To the leadership of the FNM [particularly the Ruling HIGH-RANKING Councils of the Party]: take control of your ship before people like Christie, Davis and Roberts [THE CDR] begin launching missiles hard at it and implode the FNM ship for good!

In short – Loretta, Cash and Sands them ga cost the FNM a victory come 2017 if this is not quickly fixed….