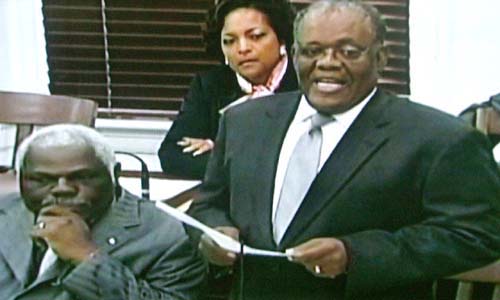 Prime Minister the Rt. Hon. Hubert Ingraham announced new increases in social assistance to the poor Monday; a continuation of the Government’s stated determination to cushion the impact of international turbulence upon Bahamians, particularly those in lower income brackets.

In the Government’s 2008/2009 Budget Communication, Prime Minister Ingraham announced provisions for a Department of Social Services allocation increase to permit meaningful increases in all areas of relief for the poor.

In its first fiscal Budget upon returning to office, the Ingraham administration increased its Social Service allocation by 20.5 percent to $31.8 million over the previous budget, with $3 million specifically earmarked for poverty alleviation.

The Government provided a further increase in its current budget of some $7 million or 22 percent, so as to increase assistance to the poor by almost 45 percent or $13 million over a two-year period.

Mr. Ingraham, during his parliament communication on the increases said: “The Commonwealth of The Bahamas has not yet achieved the status of a developed country. Nevertheless, we are fortunate to be able to enjoy a standard of living that is second only to that of the developed countries in our hemisphere.

“Our resources on a per capita basis are nowhere near those of the United States of America; still my colleagues and I believe that we have a political mandate and a moral duty to alleviate poverty in these islands; and we also have the will so to do.”

The then administration improved benefits available under the National Insurance Programme to widows and orphans, increased non-contributory old-age pensions, expanded assistance to the needy and extended the school lunch programme to include increased numbers of children from disadvantaged families in New Providence, Grand Bahama and around the Family Islands.

“It was in keeping with that policy of responsiveness to the needs of our people that caused us recently to take steps to bring relief to many Bahamian families who have been so negatively impacted by the skyrocketing cost of energy that their supply of electricity had been turned off,” the Prime Minister pointed out.

The schedule of increases as announced by Prime Minister Ingraham is as follows:
Increases in Assistance to the Poor:

* Assistance with utility payments (electricity and water) based on the production of billing and verification of need has been increased from a one-time assistance of $300 to payments totalling up to $600 per year.

* The Department of Social Services will also collaborate with the Urban Renewal Programme to assist low-income families to replace regular electric bulbs with energy-efficient bulbs.

* Provision of uniforms and shoes to children of low-income families has been increased by 15 per cent.

* Assistance for funeral expenses for low-income families has been increased from $550 to $650.

* Fire relief replacement of basic needs such as clothing and household items has been increased from a one-time payment of $2,000 to $2,500.

* Monthly payments to persons medically certified as being unable to work for a temporary period and who are not eligible for National Insurance benefits or assistance payments have been increased from a minimum of $120 to a maximum of $160 to: a minimum of $140 for a single person, $160 for a person with one dependant, $180 for two dependants, $200 for three dependants, $220 for four dependants, and $240 for five or more dependants.

* Rental assistance for low income or unemployed persons who are facing eviction has been increased from a one-time payment of $300 to payments totalling up to $1,200 per year. Payments to be made directly to the landlord.

* Minor repairs to owner-occupied homes of seniors and persons with disabilities increased from one-time payment of $2,000 to $2,500.

* A monthly allowance for children with disabilities under the age of 16, who are ineligible for benefits or assistance payments from National Insurance and whose families are having financial difficulties, has been increased from $100 for one child, $180 for two children, $240 for three children to: $120 per child.

* Work assistance payment for an unemployed needy person in a job providing charitable or community services has been increased from $190 per week to $210 per week, which is the government’s minimum wage.

Mr. Ingraham said, “I believe that the Bahamian people will welcome these increases in assistance to the poor and disadvantaged among us. I hope that we will all thank God that we are in a position to reach out to those who live permanently or occasionally find themselves on the margins of our society.”