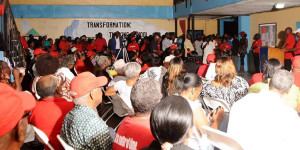 For a while there, I thought I was hallucinating when I heard that the two announced contenders for the leadership of the FNM had agreed to each, contribute $100,000 to assist with the $350,000 that it would cost to put on its July 27-29 2016 convention.

As a minimum, the perception is that political leadership is for the monied amongst us. To the best of my knowledge and belief, this happening is unprecedented in Bahamian politics and serves only to bastardize democracy in our country. Quite frankly, it is probably the most despicable thing to ever grace the political landscape of our country in a post-independent Bahamas. I believe that in the interest of democracy in our Bahamas, the application fees ought to be refunded and a remorseful apology be extended to the Bahamian people by the two applicants.

In the meantime, I beg the questions: What is it that is so ‘sweet’ or valuable to an individual who will pay nearly four times his or her member of parliament salary(4 years pay) to obtain leadership of a political party? And how do they propose to recoup their investment?
We will be naïve to think that these two individuals love us that much to pay for the chance to lead us.

It is noted that at the writing of this piece, Dr. Minnis had paid his application fee in full, while Mrs. Butler-Turner had only paid one half of hers. The handicappers are using this to suggest that the majority of the voting delegates to the convention, will certainly Roc with Doc.