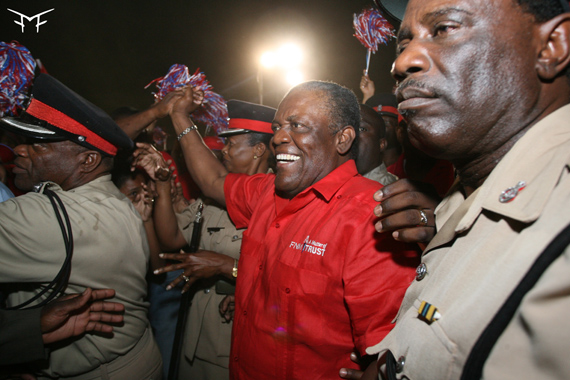 Prime Minister Hubert Ingraham being led through a political rally crowd at R. M. Bailey in 2007. FNMs welcomes the GIANT OF KENNEDY Kenyatta Gibson to the party!

Prime Minister Rt. Hon. Hubert Ingraham welcomed the MP for Kenyatta Gibson to the ranks of the Free National Moverment. Here is a full text of Mr. Ingraham’s statements.

MR. INGRAHAM: It is with great pleasure that I extend to Mr. Kenyatta Gibson, on behalf of my parliamentary colleagues and all the officers and members of the Free National Movement, a warm welcome to our parliamentary contingent and to our party.

In making his decision to cross the floor, Mr. Gibson follows in the footsteps of many distinguished Bahamian political personalities who, over the years, came to the conclusion that their membership in the PLP was no longer tenable.

He has obviously come to the conclusion that the people of the Kennedy Constituency and the wider Bahamian community would be better served by his membership in the Free National Movement.

In keeping with the tradition of our party, I should like to assure Mr. Gibson that he will find a warm welcome at all levels of our party and that he will immediately be accorded all the privileges of full membership.

We look forward to working with him to further the interests of the Bahamian people whom we have the honour to represent.
Statement by Kennedy MP Kenyatta Gibson:

MR. GIBSON: I wish to publicly announce that I have today informed the Speaker of the Honorable House of Assembly by hand delivered communiqué, that I have joined the Free National Movement’s Parliamentary Caucus.

This decision was arrived at after a carefully conducted consultative process, during which I listened to and deliberated with residents of the great Constituency of Kennedy throughout the length and breath of the Constituency.

Every effort was made to weigh all possible options in the balance. Indeed my paramount consideration was to act in the best interest of the people of my Constituency.

The founding fathers of this Commonwealth had in their ranks great Bahamians of different origins and different creeds. In their midst were men who proclaimed themselves members of different political parties. Some were loyal PLPs, others pledged allegiance to the FNM.

Yet through their partisan differences, their love of “Country First” was the principal and overwhelming theme. It is in the best tradition of those framers of our constitution and co-architects of the modern Bahamas that I have made this decision. Rightly, I have put my Country and my Constituency above my former party.

As such, I have no reservations in stating that I believe that my decision to join the Free National Movement at this point in time is in the best interest of my Constituents and my Country. In this regard, I shall make a full and plenary statement at the next sitting of the Parliament of the Commonwealth of the Bahamas.

May God continue to bless my Constituents in all the Communities of Kennedy and the Commonwealth of the Bahamas.