— Bahamas Press today is breaking news out of the Ministry of Tourism this morning, and we report our Sunday Special early because firstly; today marks the beginning of Holy Week and we want to tune down the cut hip on the Outgoing FNM REGIME!

Secondly, we want the Torch and in particular, the paid operatives coming on this global portal to spin, to quickly respond to this article before we reveal the rest of the story.

Concerns emanating out of the Tourism Miami Mission Office are frightening to say the least. Sources in that agency confirmed to BP they received letters from Tourism’s head office in Nassau indicating the Government’s unwillingness to continue housing allowance payments for workers stationed in foreign.

The government we are told in explaining the cutback, told staffers the cuts are due to drastic financial problems being felt by the finance department and thus, such benefits are terminated immediately. No notice, no warning, dog each ya lunch; literally.

Workers in that division tell us, they have tried to get a response from almost every senior officer in the government, but their pleas have fallen on deaf ears. Some tell us attempts to contact BPSU President, John Pinder, were fruitless.

Bahamas Press is concern about this because we have since learnt of an interesting appointment in that same Tourism Office.

BP has learnt government officials in the Miami Office recently hired a FOREIGNER as a consultant. The individual BP can allege, is on a contract; making a whopping, one hundred and twenty-five THOUSAND DOLLARS [$125,000.00] every three months. Here’s where the story gets interesting.

Sources in the department tell us the “CONTRACTED FOREIGN CONSULTANT” since his contract began in January this year, has taken the liberty to visit the office only once every other week and during those times have spent less than half a day at the mission.

Sources in the finance department tell us, no one knows what this “FOREIGNER” does. “We don’t know what he is in the department to do, he is definitely not contracted on any project for the Ministry of Tourism, nor does he appear to be lending any of his skills to the department,” a MOT senior person told BP.

Could this “CONTRACTED FOREIGN CONSULTANT” be some political strategist brought in by the OUTGOING FNM REGIME at the taxpayer’s expense? 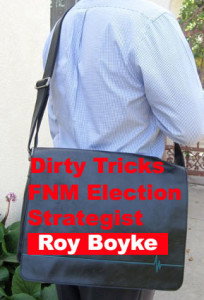 The same was done back in 1996, when regional political strategist, Roy Boyke, was brought into the country by Hubert Ingraham and was handsomely paid by the Ministry of Tourism leading into the 1997 general elections? Roy served as a consultant then in the Marketing Department at the Ministry.

Has the FNM fallen so dangerous, so CORRUPT that it would abuse the public purse and commit such SCANDALOUS BACKSIDE RAPE OF THE PEOPLE OF THE BAHAMAS; choosing to pay some Foreigner with taxpayers dollars in the thousands, while at the same time throw hardworking government employees under the bus? The thought is chilling!

We call on the minister of tourism, Vincent Wallace, to name the operative contracted at the public expense in the amount of ONE HUNDRED AND TWENTY-FIVE THOUSAND DOLLARS [$125,000.000] for EVERY THREE MONTHS.

We also ask the minister to state the functions assigned to the contracted worker in the Miami Office. We want to know why he is there and what is he doing at such a hefty payroll; PAID MORE THAN A MINISTER?

We also want to know, why is it convenient for the Outgoing Ingraham FNM Regime to hire a foreigner at such a drastic fee, and in the same breathe, tell Bahamians sacrificing distance from their love ones, they now must pay their own way?

IS THIS THE NEW WAY OF THE FOREIGN NATIONAL MOVEMENT; to grease, oil and garnish a foreign operative at the expense of taxpayers while government employees are squeezed? WE DEMAND AN ANSWER!

Ya know, SOME PEOPLE HAVE NO DAMN SHAME!