Smith continues to give the Bahamas a bad name in the world. He claimed that the government was operating Auschwitz, a Nazi death camp at the detention center and has accused the government of ethnic cleansing. 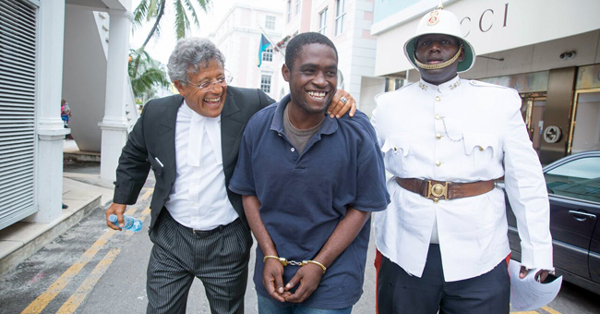 Fred Smith and Jamaican National Sewell makes a joke of the system!

Smith and Save Da Damn Bays threatened to JAIL THE PM AND DPM! Who yinner think paying dem?!

Nassau, Bahamas – The following is a statement by Bradley B. Roberts, National Chairman Progressive Liberal Party:

As often as Fred Smith continues to spread untruths, exaggerations and falsehoods in the public domain, the Progressive Liberal Party is resolved to attack them and reinforce the principle of the prevalence of the rule of law.

Fred Smith is on record in opposing the government of The Bahamas in legally carrying out the laws of The Bahamas. Smith is opposed to enforcing the immigration laws of The Bahamas and the protection of our territorial borders.  He said that the government was operating Auschwitz, a Nazi death camp at the detention center and has accused the government of ethnic cleansing. These are all gross untruths that Fred Smith continues to spew into the public domain to harm the international reputation of The Bahamas and to stir up incitement and civil unrest. This is disgraceful and with each exaggeration Mr. Smith brings great disgrace to himself, the Bahamas Bar Council of which he is a member and he undermines the integrity of the human rights community generally.

With the lawful demolition of a shanty town in Gamble Heights, Fred Smith has again misrepresented the truth and encouraged lawlessness and public incitement with his tissue of lies surrounding the legal enforcement of the law.

All lawful notices for the removal of this unlawful settlement were served according to law, first in November 2014 and again in September 2015.

FURTHER, SHANTY TOWNS ARE ILLEGAL AND NO AMOUNT OF HYPERBOLE AND FALSEHOODS BY FRED SMITH AND THE GBHRA CAN AND WILL CHANGE THAT FACT.

The country’s building codes and the provisions of the law in building residential communities are clear.

People who are not nationals of The Bahamas living in this country without permission when found are subject to arrest and repatriation. Immigration officers have the power in law to do so. There can be no backing away from this position.

Legal migrant workers on work permits currently living in shanty towns must seek the assistance of their sponsor and employer in securing proper housing facilities.

Bahamians must not forget that two persons were killed in Gamble Heights in the last year; one was the result of a brazen gunfight with police where the police returned fire, killing an assailant. There was another incident where a police cruiser was extensively damaged.  Immigration officials had to withdraw from the area when their bus was stoned. Mr. Smith would have this illegality continue.

I encourage and appeal to Bahamian families living in sub standard housing in shanty towns to seek social assistance at the Ministry of Social Services and Community Development but do not continue to be a part of an illegal commercial enterprise; shanty towns are illegal commercial enterprises that undermine the rule of law and all related housing, environmental and sanitation regulations.

I implore all to work and cooperate with the relevant government agencies in ridding this country of shanty towns and regularizing our housing industry.