Parents don’t know if they teaching or learning from the children these days… Is Statutory Rape still a crime? 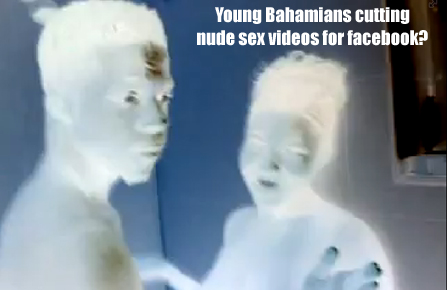 Nassau, Bahamas – We know it is now Spring Break and it is that time of year when girls go wild and boys go bad, but what is being posted all along Facebook these days cannot be acceptable.

We could not believe it.

A still shot of the “two-in-da-tub” in minutes went viral on BP; forcing more than 200 comments to be posted under the photo in 23 minutes.

Showing little nudity, BP posted the headline comment: “Look what the people ‘churrin’ come to in the Bahamas – Cutting live SEX video for all to see.”

Now this is news for us because first of all this is Lent. A time of fasting and prayer – sacrifice and penance.

This is a time when the Church [PEOPLE] suppose to be in a period of reflection and atonement. But when you see what the ‘churrin’ doing today in that video, one leaves one to wonder – Where in the hell are the parents these days?

While one of the boys sex his way into every position there is with the young girl; a videographer is in the shower with the couple shooting at every angle he could find.

At one point the pair was seen like Hollywood stars smiling as if they had reach the pinnacle of their career; and being so intensely gratified – they paused for this shot on the Red Carpet seeking an Oscar Award for having produced the “Best Action Film On Low Budget”.

What ever happened to Dora the doll, shooting marble and spinning top?

Children in the Bahamas today are sexing more than their parents; many of whom [parents] can only drink red bull, fall sleep and remember their Bahamian Pastime experiences!

Our children are lost; having no pride, self-respect; and have no thought of what is decent, moral and right anymore!

A GENERATION OF VIPERS!!!!

After seeing this video all we could say is this: Here goes another child who went missing somewhere where she don’t suppose to be and here is some WUTLESS young man who – in his urge to get peace – would commit statutory rape and don’t give a damn!

We gata pray for our young people – and some need a good cut-yinner-know-what-we-want-say!

Everyone blaming the government, but when will some in media begin to get down on these wutless parents?

Children in the Bahamas are sexing LIVE on Facebook these days and are posting the action for all the world to see.