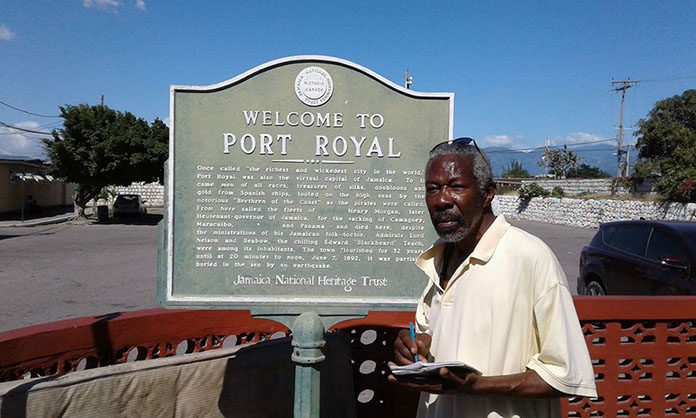 Port Royal, Jamaica: This coastal community lives on the edge.

Once called “the richest and most wicked” city in the world, Port Royal was also the virtual capital of Jamaica.

To it came men of all races, treasures of silks, doubloons, and gold from Spanish ships looted on the high seas by the notorious “Bretheren of the Load” as pirates were called.

From here sailed the fleets of Henry Morgan, Lt Governor of Jamaica, for the sacking of Camagua, Maracailiot, and Panama.

He died in Jamaica despite the ministrations of his Jamaican folk doctor.

Admiral Lord Nelson, Benbow, the chilling Edward “Blackbeard” Teach were among the inhabitants of Port Royal.

The town flourished for 32 years until 20 minutes to noon, June 7, 1692, it was partially buried in the Caribbean Sea by an earthquake.

One of the casualties of that event was St Peter’s Anglican Church. The present structure was completed in 1726 to replace the original church which sank below the waves.

Remnants of Port Royal being a garrison town abound including a huge fort.

Jamaicans refer to Port Royal as “a lonley town”. Population remains sparse. It never fully recovered since that cataclysmic event.

As my two-month sojourn in Jamaica continues, in my Saturday post we will be ‘Talkin Jamaican’.