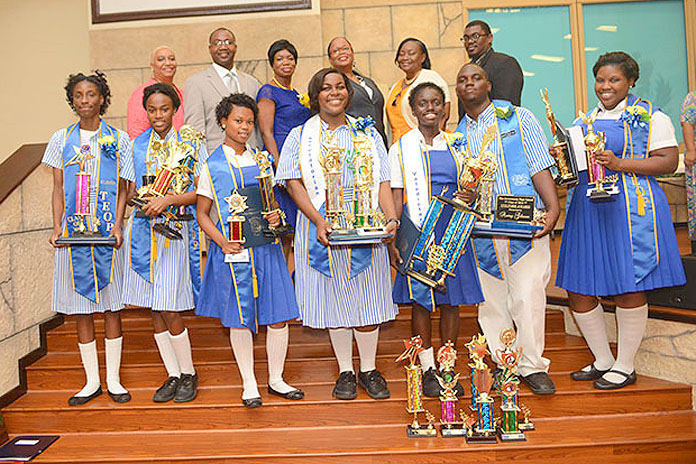 Nassau, The Bahamas – Le’Andra Mackey, the Valedictorian of the Government High School (GHS) class of 2016 was announced the winner of the Tristar Education Optimization Program (TEOP) during the GHS commencement exercise held on Friday, June 10.

As the winner, Mackey receives a $40k, four-year scholarship to attend the The College of The Bahamas and entry into their prestigious President’s Scholars Program.

“I was really happy and relieved when I heard my name called as the TEOP winner,” stated Mackey. “I was happy because I knew I tried my best and thought positively so I got positive results. I was relieved because I knew it would have been very difficult for me to go to college without a scholarship.”

To commemorate its tenth anniversary, Tristar Insurance Brokers & Agents Ltd. made a strategic decision to forgo the traditional anniversary celebrations and invest their anniversary budget in education instead.

“We are directly affected by the level of education within the pool of applicants from which we select our team members, so we understand intimately the need to consistently invest in the education of The Bahamas’ most valuable resource – our youth,” stated Harold Antor, President of Tristar Insurance Brokers & Agents Ltd. “TEOP took on a life of its own and we are deeply moved by the strides all of the students have made since enrolling in the program and the great things we know they all have in store.”

Thirty eleventh and twelfth grade students at GHS were inducted into the TEOP program in November 2015. The pilot program provided targeted corporate mentoring and financial support to the Government High School throughout the 2015/2016 school year.

Government High School was selected by an independent selection and advisory committee as the beneficiary of the TEOP program after beating out four other public schools. The advisory committee is comprised of business and education leaders in the community including Davinia Blair, Director of Advancement (Interim), The College of The Bahamas; Elma Garraway, former Ministry of Education Permanent Secretary; Andrew Roberts, HR Director, John Bull and Debra Symonette, Financial Controller, Super Value.

Over 28 weeks, the students interacted extensively with their mentors and engaged in presentations, debates, and character building activities, including a dream board party hosted by Keshelle Davis.

Led by TEOP coordinator Annis Albury, the students studied the principles outlined in the book The Seven Habits of Highly Effective Teens.

“Sharpening the saw, was the main habit I realized I needed to develop,” stated Mackey. “That habit helped me to realize that after I ran myself into the ground doing an assignment, I had to get myself back to equilibrium. It also made me more serene as I took Mr. Covey’s advice on how to sharpen the saw.”

At the culmination of the program the students, all from varying academic ability showed an average half point GPA increase. Seven of the top ten students in the GHS class of 2016 were TEOP members.

Mackey was one of three finalists including Celine Ferguson and Laneisha Forbes who went through a rigorous selection process conducted by an independent steering committee of representatives from The College of The Bahamas and the TEOP Advisory Committee.

The three finalists submitted detailed applications for acceptance in the COB President’s Scholars Program. They were then interviewed individually by the steering committee to assess their leadership, critical thinking and communication skills. In addition to the interview process, the finalists competed in the Tristar Rising Star speech competition under the theme “Challenge Accepted” How I Consistently Overcome Adversity to Achieve My Dreams.” Each student gave moving seven minute speeches outlining the challenges they have encountered and surmounted in their lives thus far.

During her personal interview Mackey addressed the judges in French, which she speaks fluently. During the speech competition, she spoke without the use of note cards and delivered a moving speech which highlighted her emotional struggles after losing her father in 2015 and her determination to raise her GPA despite her loss.

“TEOP helped because I knew whenever things got overwhelming I had someone to talk to,” stated Mackey. She plans to major in biochemistry and biology when she enrolls at COB in the fall. Her ultimate goal is to become an anesthesiologist.

“We hope to partner with other organizations to expand the reach of TEOP to other public schools for the 2016/2017 school year,” stated Antor.

TEOP is yet another pillar in Tristar’s corporate architecture which demonstrates community commitment and builds on its mandate “Bright Minds Providing Innovative Solutions.” It supplements Tristar’s Broker Development Program launched in 2014 designed to identify and train the next cadre of insurance sales executives and entrepreneurs.