Questions remains unanswered almost two years since put by Bahamas Press – Bahamian Oil Exported for $2 per metric ton! Why new Administration has not cancelled the lease?

THE SAND MAN RAIDING THE NATURAL RESOURCE OUT THE COUNTRY! – BP rebroadcast this report as we have gotten word that aragonite goes for $900 per metric ton on the world market….

Nassau, Bahamas –– There are many things that appall us about this government, but when conflicts and scandals arise, the WUTLESS media goes silent. And that really angers the persons behind this website.

Bahamas Press has uncovered a serious rip-off here in the country and when you look into the incident, the crime traces back to the OFFICE OF THE PRIME Minister.

Now get this: sometime before JUNE 2010, a request was made of the government to approve the export of Bahamian sand [aragonite] out of the country by a company called Ocean Cay Limited.

At a lease of $2.00 per metric ton [which is somewhere around 2,200 lbs], the Ingraham government granted the company a $7,500 per year lease on the island called Ocean Cay for the company to operate.

Bahamas Press has been advised that, since their approval back in 2010, the company is believed to have yet to pay the government on the millions and millions lbs of sands extracted and shipped out of the Bahamas.

Information supplied to us by sources in the OPM confirms much of the sand was sold to an oil company, which experienced an oil spill in the US recently.

We are told, according to that source, millions upon millions of dollars have been paid by private companies in the US for the sand, which is used to make glass and other items.

And so, as we open a public trial on this new development, BP would like to put the questions:

Does Hot Mix and or Tony Myers have any contracts with Ocean Cay?

What role does the company, Tycoon Management Co. Ltd., and its Principal, Mr. James Edgar Curling, have in Ocean Cay?

How much aragonite has been exported? How much Royalty has been paid to the Government?

Who is monitoring what is being exported out of Ocean Cay?

Why is the lease payment on such a highly prized natural resource only $7,500?

Who are the Special Interests benefitting from the mining of this commodity?

Can the PM confirm or deny whether his Crony and Lackey, James Curling, is engaged in the export of sand?

What is the FNM/PLP Government’s stance on the export of Sand and is this not a natural resource like oil, the sale of which should be a benefit to the entire Bahamian population?

And why would anyone agree to sell a natural resource for $2 per metric ton when on the world market aragonite [Bahamian Sand -WHITE GOLD] sells for $900 per metric ton? 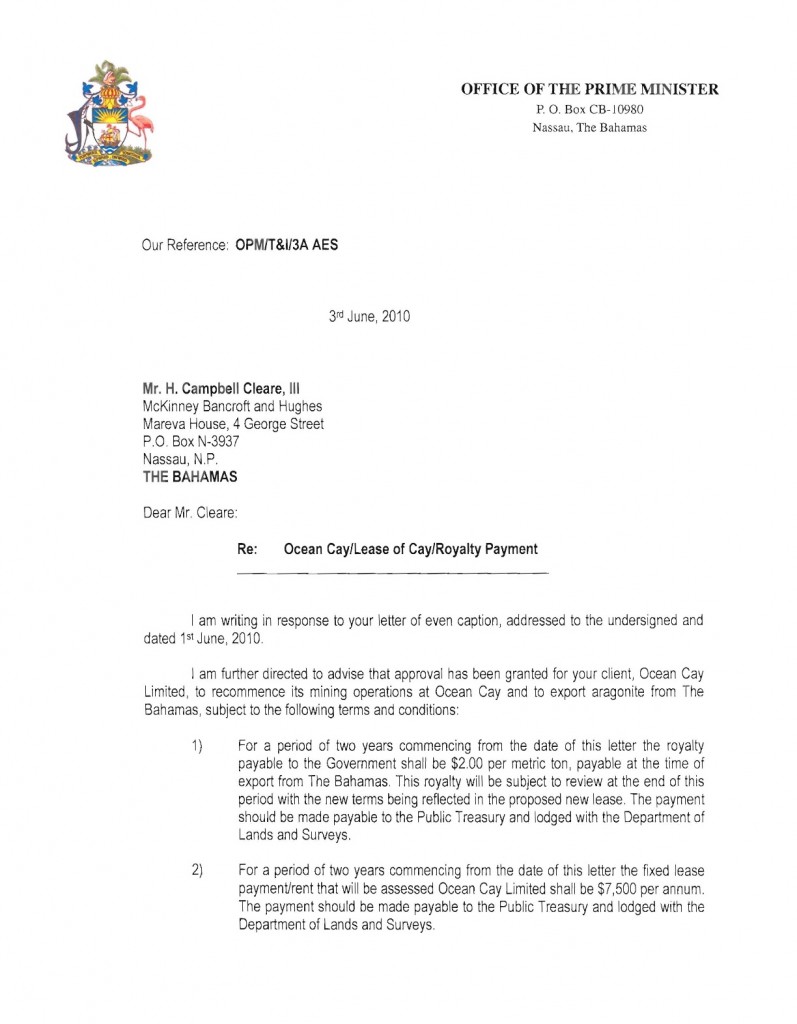 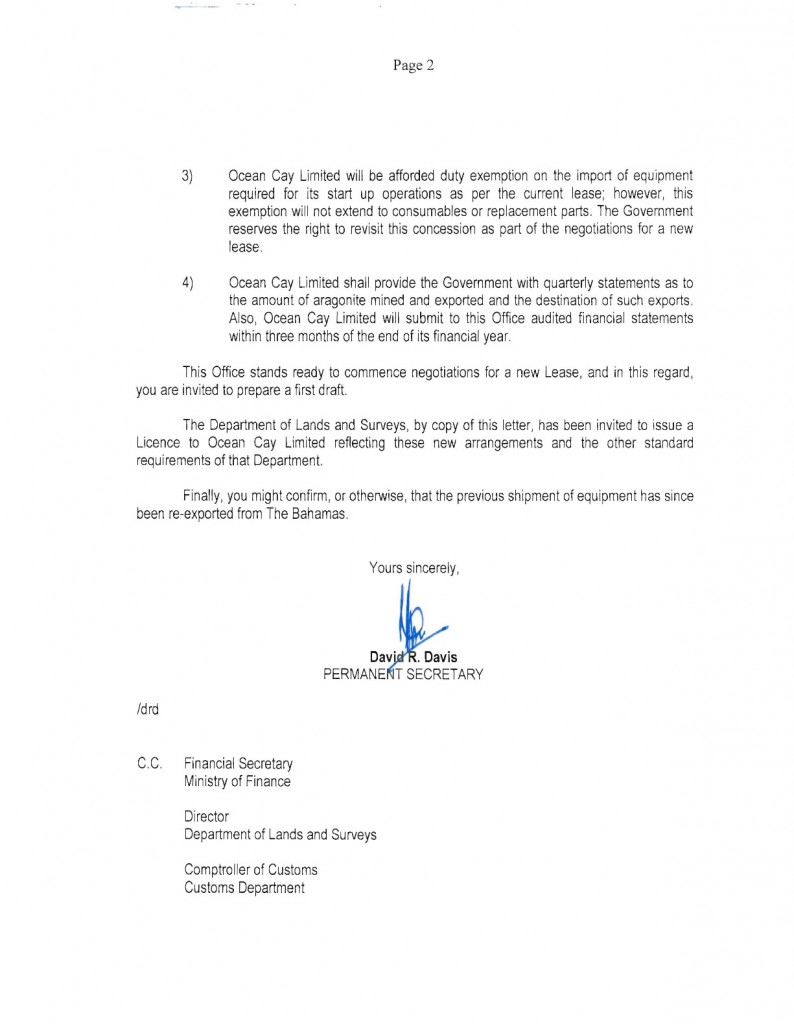 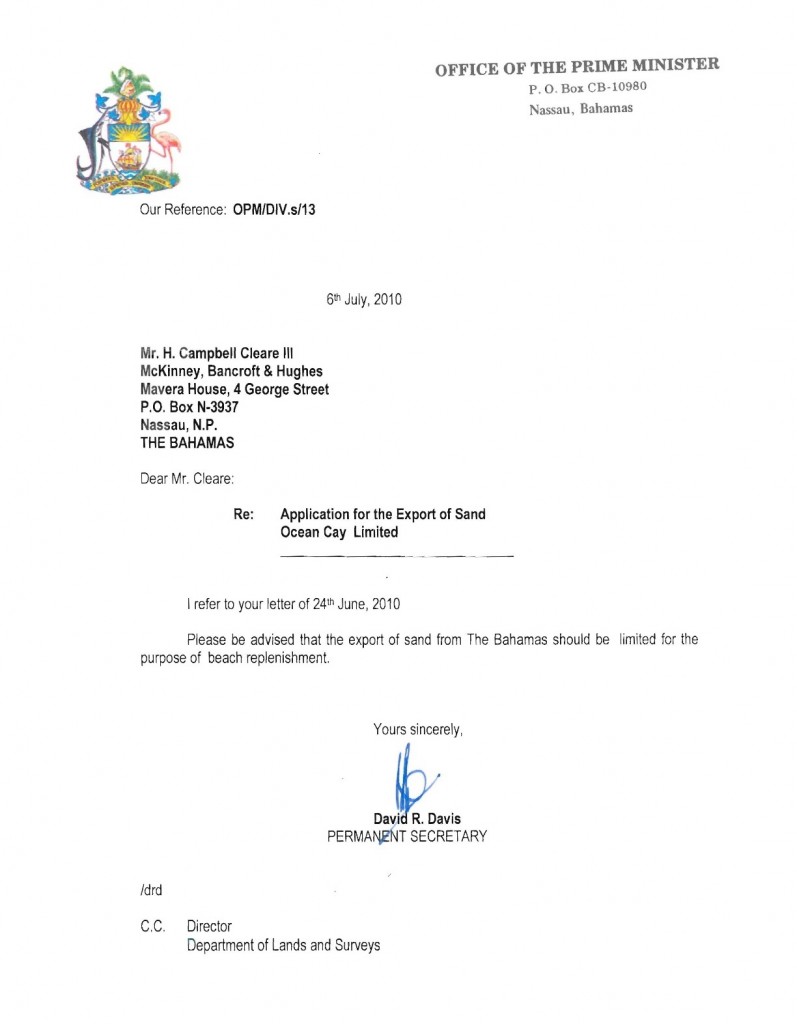