What in da hell is dis? Another PISS POOR SHOWING by the Opposition…Why yinner think no one wants dem to run the country? 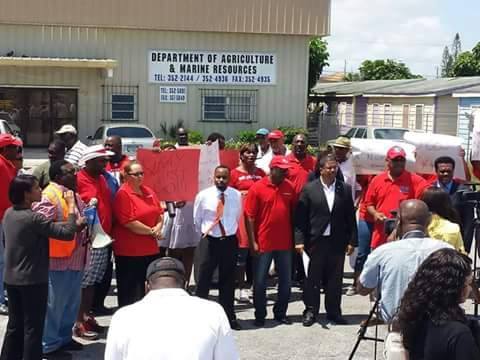 ANOTHER FLOP SHOWING OF THE SWING TRAIN IN THE FNM…less than 20 persons out of all Grand Bahama showed up at an FNM protest today…One woman told BP…”We cannot even get Grand Bahamians to show up…our message is not resonating…..”

Another poor showing at an FNM Protest – Party message not resonating not even in FNM COUNTRY!

Nassau, Bahamas — Not only was the gathering of some 20 persons at the FNM protest against Minister Gray a flop, but what BP uncovered at the scene was even worse and proves an absolute abuse of power!

A woman attending the charade pointed BP to a government vehicle parked in the area driven by one of the protestors in the heat of the day.

One of the Transport Drivers, who attended the event, is a very known FNM, and his assigned government vehicle is shown here all ‘crease up’ and parked during the demonstration. The vehicle is registered to in the PHA and is used as a transport vehicle.

Now, BP only ga say this once… If you ga go to an FNM event in the middle of the day to protest against the Government of the Bahamas, why in the hell do you have to use the government vehicle?

We bet ya Minnis sees not a damn thing wrong with this!