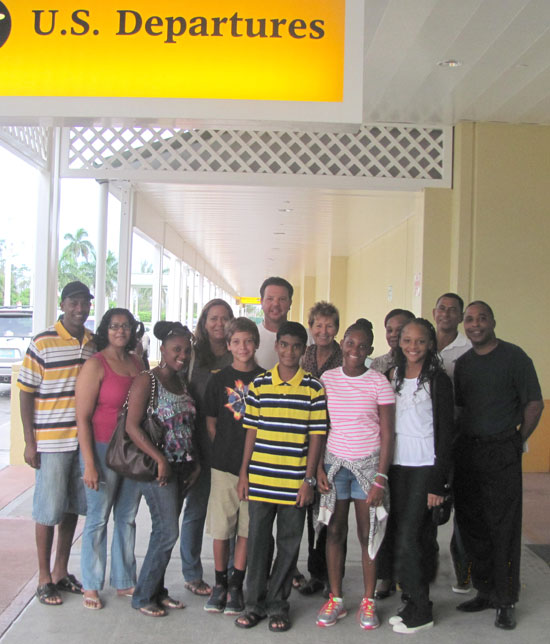 Miami here they come! The four winners of the Grand Bahama Soccer Camp top prize, with their moms and dads and coaches, pose at Freeport International Airport Sunday before heading off to Florida.

Manchester won their semi final against another iconic pro club Real Madrid in front of 109,000 fans – a figure one third the size of the entire Bahamas population – in Michigan on Saturday and another huge turnout is expected tomorrow.

Apart from the game Kadicia, Kourtni, Donte and Cameron’s all-expenses-paid trip includes a visit to Miami Zoo and an airboat trip round the Florida Everglades followed by a visit to an alligator farm with time also for a bit of retail therapy.

The youngsters won their trip of a lifetime after being chosen as the four who stood out most at the camp, not just for their skills but their all-round attitude and enthusiasm during the week-long event at Freeport Rugby Football Club in June.

The prize was awarded to mark the 10th year of the camp which has become the biggest and best summer sports camp on the island. It was sponsored by the English Premier League, which has been involved in the camp from the start. It is the world’s most-watched professional sports league with several billion people watching games in person or on TV.