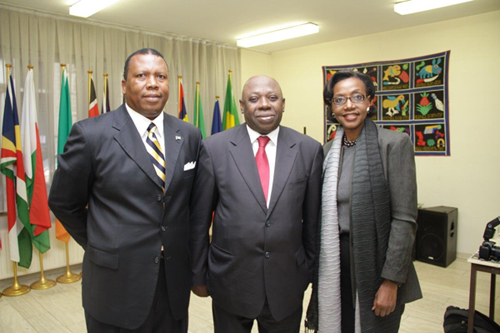 His Excellency Picewell Forbes, Bahamas High Commissioner to CARICOM and Member of Parliament for South Andros. Her Excellency Rhoda M. Jackson, Ambassador and Permanent Representative to the United Nations Office in Geneva

Brussels — The Bahamas’ delegation to the ACP Parliamentary Assembly Meeting and the Inter-sessional Meetings of the ACP-EU Joint Parliamentary Assembly was led by His Excellency Picewell Forbes, Bahamas High Commissioner to CARICOM and Member of Parliament for South Andros.  Her Excellency Rhoda M. Jackson, Ambassador and Permanent Representative to the United Nations Office in Geneva also attended the meetings.

The ACP Parliamentarians met to consider the work of the three Committees of the Joint Parliamentary Assembly in preparation for discussions with their European counterparts. The Committee on Political Affairs provided an overview of the political situation in several African countries and noting the outcome of recent  elections in the region that of Mali, Zimbabwe and Ghana.  The current dispute of the Mayotte in the Comoros posed a concern to several ACP members as they called for the support of the ACP group for the Government of Comoros and for an end to colonial imperialism.

The Report of the Committee on Economic Development, Finance and Trade stressed the need for the sustainability of public debt through capacity building and increased technical cooperation and noted that greater debt relief would be a critical measure for the eradication of poverty.  The  ACP Parliamentary Assembly applauded the efforts of CARIFORUM to advance that region’s opportunities for increased trade benefits from the European Partnership Agreement.  It further reiterated the importance of south-south cooperation to ensure that developing countries create the proper environment to enhance trade among ACP members.  High Commissioner Forbes informed the Assembly of The Bahamas’ ongoing efforts to implement the EPA through the establishment the National Economic Partnership Agreement Implementation Unit (NEPAIU).  The High Commissioner also outlined the particular concern of The Bahamas and its graduated position which makes it ineligible for loans from international financial institutions.

The Committee on Social Affairs and Environment highlighted social discrepancies such as gender inequality and the treatment of disabled calling on ACP members to provide the necessary tools to enable the full participation of marginalised groups in their respective societies.