Ministry of Works Minute Paper below exposes FLOYD WILMOTT! Papa broke the cookie jar and is now eating the splinters

Nassau, Bahamas – Talking about ‘Cookie Jar’– in light of the recent string of lies and innuendos by Prime Minister Hubert Ingraham – BP is compelled to continue its recent expose on Mr. Ingraham’s retirement home.

Our impeccable sources are bewildered and shell-shocked at the brazenness of the FNM Chief who continues to accuse others of having their hands in the cookie jar to draw attention away from his ‘ghost moves’.

PLP deputy leader, Philip Brave Davis, during the campaign remarked that it is amazing how, after all of the cries, not a single politician has been prosecuted and has pointed out how the FNM Chief himself has been caught with his hands and both feet in the biggest cookie jar of them all.

What is indeed true is that when the PLP left office, the FNM accused them of having hands in the cookie jar, but today as the FNM gets ready to demit office there is no Jar – not even crumbs visible.

Although it is required by law, there is no building permit posted at the entrance to the property where hubert Ingraham’s retirement home sits. No building inspections are being carried out by Ministry of Works Building Control Department to ensure that the required structural standards are met, which begs the question: was the proper protocol followed in assigning Water & Sewerage Account No. 170235-162860.

This type of behaviour is typically displayed by illegal immigrants and miscreants, not by average law-abiding and tax-paying Bahamians.

We can only believe the decision to do this, however, was to minimize exposure of the details of the actual construction. But Bahamas Press is not shielded from such information as our sources sit high and low, deep and wide, all across the country. For, as you know, we are everywhere. 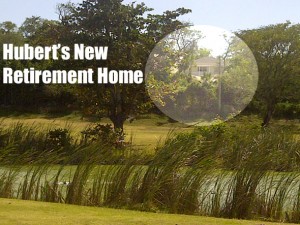 Factual records shown to us prove that Iram Lewis, BP’s named ‘Buffed Roomate’, is the Architect of record for the PM’s new house.

The supplier of materials, sand, rock, etc., for the house is Tycoon Management Ltd. (owned by Ed Curling). He, as you would know, supplied blocks and sand at one time to one Rodney Moncur.

Tycoon’s President, Ed Curling, is said to own a house on the canal at Old Fort Bay overlooking a docking facility in that gated community. Sources tell BP that this is where you will find the Prime Minister’s private yacht moored. And from that place, on any given weekend and sometimes when the pressure gets heated in the Cabinet, you will find him pitching onboard to make his special excursions of rendezvous.

Tycoon Management Ltd. is one of the members of the Group of 19 that controls the Arawak Port Development Company [APDC].

James Ed Curling sits on the APDC Board and is a close fishing friend and buddy of PM Hubert Ingraham. And here’s where our investigations get deep.

With all of the security at the new Port, one would have to be very powerful to arrange to have a trailer leave there in the middle of the night.

Last October, Telco Enterprises Ltd. (again, owned by FNM Council Member and Trustee Floyd Wilmott ) was awarded a fifteen million dollar contract [$15,000,000] to create a suite of offices at BahaMar next to the Casino.

Many of you will remember how Iram ‘Buffed Roomate’ Lewis was the Project Manager for the National Stadium [NOT ARCHITECT AS CELEBRATED LAST NIGHT DURING THE OPENING CEREMONIES].

“Buffed”, as he is affectionately called, was also caught up in a series of scandals at the National Insurance Board. You would remember the Prime Minister promised while on his feet in the Parliament to report back to the House following reports of Corruption and COLLUSION at the nation’s social security agency, but the Prime Minister never returned with those answers.

On September 10th, 2010 your Bahamas Press exposed further revelations of CORRUPTION at NIB demanding a Royal Commission to investigate the SCANDALOUS OPERATIONS at the Board – INCLUDING THE CONTRACTS ISSUED TO KENUTH Knowles, PORKY DORSETT, IRAM LEWIS, Charlton Morley AND Jeffery LLOYD, just to name a few. The PM who is minister for NIB is yet to respond. We wonder why? CLICK TO READ: https://bahamaspress.com/2010/09/…tracts-at-nib/

But let’s back to the contractor of the bungalow.

Wilmott, as many remember, was infamously awarded a no bid contract to renovate the Police Commissioner’s Official residence located at the police headquarters on East Street North. After this ‘ghost move’ was exposed, the PM’s Office quickly went into damage control mode and announced that the renovation of the police commissioner’s residence was going to tender with a more competitive selective bidding process that included six construction companies. Telco Enterprises – to nobody’s surprise – still ended up getting the contract. SEE MOW MINUTE PAPER BELOW!

Wilmott, one of the bag-men for the FNM during the failed Elizabeth ‘buy-election’, also got a hefty contract with $8.6 million of the National Insurance Board’s money when the contract was awarded to his company, Telco Enterprises, for the completion of the Sandilands Rehabilitation Centre – with only two companies bidding.

That contract was awarded early in January 2010. Work at the Sandilands Rehabilitation Centre had been 75% completed by a former contractor up to that date, and but it is still incomplete two years later. It has been alleged that these funds awarded to Telco were used to fund the by-election as it is reported that the FNM dropped big money on the ground in that losing effort. This contract is now overdue by six months; however, Hubert Ingraham has clearly turned a blind eye.

The FNM, during that “buy-election”, issued some SEVEN MILLION DOLLARS IN PUBLIC MONEY and OVER ONE MILLION IN PARTY FUNDS!

Not a word on the progress of the centre has been carried in the WUTLESS DUTTY MEDIA EITHER! But we ga show them how a REAL PRESS CORE WORKS!

The most recent word around town is that Wilmott was the henchman responsible for stealthily moving a container filled with FNM political paraphernalia from Arawak Cay in an attempt to evade paying customs duty. It is reported that he may have caused the firing of Customs Chief Glenn Gomez for having the gall to track down Bahamians attempting to raid the customs cookie jar. With all of the security at the new Port, one wonders how this can happen. One would have to be very powerful or a magician to move a gigantic trailer in the middle of the night with no one knowing about it.

BP has done the groundwork and now invites the members of the fourth estate to join our cry and demand that PM Ingraham – without delay – make available to the Press details of all contracts and transactions in connection with his new house currently under construction before Bahamas Press has to tell the rest of the story.

We call on the PM to make himself available to answer any and all questions relating to this clandestine, surreptitious, hole-and-corner building under construction owned by him.

When we examine all the corruption in the material above one no doubt must join the words of Perry Christie: They in the FNM should be asking for forgiveness and not votes!

Bahamas Press is calling on leaders attached to the incoming PLP Administration to – immediately upon taking office – launch an extensive investigation into suspicious contracts, many of which went out by selective tender, that were granted to Floyd Wilmott’s company, Telco Enterprises.

And we urge the new government to force a repayment back to the Public Treasury every dime – with interest – on contracts paid for services not rendered. 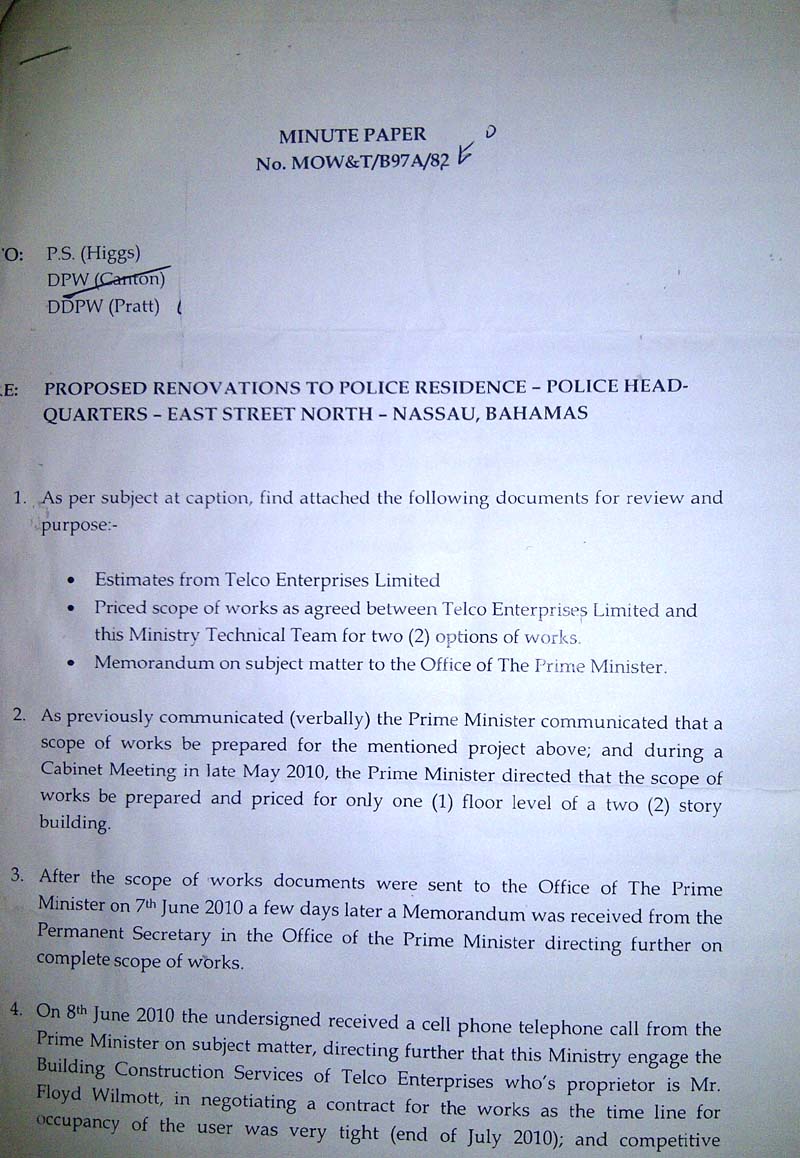 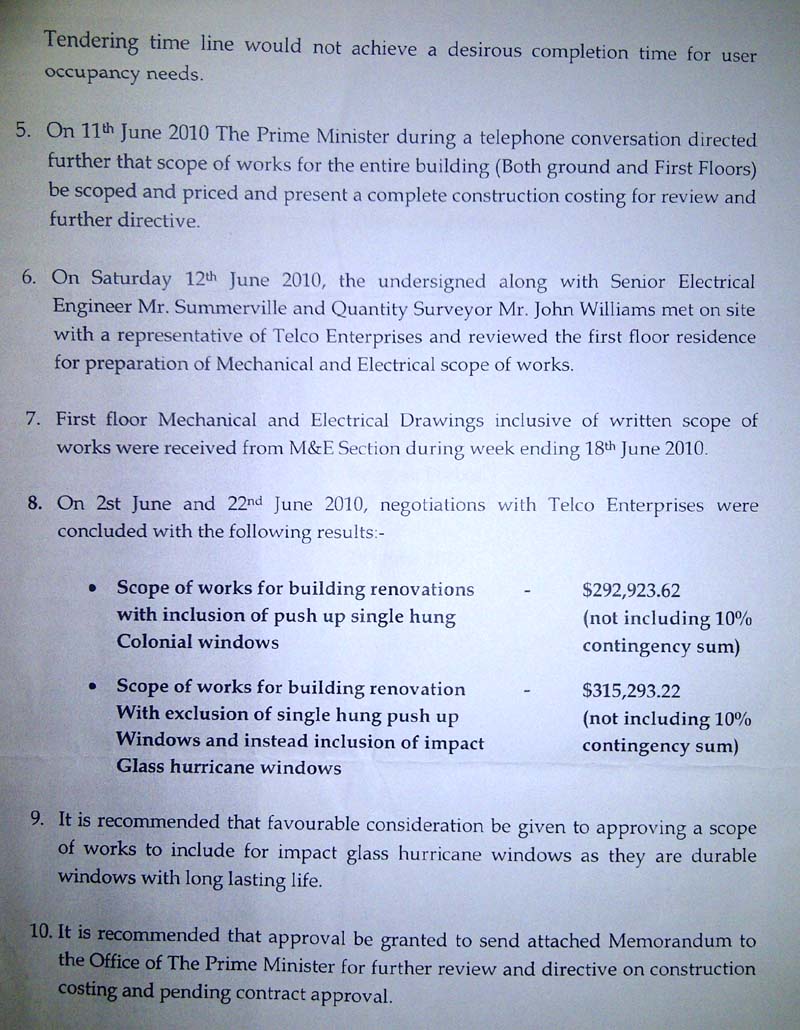 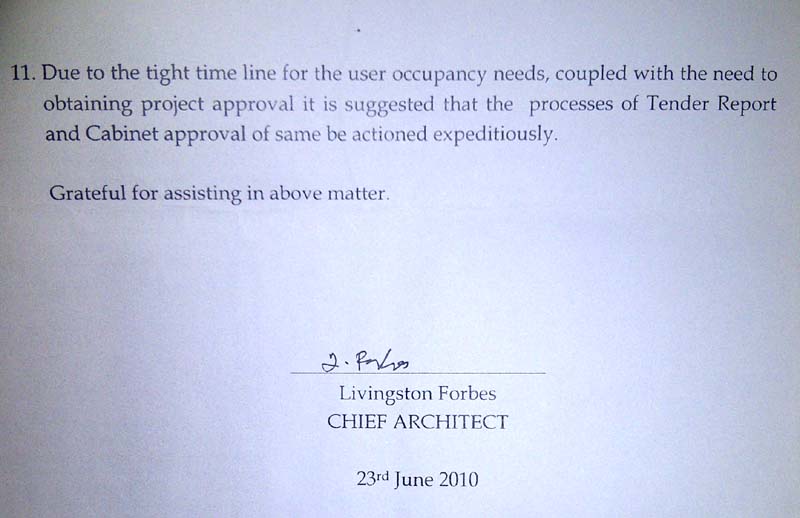