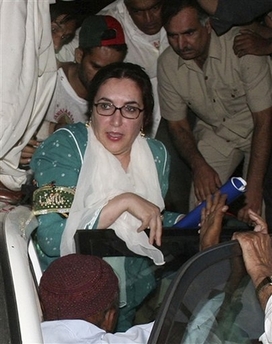 Former President of Pakistan being lift off a bus in October after narrowly escaping an explosion that killed 126 of her cheering supporters as she returned to Pakistan after years in exile.

Nassau, The Bahamas – Upon her return to Pakistan, former President Benazir Bhutto narrowly escaped a bomb blast that killed over 126 cheering Pakistanis. Today her killers took her life in an assassination that has caused an eruption of violence.

Prime Minister Hubert Ingraham in a press statement today called the death of the former President as a tragedy, expressing his deepest sympathy to her family on behalf of the people of The Bahamas.

“When former President of Pakistan Benazir Bhutto returned to her country a few months ago after a long exile, it was acknowledged that she was exposing herself to great danger because of the volatile political situation in her country.”

“Nevertheless, her assassination today has left much of the world in a state of shock and grave concern for the future of Pakistan, the region and the world.” Prime Minister Hubert Ingraham said.

President Pervez Musharraf denounced what he called a terrorist attack and appealed for calm after angry backers of the slain former prime minister took to the streets across Pakistan, from the Himalayas to the southern coast.

The unrest was predictably fiercest in her native Sindh province and its capital, Karachi.

“Police in Sindh have been put on red alert,” said a senior police official. “We have increased deployment and are patrolling in all the towns and cities, as there is trouble almost everywhere.”

Reports said security was deteriorating in Karachi, where thousands poured on to the streets to protest. At least three banks, a government office and a post office were set on fire, a witness said.

Tires were set on fire on many roads, and shooting and stone-throwing was reported in many places. Most shops and markets in the city shut down.

At least 20 vehicles were torched in the central Sindh town of Hyderabad.

There were also small protests in Rawalpindi and the nearby capital, Islamabad.

Protesters blocked roads with burning tyres and chanted slogans against President Pervez Musharraf in Muzaffarabad, capital of Pakistani Kashmir in the mountainous north.

Police said they had been ordered to block the main road between Punjab province and Sindh province, apparently to stop the movement of protesters.

Disturbances were also reported in the southeastern city of Multan, although details were sketchy. In the eastern city of Lahore, Bhutto party workers burnt three buses and damaged several other vehicles, police said.

Trouble was reported from the interior of Sindh province, including the Bhutto ancestral home at Larkana, police said.

“The situation is not good in the interior of Sindh. A large number of people have come out on the roads in many cities to protest,” said senior police official Fayyaz Leghari.

STATEMENT
BY PRIME MINISTER HUBERT A. INGRAHAM
ON THE ASSASSINATION OF BENAZIR BHUTTO
27 December 2007

When former President of Pakistan Benazir Bhutto returned to her country a few months ago after a long exile, it was acknowledged that she was exposing herself to great danger because of the volatile political situation in her country.

Nevertheless, her assassination today has left much of the world in a state of shock and grave concern for the future of Pakistan, the region and the world.

Mrs. Bhutto’s death is also a great tragedy for a family that has already suffered much from political violence. It will be recalled that her father, a former President of Pakistan, was overthrown in a coup d’etat and executed.

So on behalf of the Government and people of The Bahamas I should like to express our deepest sympathy to the family of Mrs. Bhutto, especially her two daughters and her husband.

We have been watching anxiously as the people of Pakistan struggle for the return of democracy and the rule of law to their land. Indeed, this was one of the issues that exercised the minds of Commonwealth Heads at our recent conference in Uganda.

Pakistan is strategically positioned in the continuing struggle with religious extremists whose principal weapon is terrorism, and what happens there is bound to have strong repercussions not only in that region but around the world.

It is our hope and prayer that Pakistan will be able quickly to move away from this troubling period and advance towards democracy and the rule of law.