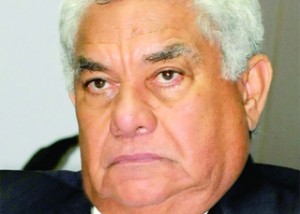 By by Joel Julien joel.julien@trinidadexpress.com

Duprey, the former executive chairman of CL Financial, was paid a monthly income of $5 million by subsidiary CLICO.

In addition his yearly income, Duprey was also paid multi-million-dollar consultancy fees throughout the year, Bisnath, CLICO’s attorney, said. This totalled $90 million a year, he added.

The payments to Duprey were made to his consultancy firm Dalco Capital Management.

The funds paid to Duprey were withdrawn from the “cash cow” of the CL Financial conglomerate, CLICO, Bisnath said.

“Basically CLF billed CLICO on a monthly basis for consultancy services which CLICO then paid to CLF and that was then paid to Dalco $5 million a month, which was Mr Duprey’s pay from CLICO,” Bisnath said.

Bisnath made the statements as he cross-examined Michael Carballo, the former group financial director of CL Financial, during the commission of enquiry into the collapse of CL Financial and the Hindu Credit Union (HCU) at the Winsure Building, Richmond Street, Port of Spain, yesterday. 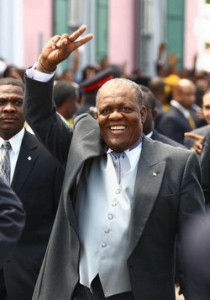 Prime Minister Rt. Hon. Hubert Inrgaham…WHAT A FAILURE!!! He told thousands of BAHAMIANS TO KEEP PAYING THEIR PREMIUMS. Years have passed and not one client of Clico have been paid.

“Is it true to say that from what we have seen CLICO was really used as a cash cow in the group?” Bisnath asked Carballo.

“Yes, because CLICO was really the one that had the cash flowing in it,” Carballo said.

Bisnath described Duprey as a “great investor of other people’s money”.

He said CLICO invested US$445 million of policyholders’ money in a Florida real estate project called Capri, while the investment was worth only US$200 million.

“We know in taking on risks he (Duprey) used policyholders’ money, not his personal money; and when you use OPM, other people’s money, you can have all kind of fancy dreams and you can make all kind of fancy investments because if you lose it, it is not your money you are losing,” Bisnath said.

“He (Duprey) could therefore have a bold and aggressive attitude toward business, and an insatiable risk appetite because it was not his money he was using,” Bisnath said.

Bisnath said Duprey’s downfall was the lack of proper advisers around him.

“He was a great investor of other people’s money, but his downfall was the quality of the advisers around him,” Bisnath said.

Bisnath said Duprey had no regard for policyholders.

“Lawrence Duprey ran this entire group like his personal kingdom, that is what was happening in effect,” Bisnath said. “Basically, it was a one-man show and Mr Duprey did it all,” he said.

Earlier in the proceedings, Terrence Bharath, an attorney for the CLICO Policyholders Group, questioned who was reining in Duprey’s spending after a series of billion-dollar losses in investments on foreign shores.

“It may sound comical, but he was losing billions of dollars in investments around the world and yet still he was accountable to no one?” Bharath asked.

“Presumably his family in terms of the trust would give him certain approvals and latitude to make certain decisions, and I would say a lot of the other shareholders, my observation is, placed a lot of faith in Lawrence (Duprey).

“Some of them saw that he had made good decisions in the past and some of them were just hoping that Lawrence would have the Midas touch,” Carballo said.

The commission of enquiry is scheduled to continue today, with Carballo being cross-examined by Fyard Hosein, the attorney representing the Ministry of Finance.