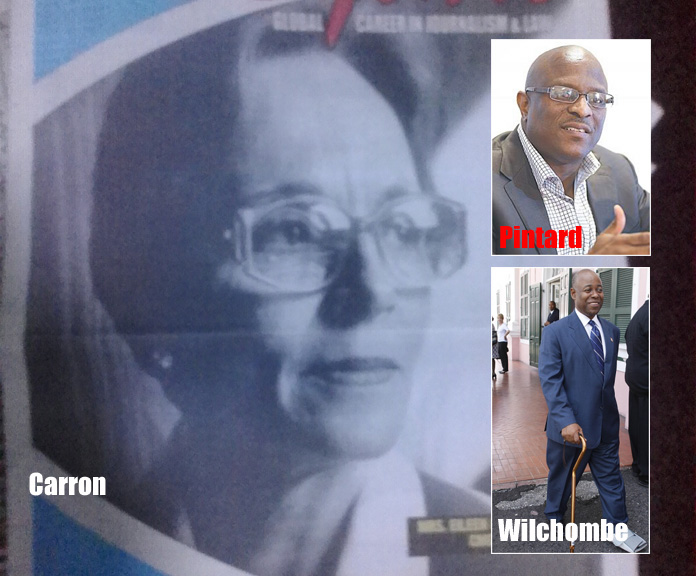 The silence by Ingraham and Minnis must mean that they all support what has unfolded with Pintard!

Nassau, Bahamas – Today we point our pen to some interesting times where the nation is now on sale for thirty pieces of silver by the opposition Free National Movement and its affiliated agencies [Save Da Bays]. It is the beginning of Holy Week and the story unfolding in politics today speaks to traitors in our midst!

This thought comes following the glaring facts presented by the MP for Marathon, Hon. Jerome Fitzgerald, in Parliament this past week. The MP, during his stunning defense of Prime Minister Rt. Hon. Perry Christie and Deputy Prime Minister Philip Brave Davis, exposed suspects [some born in the Bahamas and some still visiting] involved in a detailed plot to usurp the will of the Bahamian people by destabilization.

The key suspect is a Grand Bahama attorney, along with another deep inside the ‘Dutty WUTLESS Terlet’ paper, where it is alleged that they together conspired and concocted a plan with one hedge fund magnate who many think does not like the people of a “darker hue”. This cannot be good for the BAHAMAS!

There is wide agreement that the Dutty WUTLESS Terlet Paper over a week ago had one motive in mind: to destroy, destabilized and damage the Commonwealth of the Bahamas and by extension cause destruction, injury and harm to the reputation of the STATE and the leadership of the duly elected Progressive Liberal Party Government.

There were major developments this weekend, and we at Bahamas Press can assure the Bahamian People that not only has the United States State Department been informed on the matter, but also high-level discussions with Secretary of State John Kerry have already commenced. These are interesting times!

What is worse on the flipside of this affair is the fact that those suspects did not go at it alone. Joined at the hip in this ordeal is the Chairman of the Free National Movement, Michael Pintard. Last week it was confirmed in Parliament by Dr. Hubert Minnis that he was an employee of Save Da [Damn] Bays. This is treasonous! And under him are a Cadre of Traitors who we know don’t give a damn about anything Bahamian!

The revelations, however, have now cast a dark shadow on the FNM Leaders, who many believe have conspired in the whole plot, and right now cannot find the courage to sack or call for the removal of the Party’s National Chairman who is at the front and centre of this most horrid affair! Dey have no shame!

As PAPA would say, “dey are shameless men and women”! But these days not even PAPA is commenting – which must mean – that he’s in agreement with the actions of the Party’s Chairman! UNBELIEVABLE!

If Minnis didn’t know that his chairman was indeed colluding with alleged “Hit Men” while failing to inform the police, by now, over one week now, he should have made a decision on the Party’s National Chairman while assuring the organization that it was not complicit in the bold attempt by some to destabilize the Bahamas!

This kind of paralysis by the FNM Leader is indeed untenable. His slow pace to act is like one in a deep comatose state with no plans to distance the party from this mess! This will not go away!

And what many in the barbershops told this writer over the weekend is: What does this suggest about the leader of the FNM? Does he support criminal behaviour? After all, this is the same leader who, if he is allowed to hold the reigns of power, just might expunge the conviction of John ‘Mr. Bullets’ Bostwick!

But what disgusted us most in all this was how, as champagne bottles began popping at the morning daily as they prostrate and genuflect before the face of Editorial ‘Jungaliss wutlessness’, someone inside the PLP Cabinet joined the line of sympathizers to salute Eileen Carron.

Obadiah Wilchcombe, the PLP who went to jail over a letter so he display his ring-play dance with the boys behind bars, was front and center celebrating with the Tribune! He should hold his head down in SHAME!

Wilchcombe made sure to celebrate the Witch of the East pulling out a full-page ad in the rag sheet, all just to tell her what a splendid job she did lying on the PLP leaders. Yes, taxpayers paid for dat! Da slippery drippy lip JACKASS really has no shame!

Here was a time for all Cabinet Leaders to close ranks and surround the PM and DPM to protect them from the incoming fire. But the SNITCH found ways to support the assault and crank-up the canon on Mr. Christie and Mr. Davis. These are interesting times.

But ya know, when you really look at what this whole scandal includes – criminal behaviour, bribery, collusion, falsifying court documents and entrapment – clearly things will not get better for the suspects within the opposition in the coming days. And we know there is much more still to come.

As Prime Minister Perry Gladstone took on the nastiest attack in all his political life, and while his deputy was being dragged out da bus, to our surprise the defenders deep within the bench of the PLP were few. And one in particular – The Minister of Tourism placed a full page in the Tribune to tell the editor what a wonderful job she had done on the PLP Leadership! SAD.

To every Bahamian it is time to ‘SAVE DA BAHAMAS’!