Prime Minister Hubert Ingraham made two big mistakes in his handling of the initial public offers of two local companies.

When the $62.5 million Commonwealth Brewery IPO came to market in April 2011, he granted his government would make up any shortfall if all the Brewery shares were not sold. He was betting the offer would be fully subscribed. It wasn’t, and National Insurance had to pay $11 million of taxpayer’s money for 1.3 million and sold shares NIB would have a hard time selling if it needed to.

Now we come to the second bit of lunacy, this time involving the $10 million IPO from Arawak Port Development [APD], the company that will be managing the Nassau Container Port at Arawak Cay and the freight terminal at Gladstone Road. Following the IPO, government would own 40% of APD a consortium of 19 private shipping interest will own 40% and the Bahamian public would own 20%.

Mr. Ingraham in all his misguided wisdom has granted a memorandum of understanding [MOU] that the shippers can “adjust” [MANIPULATE] tariffs and fees so they get a 10% internal rate of return every year, come rain or shine. That’s insane. 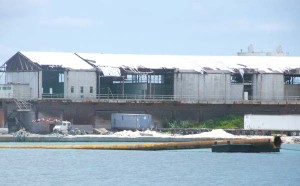 If profits are higher than 10%, the excess goes into the reserve fund. If profits are lower, the shippers can use the next three years to make up the shortfall with whatever money is in the fund. If that isn’t enough, they can raise tariffs.

As I had pointed out last week, this arrangement means the shipping cartel can maintain tariffs at a high level that could go even higher, competition is restricted, and there is no incentive to keep costs down and improve efficiency.

Au contraire, says APD. They will be the model of efficiency, competitiveness and cost effectiveness. Tariffs at Arawak Cay will fall “Middle of the pack” compared to other regions. Yes, APD would have to raise tariffs to cover development costs for the $83 million port, but these will be offset by the 50% cut in freight rates over he last three years. And since 95% of the port’s users are also shareholders, they have a vested interest in keeping tariffs down, thus insuring APD’s operating efficiency.

Truly, APD and CEO Michael Maura Jr. must think Bahamians eat stupid for breakfast, what incentive does APD have to reduce costs and become more efficient when it has government’s permission to raise tariffs anytime it has trouble making its guaranteed 10% return. Under these conditions, how long will APDs tariff structure remain competitive? Furthermore, if the shippers were really so concerned with keeping tariffs down why did they insist on extracting a 10% guaranteed return out of government? That pushes tariffs up! Not down.  The shippers did it because they own 40% of the company that charges the fees, so they can afford to raise tariffs with impunity, pass the higher import cost onto Bahamian businesses and the consuming public, and still make money.

Oh, and let’s say APD had a bad year, earning 7% profit rather than the target 10%. Instead of sucking it up and cutting costs, APD has government’s permission to make up the 3% shortfall over the next three years. At 1% per year, that means APDs new target return rate would be 11% instead of 10% for each of the three years and tariff would have to increase accordingly. What will that do to efficiency, competitiveness and cost effectiveness, pray tell?

And saying that freight rate increases in the coming years will be offset by freight rate decreases from past years is laughable. Offset for whom? Not Bahamian importers feeling the economic pinch, that’s for sure. The only beneficiaries will be shippers who will be making up for past losses.

Here’s something else potential investors need to be wary of. The 10% guarantee is referred to as an “internal” rate of return. That means the shippers are primarily concerned with recouping their investment in the container port and freight terminal. Dividends for Bahamian shareholders will not be coming out of that 10%.

Just look at APD’s dividend payout policy. Dividends will come out “free cash flow” after APD builds up and maintains a cash reserve of $2 million; after meeting all financing and capital commitments; after allowing for any unexpected contingencies; and after taking into account the required minimum 10% internal rate of return.

And since the shippers would be so assiduous about putting aside excess profits into their reserve fund to make sure they get their annual 10% return, how much “free cash flow” do you think will be left over for dividends to public shareholders?

There is also the issue of independent directors on the APD board. There are none. Only government and the shippers are represented, which means no one speaks for the minority 20% interest of Bahamian shareholders.

After a big stink in the press, Michael Maura claimed it was always their intention to include independent directors, and it “could” have been an oversight in the prospectus. Baloney. If that were the case, it would have been written into MOU between government and the shippers right from the start. It wasn’t.

As for Mr. Ingraham his office only caught the “oversight” after the prospectus was written, and blatantly insisted on appointing independent shareholders at the next APD annual general meeting. Wait for it. According to Mr. Maura: “It can be counter productive to have a board member that has no understanding of the business.” UH-HUH.

On a final note, what happened to the much need ballyhooed night-time trucking of cargo from Arawak Cay to Gladstone Road freight terminal? According to the prospectus, the Nassau container port will be “open 8am – 4pm Monday thru Saturday for container and cargo pickup and delivery.” Daylight trucking means slower transportation times and higher costs.