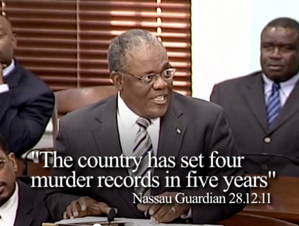 Record Crime Numbers and NO SOLUTIONS!!!
– BLOOD IN DA STREETS

Nassau, Bahamas — With the murder records climbing by the day, it is no wonder Hubert Ingraham and the FNM wish to avoid the message of crime.

The outgoing government has no plan to combat crime. It has no solutions to the vexing problem. It should be voted out of office for its criminal behavious.

We at Bahamas Press have said it time and time again that Hubert Ingraham and the FNM have failed the Bahamian people.

Almost every night here in the Bahamas the lives of some soul is being snuffed out. Some home is being invaded. Some MP wife’s car is being stolen. Some innocent woman is gunned down or hacked to death by some cold killer. Some Rwandan Style Gangster is tripping down a judge outside an ATM. Some group of tourists are being gun-butted and robbed while on vacation and yet Hubert Ingraham says Crime is NOT OUT OF Control in the Bahamas.

Today, we have a government that is criminal itself. Where leaders fail to obey laws that govern us all; fraternizing with the likes of confessed drug dealer ABNER PINDER and awarding such persons with JP licenses.

In the Bahamas criminals are rewarded by the FNM government, and it is no wonder they released so many out on bail to recycle their heinous acts. It is no wonder BIG PUSS SHERRY is their spokesperson and it is no surprise school policing was sacked so criminals could roam the streets and terrorize young people.

The Bahamas is indeed headed in the wrong direction with Hubert Ingraham and the FNM!

We ga say it again: Hubert, you have failed the Bahamian people and this is why WE GA FIRE YOU!