Ingraham says he is OUT and will back Dr. Hubert Minnis!


Nassau, Bahamas – Breaking News coming into Bahamas Press confirms former Prime Minister The Rt. Hon. Hubert Ingraham confirmed in a letter his decision not to run in the upcoming FNM convention this week.

The conclave will be held at the Melia Hotel July 27th – 29th.

BP has projected that Dr. Hubert Minnis and his deputy Peter Turnquest will claim victory by an 82 percent majority of the delegates. It is believed that Mr. Ingraham will back the Minnis/Turnquest ticket!

The Former Prime Minister in a letter to the Convention Chair advised:

“To be clear, should my name be proposed as a nominee to any position at the Convention you should accept this letter as the authority to declare that I have declined the nomination.” [See a full text]

Mr. Ingraham stepped down at leader of the FNM back in 2012 after three consecutive defeats.

Only Bahamas Press wrote how more than a year ago that Mr. Ingraham had no intention to continue in frontline politics after he was granted a deal to do observer missions around the world approved by the Christie Government.

Mr. Ingraham had assured FNMs back in 2012 that at his age he had done all he could to advance the party and country. He shared that he no longer had any interest in frontline politics.

Sources tell us Ingraham is now gathering strength to back Dr. Hubert Minnis and may lead Minnis’ Election Strategy Team to win the general elections and defeat the Christie Regime. 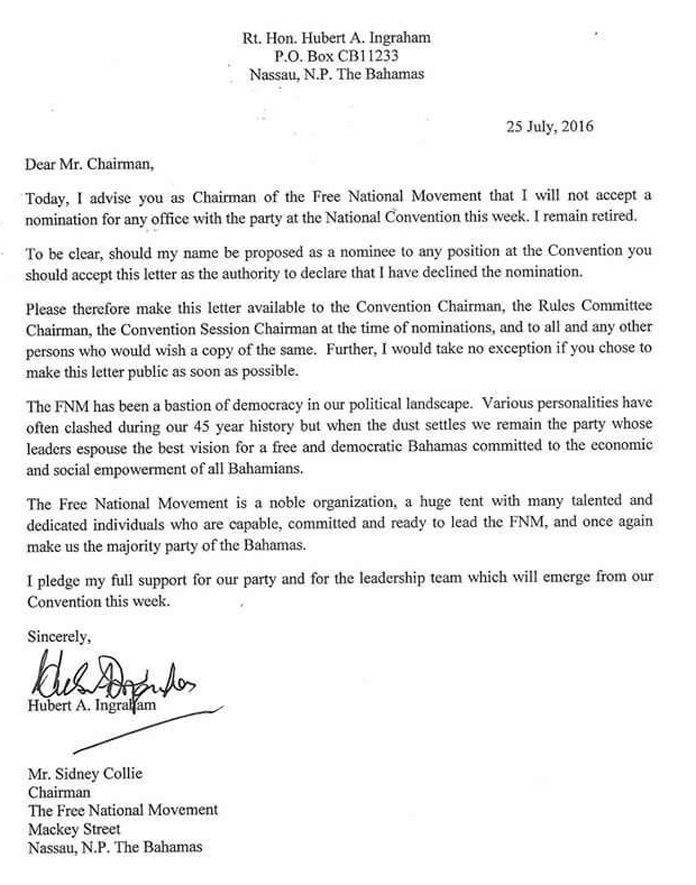