You think we could get on with cases this quick in the Bahamas? Perhaps we could start with that Marco Archer case!!!

BELLEFONTE, Pa. – Juror No. 4, the foreman, gray-haired and middle-aged, stood high in the back row of the jurors’ box, looked down at some sheets of paper, then at Jerry Sandusky and began to deliver a verdict a long, sad time coming.

Of involuntary deviate sexual intercourse. Of indecent assault. Of unlawful contact with minors. Of endangering the welfare of children.

Of terrorizing the poorest and most vulnerable of this area’s youth. Of abusing his fame as a former Penn State defensive coordinator. Of conducting a charade of charitable work to supposedly help children.

Forty-five times it rang out. Juror No. 4 hammered each one home with the independent force each one deserved.

There were just three charges Sandusky escaped on. After each of those not guilty counts, it seemed that the foreman raised his voice as he returned to this parade of guilt verdicts.

This here was a night of redemption, a predator laid bare with nowhere to hide, with no more lies to tell, with no one left to save him.

“Mr. Sandusky,” Judge John Cleland said when this dramatic, nearly eight-minute condemnation was finally, fully read, “you have been found guilty by a jury of your peers.”

Sandusky, clad in slacks and a brown sport coat, stood mostly motionless throughout, looking up at Juror 4 as the truth was slammed down onto him, as the light was finally and irrevocable cast on his behavior. His left hand was placed casually in his pocket while behind him his wife, Dottie, three adopted sons and an adopted daughter either shook their heads at the jury or openly wept.

Moments later Sandusky gave a quick wave to his family as he was led out sheriff’s deputies. Judge Cleland will sentence him formally in about 90 days.

The 68-year-old faces up to 448 years behind bars, or what might as well be forever and ever and ever some more. His defense attorney, Joe Amendola, hinted at an appeal, but it likely would be fruitless.

On the other side of the courtroom, Victim No. 6, who as an 11 year-old in 1998 was abused by Sandusky in a Penn State locker room shower, an act that was investigated but never prosecuted, laid his head on the top of the bench in front of him and sobbed uncontrollably. He was soon hugging family members who had joined him.

“I’m just overwhelmed,” he said, now a grown man, strong and no longer timid in the face of an old pathetic coach.

Soon reporters were racing out of the courthouse, set to break the news of the guilty verdict to a huge throng that had gathered on the steps. Dottie Sandusky was kneeling by then in front of her family, trying to provide comfort when the word of the verdict hit the masses.

The roaring cheers and screams of joy swept right through the courthouse door, up the stairs and into the second-floor courtroom. They startled Dottie, whose head snapped up at the noise and then sunk down as she realized the people of Centre County were celebrating her husband’s demise.

Sandusky will be held at the local jail until he can be evaluated by the state prison system and assigned accordingly. He is expected to wind up in protective custody, away from the general population, for his own protection. That likely means 23 hours a day in a 6- by 8-foot cell. In other words, a concrete box of hell.

“He was prepared to go to jail tonight,” Amendola said. “Mentally prepared. He’s not scared. I think given the circumstances of the case and how the trial was going he knew this was coming.

“This is not a surprise. This is what everyone expected.”

Amendola said Sandusky’s one regret was not being able to “tell his story” from the witness stand. His 33-year-old adoptive son, Matt, determined during the trial that Jerry abused him as a child. He made himself available as a prosecution witness. Matt couldn’t be called, however, unless the state had introduced the incidents on a cross-examination of Jerry Sandusky. It was too much for the defense to risk.

“Even though Jerry, Dottie and the other kids deny Matt’s allegation, it would’ve been explosive,” Amendola said. “There was no way Jerry could testify without Matt being called.”

They walked Sandusky out the back door of the courthouse and to a waiting sheriff’s vehicle, just 50 yards downhill from where they used to hang criminals in the courtyard of the old county jail.

Back then they’d invite as many people as they could fit to ring the gallows and bear witness. Those that couldn’t gain admission would climb the roofs of local houses to watch the execution from high above in this old tightly packed, Victorian downtown.

That was the 1800s, but things haven’t changed so much; just five miles from here, at the Rockville prison, is the state’s execution chamber. And in Bellefonte tradition, a crowd gathered to jeer and scream Friday night behind the courthouse, to let their venom ring around Sandusky’s head for eternity. 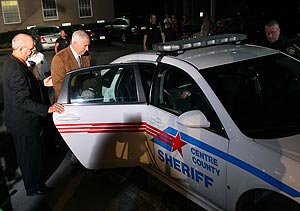 Jerry Sandusky is taken into custody after a jury found him guilty of child molestation. (Getty)

The verdict ended the fallacy that this was an area too devoted to Penn State football to render a fair and proper verdict. The anger at Sandusky was deeper than the outside world could fathom. There may have been a conspiracy to protect Sandusky in the highest levels of Penn State. That will be played out in legal proceedings against university officials, an independent investigation set for release next month and the inevitable slew of civil cases to come that will seek to tap into the school’s $1.8 billion endowment.

None of that represents the rank and file here, not the good people who never hesitated to see Sandusky as a monster and were pained when he seemingly dragged the entire region’s reputation down with him.

For at least 15 years Sandusky quietly stalked this idyllic, Rockwellian community, preying on its most susceptible boys. Using his Second Mile charity to meet at-risk kids, he often fostered relationships with the poor, the fatherless, the troubled or even simply the bored.

In one haunting bit of testimony, Victim No. 4 recounted that he compartmentalized the sexual abuse from Sandusky, and endured teasing from classmates who suspected something inappropriate because he had so few positives in his life. The chance to leave his little town and troubled home for afternoons hanging around the Penn State football program were enough, he testified.

“I thought, ‘I didn’t want to lose this. This is something good happening to me,’ ” he said.

This, time and again, is whom Sandusky chose to target, to trick, to molest, to injure forever. Under the auspicious of mentorship, he stripped them of their innocence and left them in a confused heap in an empty locker room or alone in a dark basement, used and discarded on some creepy waterbed.

During this trial a parade of victims overcame their own fear and embarrassment to detail, often with chilling testimony through sobs and gasped breath what Sandusky did to them. They uncovered a hidden side to this bucolic region, where not everyone is wealthy and educated and as pure as Penn State’s famous white uniforms.

They also cried about regret. Victim No. 4, now 28, said he wished he’d summoned the courage to come forward sooner and save the younger victims. Victim No. 9s mother wept at the memories of sending her son, against his wishes, to stay with Sandusky because he believed he needed a positive male role model.

Former Penn State assistant coach Mike McQueary noted that he didn’t punch out Sandusky when he discovered him in a shower abusing a boy in 2001 and instead let his university bosses handle the case. Which they didn’t. A former Penn State police detective conveyed his frustration at not being able to convince the then-district attorney to charge Sandusky in 1998.

Until finally, deep into a warm Friday night, Juror 4 stood up in that box, representing 11 other citizens that had poured over each and every allegation during 21 hours of deliberation, and read from those papers.

Finally, it was over for Sandusky. Finally, the deception and protection were gone. Finally, this once hulking man, backed by the prestige of Nittany Lion football, propped up by the illusion of charitable work, had nowhere to run, no tale to tell, no one capable of keeping him from facing the awful truth of his life.

Another day of victory for the membership of Southland over Bishop Moses Johnson today!