Nassau, Bahamas – Bahamas Press is right now reporting that a police investigation has opened in the Kemp Road area around 8 am this morning.

While some residents on Whites Road were getting ready to praise the Lord and head out to church, gunmen wreaking havoc, mayhem and violence on the streets of the capital were licking off gunshots in the direction of a male and female in the area.

By the end of the shooting, BP agents on the ground tell us that the male victim was dead – stiff in the road as he was shot seven times about the body before he succumbed to his injuries. The female victim was lucky – again – as she was shot twice in her arm.

From our investigative teams we know this is the second time that same woman has escaped a deadly shooting incident.

Our BP files confirm she is the same victim who was shot in the stomach last year in the area. In that incident a relative of hers was killed. Yinner must pray for her!

Why would someone want to kill this gal?

Boy, I tell ya – when people should wake up to prayers on a blessed Sunday morning, in Kemp Road gunshots rip though the morning silence – LORD HAVE MERCY! 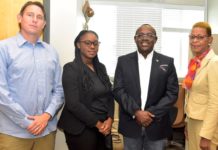