It has been approximately 15 months since I wrote BP concerning my firing from Sandals Hotel. In the wake of the firing of Mr. Butler from City Market I thought I’ll write again just to clear up some misconceptions. You see Sir/madam in April 2009 Sandals fired some 11 persons which included 8 supervisors/managers all of whom were Bahamians. At the time of the firings Sandals placed an announcement on the local airwaves which suggested that all of the persons fired were in some way involved in some nefarious act.

This was followed up by an article in the Tribune entitled “Resort Robbed of 1.5 Million”. Just for the record at no time during my discussions with Sandals did Sandals ever accused me of any wrong doing. Accompanying this letter is an official NIB document Supporting Sandals reasoning for my firing.  Shortly after my firing I appeared on an interview with cable 13 and this was followed up by a letter on this very sight.

What I came to understand later was that many persons upon seeing me on the news outlets apparently developed the impression that I was defending myself from accusations hurled by the Resort. That could not be further from the truth. At the time of my many appearances it was my intention to correct an erroneous report put out by Sandals which I felt was for the expressed purposes to impugn the reputation of long standing decent employees. It was a heartless, wicked and cowardly ploy orchestrated by a band of evil souls carrying out its master’s bidding. I called on them at the time to name the names of the persons whom they alleged to have stolen from them. Today I still await answers. 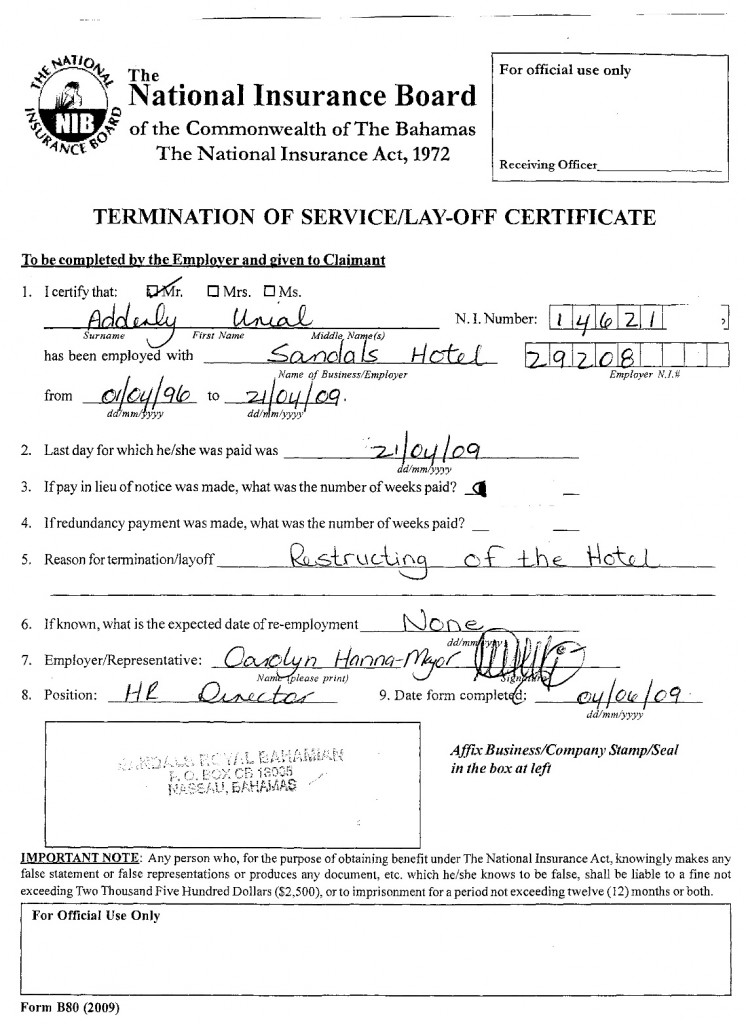 Fifteen months later and I’m still awaiting the outcome of the investigation they claim to have initiated. I never thought for a moment that Sandals was investigating anything, my impression of the whole debacle was that it was designed to deflect attention from the firings.

They were more concern about public opinion rather than rather plain simple truth. Today I am told that there is a certain person in top (Bahamian) Executive management who are fueling the notion that we were all fired for reasons other than what we were fired for. This person has the facts but choose to ignore it. I’m beginning to understand how some us would go to any length to protect their hide even if it means destroying innocent lives.

Sandals had the opportunity to deal with anyone they suspected of wrong doing. I felt that if they had evidence and this evidence was pointing in a certain direction then that information should have been turned over to the police and those persons should have been arrested and charged. That would be the most sensible way to deal with such matters. But in this case Sandals opted to fire everyone and then launched their so call investigation which I think is ludicrous. Even when one reads the article published in the tribune – the article mentioned some type of scheme involving staff members of the hotel working in collusion with staff members from an unnamed bank yet there is no record of anyone being charged. Only in The Bahamas. Only in The Bahamas such reckless assertion can be propagated against so many innocent persons with no recourse.

I will say it here now and I will say it over and repeatedly I have never taken anything from Sandals and I owe them absolutely nothing. I am prepared to go to any length to defend my reputation. Neither sandals nor any of its cohorts have the gall to look me in the eyes and accuse me of any questionable behavior.

Over the 15 plus year I have worked for that resort I had never taken an apple, orange or grape from their property. When I wanted any such things I knew where to find the food stores. This is a very small country and when lies and innuendos are spewed out many persons are quick to jump to judgment irrespective of the truth – I will not stand idle and allow anyone to impugn my reputation.

It’s about time we stand up to these morons – those who feel that they can come here and treat Bahamian however they feel and all we do is sit around and accept it. We need to demand that all and sundry who chooses to conduct themselves in an unacceptable manner that they be ask to leave. This country is bigger than any one man or institution – enough is enough.

Thank you BP for you co-operation in this matter.

EDITORIAL NOTE: Thank you for your letter. We have raised this question before, “WHO IS PROTECTING WHO?” We at BP asked this over and over and we wonder why would the ‘DUTTY’ TRIBUNE would go to such lengths to attack citizens of this country; standing in COLLUSION with financial ‘big-wigs’ who are foreign to this country. All we could hope for Uriel is for the nation to awake from sleep and reject the crafty WICKEDNESS perpetrated by these DOGS!