The Ladies Professional Golf Association’s (LPGA) Pure Silk 2016 tournament in The Bahamas will not only serve as the first stop on the LPGA’s tour but will also help qualify the world’s best female golfers for the 2016 Olympics in Rio, Brazil.

The Pure Silk tournament scheduled from January 25- 31 features 120 of the world’s female golfers.

The contestants will compete at Ocean Club Golf Course on Paradise Island for a purse of $1.3 million.

The Ministry of Tourism, which is the tournament’s main sponsor, has signed on with Global Golf Management Inc. to keep the tournament in The Bahamas until 2018.

This is the fourth year for the event.

President of Global Golf Management Jeff Raedle said the organization is excited to use the tournament as an Olympic qualifier round.

“We have about six months to qualify so the Pure Silk event is going to take precedence among LPGA events,” he said.

“The nation can be represented by four players and then after that the maximum would be two players. It appears that 28 to 30 players would be represented.”

Some of the big names that will be playing at LPGA include Lydia Co, Michelle Wi, Stacy Lewis, who are all in the top 10 best female golf players in the world.

Defending champion Sei Young Kim will also be in attendance.

Rolle, 30, who competed in the 2014 tournament but missed the cut, shot 83-85—168 on December 19-20 at the Ocean Club to defeat Riley in the four-person qualifier conducted by the Bahamas Golf Federation.
Riley, who played in last year’s tournament, will get another chance to earn a berth after earning a spot in the tournament’s Open Qualifier on Monday, January 25.

General Manager of Sports Tourism Virgina Kelly has encouraged all Bahamians to come out and support these players as they compete on the world’s stage.

“We really want Bahamians to come out and participate. The Ministry of Tourism will be doing its part in reaching out to the cruise lines and airlines to see how we can get more persons to be out there on that day. We will have lots of activities to do while they are here,” she said.

“Our partnership has been a great thing for the LPGA. We have four days of live coverage so it is speaking directly to those persons. We are doing more to get more people to come. But the partnership with the LPGA has certainly been a great one for us hence we are looking to stay on for another three years.”

The LPGA tournament will broadcast internationally on the Golf Channel with 10 hours of live coverage.

Based on past tournament figures, final round of tournament draws an average of 413,000 viewers. 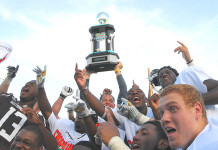