Bahamian film maker, Calvin Harris is pleased to present the trailer for his documentary film called “On the Wings of Men” about the Life & Times of the late Sir Lynden Oscar Pindling.

In this film he interviews many political figures from The Bahamas.

Film Synopsis: “On the Wings of Men” is about the Life & Times of the late Sir Lynden Oscar Pindling; first ever Prime Minister of the Bahamas.

Sir Lynden was born in Nassau, Bahamas in 1930. He was the only child to Viola & Arnold Pindling. His father was a policeman who originated from Jamaica. His parents, wanting the best education for their son, dedicated all of their resources to send him to England for a college education. Sir Lynden didn’t disappoint them, returning home in 1952 with his Law Degree from the University of London,

He became a lawyer, and was later called to the Bahamas Bar in June 1953. Wanting to see a change in the political landscape in the Bahamas, Sir Lynden decided to join an up and coming political group known as the Progressive Liberal Party (PLP), headed by then leader and founder; H.M Taylor. Not satisfied with the direction of the party, Sir Lynden was eventually elected leader of the PLP in 1956.

His ultimate goal, along with the other members of the PLP, was to fight for equal rights for every Bahamian, especially the black majority. They constantly appealed to the British Parliament to revise the Constitution so that all adults regardless of race or wealth would have an equal opportunity to vote towards the political future of the country. Towards this goal, Pindling and the PLP fought an uphill battle against the white British Oligarchy of White Merchants ruling the country at that time. A group known as the Bay Street Boys.

Pindling showed his political talent by bringing the world’s attention to the black man’s plight. With the support from such notable black leaders of the Civil Rights Movement in the United States; Rev. Martin Luther King, Jr., & the Rev. Jesse Jackson, Pindling continued his antics until he wore down the White Oligarchy and eventually lead the PLP to a landslide victory January 10th, 1967.

With the title of Premier (1967-1969), Pindling eventually became Prime Minister (1969 -1992) of the Commonwealth of the Bahamas. He successfully led the country to Independence from England July 10th, 1973.

Pindling’s life wasn’t without controversy. He faced two major hurdles in the 1980’s. First, his decision, along with then Canadian Prime Minister Brian Mulroney, to push the political process forward which lead to the release of prisoner Nelson Mandela, who eventually became President of South Africa. To show his appreciation, Nelson Mandela first flight from prison was to the Bahamas, to personally thank his good friend, a fellow student at the University of London in the 1950’s, Sir Lynden Oscar Pindling.

His second major obstacle was being accused as a drug conspirator by the United States Government. After a year long Royal Commission of Inquiry in 1984, Pindling was cleared of any and all charges. Though his reputation challenged, Pindling still lead the PLP to another election victory in 1987. This would be his last term as reining Prime Minister. He would eventually serve 5 consecutive terms (25 years), the longest only behind Cuba’s Fidel Castro.

In the 1992, Pindling & PLP was defeated by a former protégée of Pindling; The Right Honorable Hubert Ingraham and the Free National Movement (FNM).

Before retiring from politics in 1997, Pindling faced his third Commission of Inquiry. This time regarding the Hotel Corporation. Defended by The Right Honorable Perry Christie, another protégée of Pindling’s, he was again cleared of all charges.

Sir Lynden Oscar Pindling, who many Bahamians referred to as Father of the Nation”.

Calvin Dwight Harris was born on the sunny Caribbean island of New Providence, which is among the seven hundred islands and chains that make up the Bahamas. In 1988, at the age of 18, Calvin left home on a track and field scholarship to attend Murray State University. After transferring to the University of Idaho in 1990, Calvin graduated with an Engineering Degree in 1994 and soon afterward moved to Denver, Colorado. His love for watching movies and a passion to one day make a difference in the film industry is what inspired Calvin to become a film maker.

With an inspired vision, Calvin founded Harris Entertainment in the spring of 2004. The first film released under the Harris Entertainment banner was; “The Great Recession”. This film  explores the history of America’s Economic woes from the Great Depression to the current financial meltdown facing the United States. Many of the country’s best economist are calling this current storm; “The Great Recession”. This film, completed in the spring of 2010, is currently out to several distributors in the United States.

Calvin’s second feature length film; “On the Wings of Men”, is about the Life & Times of the first ever Prime Minister of the Bahamas; Sir Lynden Oscar Pindling and his fight against US foreign policies in the 1980’s. This film is currently in post production with an anticipated release date of December, 2010.

Calvin has also co-written several screenplays including “Cable Cal Center” and “Black Moses”. “Cable Call Center” is about a group of employees who band together to blackmail the Vice President of Cable World into a one year severance package before their jobs are outsourced to a company in India.

“Black Moses” is the narrative script that was developed about the Life of Sir Lynden. Calvin hopes to use the projected success of the feature length documentary film about Sir Lynden’s life; “On the Wings of Men”, as a vehicle to secure funding to eventually bring this film “Black Moses” to the Big Screen. 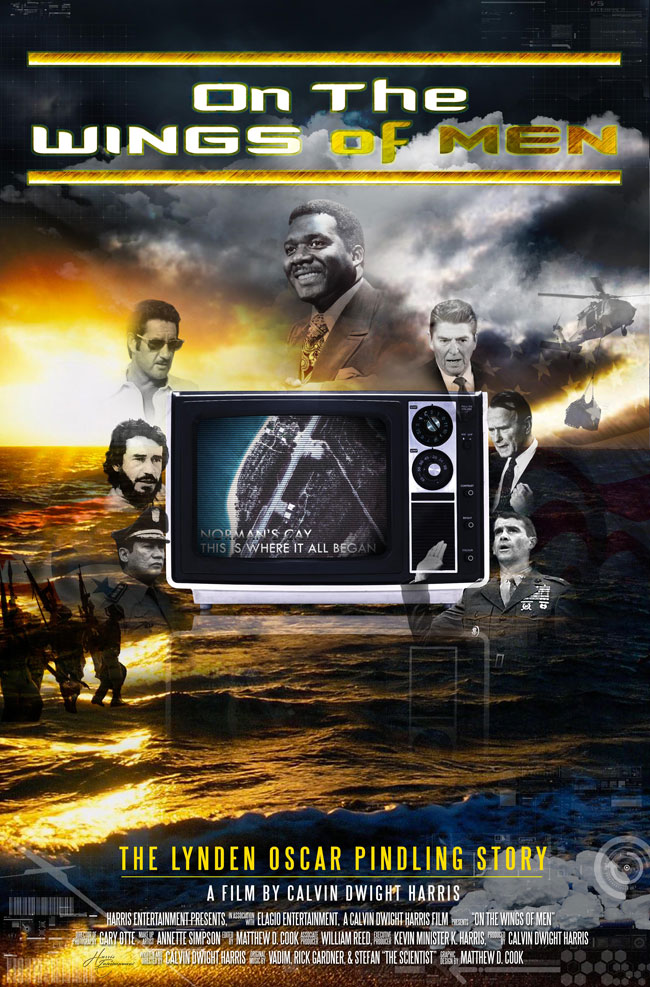