Breaking Report >> BLACK MALE ON THE RUN >> Police tell us they want this fella here who they alleged has was caught in the “COOKIE JAR” of his employer.

Police are seeking the public’s help in locating 35 –year old Valentino Cartwright of Kennedy Subdivision for questioning reference to Stealing by Reason of Service. Cartwright is described to be of a dark brown complexion, slim build and 5’ 9” in height. 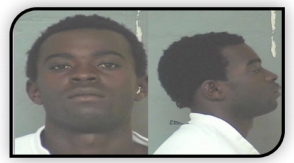 Stubbs is described to be of a dark completion, slim built, 6’ in height, weighing 130 pounds.

CRIME PREVENTION TIP OF THE DAY

REPORT SUSPICIOUS ACTIVITY. EVEN IF THE PERSON DOES NOT APPROACH YOU, IF YOU BELIEVE THEY ARE SUSPICIOUS, REPORT IT TO THE POLICE. YOU MAY PREVENT SOMEONE ELSE FROM BEING ROBBED.