A Retraction Does Not Go Far Enough 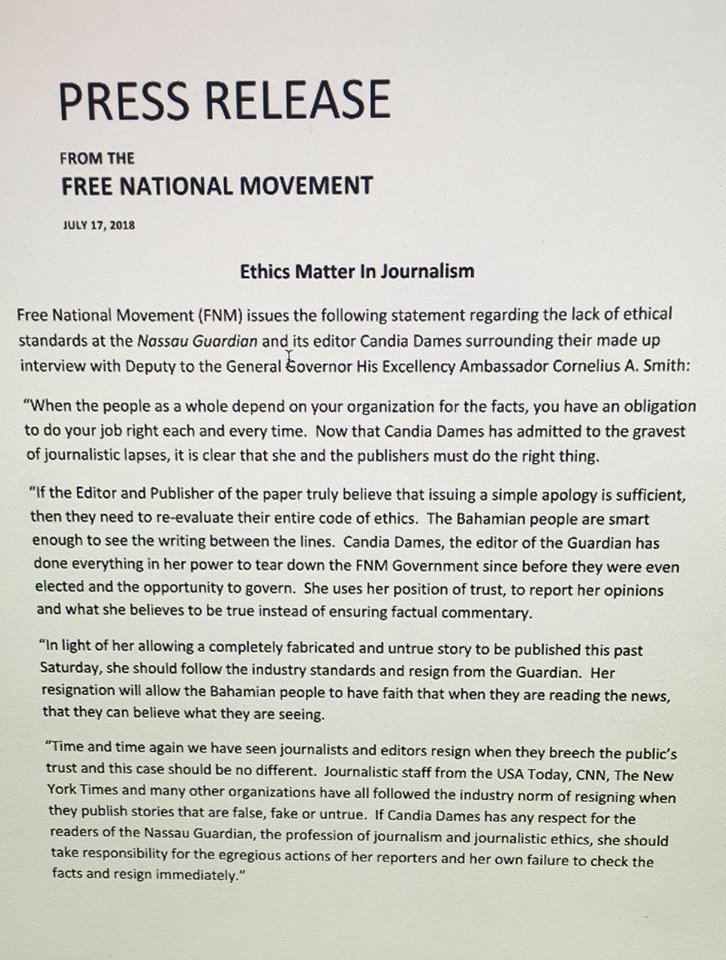 Free National Movement (FNM) issues the following statement regarding the Nassau Guardians retraction about their made up and malicious interview with the Deputy to the General Governor Cornelius A. Smith:

“The purpose and role of journalism in any country but especially in the Bahamas is to record facts and present those facts to the Bahamian people. The Nassau Guardian’s retraction today, stands as a clear signal of a news publication that has failed on their central mission so many times. It is a serious threat to our society, when a media organization completely fabricates an interview with one of our top government officials with the intended result of creating a controversy in the hopes of selling newspapers.

“While the retraction and apology are necessary steps to correct the record that they altered in their original story, no one can argue that the damage was not done with this breach of the public trust. When something that is so sensationally wrong is printed in one publication it inevitably makes it way into other outlets as fact, which in turn reinforces the original misinformation. The Nassau Guardian has an obligation to correct the record.

“And Bahamians themselves deserve a full accounting how the Nassau Guardian failed at so many levels in their duty to simply report the news in a truthful manner. The people need to know when they are reading a newspaper that they are reading factual information not made up misinformation that results in controversy and anger.

“It is clear that the persons in charge at the Nassau Guardian owe it to the people they have maligned and the public to undertake a full and comprehensive investigation into how a reporter and an editor were able to completely fabricate an interview with a top government official and then use their made up interview to push a personal agenda of divisive politics without anyone in their newsroom in authority questioning how, where and when the supposed interview took place.

“This course of action is the only appropriate response to the severe failure the Nassau Guardian has perpetrated on the Bahamian people if they ever hope to repair the breach in trust they have caused. An investigation with a public report will allow them to publicly acknowledge the matter while assuring and showing the public as a whole that they take their responsibility as a news organization seriously and understand the harm they have caused to that mission. It goes without saying that those at the paper that are found wilfully negligent of carrying out their responsibilities in this matter should be publicly held accountable. It is the only way the Bahamian people will have any confidence in the news the Nassau Guardian carries going forward.”