Do we have another Cable/EJ Scandal in the making?

Tomicina ‘Tomii’ Culmer of Grand Bahama has given up the crown – WHY?

Is it because she is pregnant? Is this another Cable/EJ scandal in the making? Inquiring minds want to know!

Or perhaps just a crisis within the organizing committee but breaking news tonight confirms the young drop-dead gorgeous title holder has tendered her resignation and removed herself from the crown.

In a post shared on Facebook to the Nation’s #1 news source Bahamas Press Culmer wrote: “To my wonderful followers I take this time to inform you that due to circumstances and situations I felt it necessary to relinquish my title as Miss Universe Bahamas 2014. I thank you all for your love and support during this life changing journey.”

Culmer wowed the public earlier in the pageant with her International Costume made by Javotte Bethel and also placed in the initial top 3 in the Evening Gown segment. She also won the Top Model Competition for the pageant, but a big row developed after an international designer argued that the coral custom had violated copyrights laws and was similar designed used by another country.

The 1st Runner-up for the crown was Miss Universe New Providence Rokara Hepburn. She more than likely will now take the crown

BP will be following this breaking development! Standby… 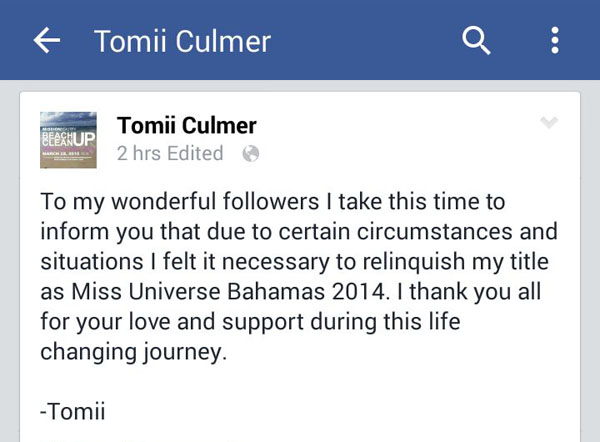