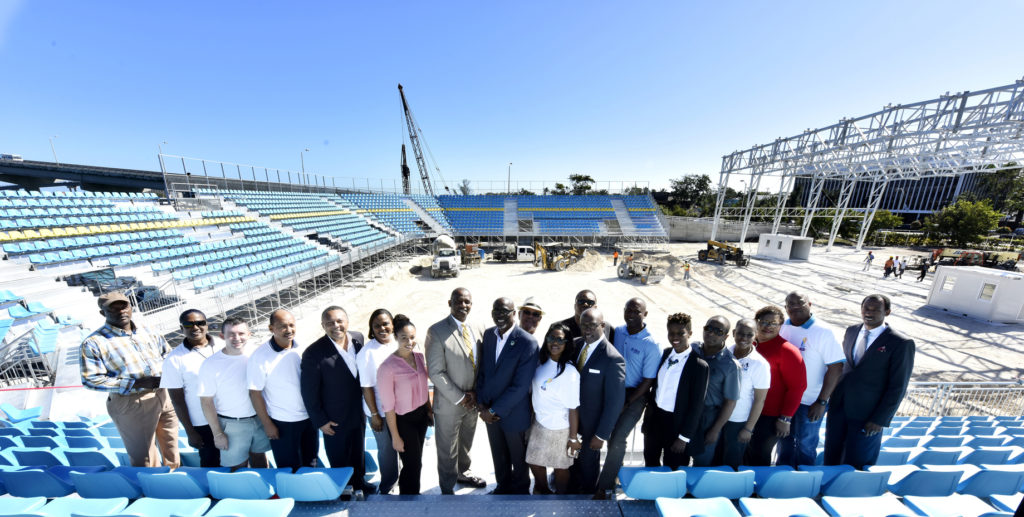 The countdown is officially on!  With just under 100-days to the start of the FIFA Beach Soccer World Cup Bahamas 2017, members of the Local Organizing Committee said the new stadium will be ready to host thousands of local and international spectators.

During a tour of the construction site for the state-of-the-art beach soccer facility to mark the 100-day milestone on Tuesday, Bahamas Football Association President Anton Sealey predicted that The Bahamas would host the most successful edition of the FIFA Beach Soccer World Cup.

The stadium, reminiscent of the Bahamian flag with aquamarine and yellow seats, is being constructed at the foot of the Sir Sidney Poitier Bridge. The Atlantis provides an iconic backdrop to the arena.

“This stadium will sit here as a legacy to the most successful hosting of a FIFA Beach Soccer World Cup competition,” Sealey said.

“This countdown is a significant part of our effort towards this event and today we are very pleased to announce that we are well on our way,” he said.

The stadium is 75 percent complete. Construction on the facility, which will be outfitted with 12 VIP booths, a locker room, medical room, doping room and control room, began earlier this month and is expected to conclude just ahead of the tournament, which will take place from April 27 to May 7. The stadium will be able to house over 3,000 people.

Sealey said the economic impact from the tournament will be tremendous as fans from all over the world will travel to attend the tournament. The country will also benefit from massive exposure in nearly 200 countries across the world.

“This is a made-for-TV event,” Sealey said. “Every single match will be broadcast live on major stations. This will be beamed into 211 member countries of FIFA. The reach of this event is tremendous. We get to penetrate markets that we are not currently reaching. With this event we will be beamed into some of those regions all across the world. That’s the benefit of hosting an event of this magnitude.”

The tournament will feature 16 teams, including The Bahamas. Members of the Bahamas beach soccer squad are competing in a tournament in Argentina this week as part of preparations.

Nigeria, Senegal, Tahiti, Italy, Poland, Portugal and Switzerland have already qualified for the tournament. The other teams will be determined in the coming weeks.

Yarza said unlike other destinations that have hosted the World Cup in the past, The Bahamas has unique advantages as it is already an attractive vacation destination.

Teams are expected to arrive at least two weeks before the start of competition.

The FIFA Beach Soccer World Cup 2015 was held in Portugal. The host country was victorious over Tahiti. The event is held every two years.

Entrance to this year’s tournament is free. Sealey said the free marketing of the destination and exposure that young Bahamian athletes will receive as a result of watching the competition live outweigh any economic benefit. (Photos/Kemuel Stubbs)