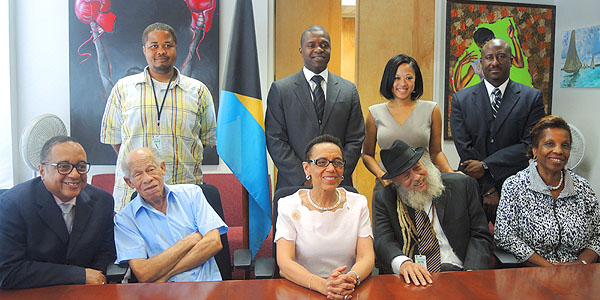 Nassau, Bahamas — Family members and professional colleagues gathered to pay tribute to retiring Jurist Arthur Dion Hanna Jr. for his life’s work of advocating for equal access to legal counsel and by extension justice for the poor, marginalized and culturally disadvantaged.

Mr. Hanna was a member of the Bahamas Bar Association for thirty-seven years and is retiring as the Director of the Legal Aid Clinic at the Eugene Dupuch Law School.

The press conference to announce Mr. Hanna’s retirement was held at the Ministry of Legal Affairs on Monday 20th April 2015.

Pictured and seated from left the Hon. Damian Gomez, State Minister for Legal Affairs; His Excellency Arthur Dion Hanna Sr., former Governor General of the Commonwealth of The Bahamas; Senator Allyson Maynard-Gibson, Attorney General and Minister for Legal Affairs; the honouree, Arthur Dion Hanna Jr., retiring Director of the Legal Aid Clinic at the Eugene Dupuch Law School and Mrs. Cynthia Gibbs, Permanent Secretary in the Ministry of Legal Affairs. Standing from left are Kwame Hanna, son of the honouree; Elsworth Johnson, President of the Bahamas Bar Association; Rawiyah Rahming, daughter of the honouree and Gavin Gaston, Acting Director of Public Prosecutions in the office of the Attorney General. (BIS PHOTO/Elcott Coleby)