My first review was of the FNM’s list of ratified candidates that you graciously posted (https://bahamaspress.com/2012/01/15/observations-on-the-fnms-slate-of-candidates/). As promised, here is my review of the PLP’s slate of candidates.

The break down is as follows:

No PLP incumbents are placed in new constituencies

This is one of the main differences in the strategy of the PLP and FNM. The FNM is essentially playing defense and the PLP isn’t. So it’s highly ironic that the moves made by Mr Ingraham to the boundary cuts, has his party doing most of the adjusting.

With no incumbent candidates being moved around, the PLP has a slight advantage here because their ratification process and ground game exercises wasn’t disrupted much, if at all. It also suggests that the PLP believes their incumbents are in a strong position, voter wise, in their respective constituencies despite the boundary changes. So with this in mind, the party can mainly focus on picking up seats. This is what it means to be on offense.

Firstly, with the exception of Dr Nottage and Andre Rollins, the other 5 candidates on this list, are all returning to the same constituency they lost in 2007. Unlike the FNM’s candidates returning to previous held seats, the 5 PLP candidates have the advantage of momentum on their sides. And when you consider how close 3 of the 5 seats were lost, it’s totally possible that Sea Breeze, Golden Isles, and Blue Hills will return back into the PLP fold.

Considering the political momentum, if you are apart of the opposition party, you really do have a chance to either win a seat or be pretty competitive in your race if you work your area. A few of these first time candidates has a real shot to pick up several seats for their party. The break down is as follows:

1. Bamboo Town, Renward Wells – this race will probably be the most watched race on election night! The incumbent, Branville McCartney, won this seat by 403 votes as an FNM. With Branville running as a DNA candidate and the FNM running its own candidate, Branville will no doubt loose some votes as some of his FNM supporters will vote for their party’s candidate.

If the FNM candidate picks up more than 500 votes, which is very likely, Mr McCartney will loose as the the FNM candidate would have effectively taken enough votes away from Branville, leaving Mr Wells as the last man standing. Its two against one, the odds are not in Branville’s favor.

2. The PLP feels very confident about picking up Carmichael, South Beach, and Marco City. These are 3 of the 5 seats that had its incumbent FNM representative reshuffled to a different constituency.

3. Marathon – The incumbent FNM is retiring and Jerome Fitzgerald has been working this constituency for almost 5 years. I will be shocked if he doesn’t win!

4. Pinewood – I expect this seat to swing back to the PLP

5. North Andros and the Berry Islands – the PLP incumbant is not offering himself, but this seat will probably remain PLP

1. The 3 remaining seats in Grand Bahama – Central GB, East GB and Pine Ridge – will all be competitive. Even though the FNM has lost some support on this island, I do think they will keep 2 of the three. But these races will be hotly contested.

3. North Eleuthera: the incumbent FNM is retiring so there will be two new faces from both major parties vying for this seat. If Clay Sweeting is truly all the buzz in North Eleuthera, things could get very interesting!

4. North Abaco: Yup, you read it right! Mr Ingraham is vulnerable. Yes he won his seat by some 468 votes in 2007, but Mr Ingraham had help. Cay Mills, a disgruntled PLP, ran as an independent and got 276 votes. Those votes would have probably gone to the PLP’s candidate Fritz Bottle, thus giving Mr Ingraham a margin of victory of 192 votes out of 3,524 votes cast.

Why is this important? In 2002, Mr Ingraham won his seat by 395 votes with no third party running. So in 2007, the PLP’s candidate along with the cay Mills, cut that margin of victory almost in half in 2007. Are the people in North Abaco getting tired of Mr Ingraham? Can the PLP’s young candidate, Renardo Curry shock the world?

1. St Anne’s and Long island – these are historically FNM strongholds areas. The PLP can only hope!

2. Killarney – This is Dr Hubert Minnis’ seat. He is probably the most effective cabinet minister and most well thought off MP in the government. If he looses, that will be a bad sign for the FNM.

One of the reasons for Mr Christie’s optimistic view about the general election is the simple fact that he has a number of routes he can take to pick up the 3-4 seats his party needs to regain the government. Frankly speaking, other than Fox Hill, I just don’t see where the FNM is going to unseat any PLP incumbents. If this holds true, come election day, the PLP would already have it’s 16-17 incumbent seats nailed down, needing only 3-4 seats to get the majority, with 21-22 remaining seats up for grabs.

The thing that concerns me about the PLP is, will they allow the feeling of inevitability get to their heads and have a repeat of 2007? Confidence is good, but over confidence can make one take things for granted. If they don’t correct the mistakes of 2007, the lazy and disorganized campaign, the lack luster organization on the ground and a very undisciplined group of candidates, they may well be handing the FNM another victory!

If the PLP gives a repeat performance similar to 2002 in regards to good messaging and party organization from top to bottom, I think there is a good chance they pick up between 7-11 seats and maybe loose 1 incumbent seat, that being Fox Hill.

This global recession has taken out a number of governing political parties. There is a very good chance that the Bahamas will be added to the list. 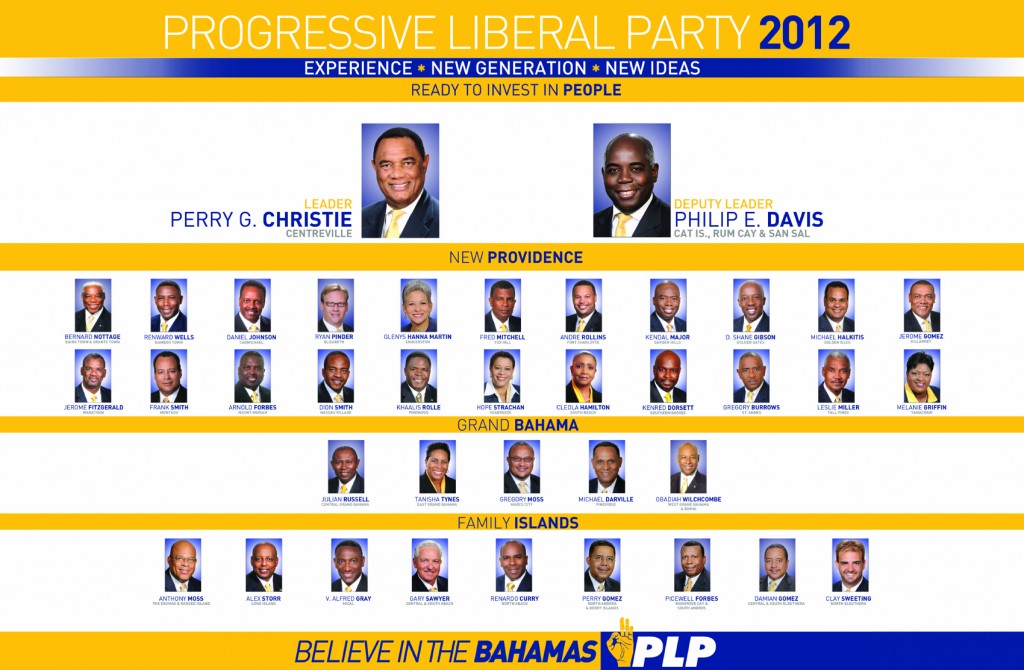