C. B. Moss called those who marched “Shallow People” as his group of two boycotted the event. Boy, I tell ya – The Bahamas must be the laughing stock of the world!

Nassau Bahamas — MARCH A MAJOR DISAPPOINTMENT FOR ORGANIZERS!!!! Branville McCartney and Duane Sands >> Check out this picture in downtown Rawson Square published on the front page of the Nassau Guardian.

The headline in the 160-year plus old paper read: “More than 200 march in support of death penalty.”

Now if you smart like BP and does think “CRITICALLY” like us, you would know this photo is taken down in Rawson Square.

You would know Rawson Square is a BIG BIG BIG public space. You would think a major newspaper like The Nassau Guardian, which has camera men and women, would be able to show me and yinner with a big FISHEYE camera that mass crowd of 200 plus people that wrote about, hey? But sadly they could not. 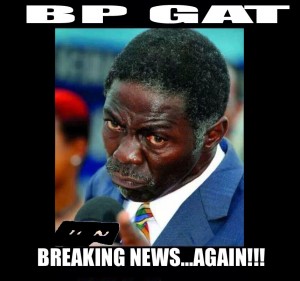 No such crowd ever showed up. And if they had, we would have seen the pictures by now! Now you see why less than 5,000 people are reading the morning papers and more than 65,000 reading BP a day. GO FIGURE!

Mind you, maybe the Guardian was looking through its supernatural reporting eye and was counting the souls of the 200 murdered in the last two years who may have appeared in the spirit…

Alice Town, Bimini — Bahamas Press has more breaking updates out of the tiny island of Bimini where we can now report the victim of that brutal gang rape over the weekend by a group of New Providence boys was indeed drugged before the incident happened, according to investigators.

The men could be formally charged in court today. Bimini residents want all “SEAWEEDS” off the island by Sundown… Boy, this ga be something….

We hope yinner who watched and read the WUTLESS MEDIA today noticed how a near silence was given to that gang rape incident on Bimini. 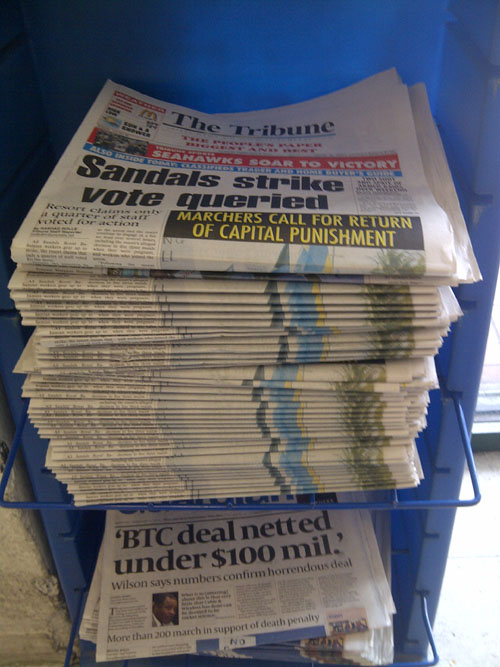 No mention of the property involved or the arraignment of the suspects. TWO OF THE EIGHT HELD ARE ON BAIL FOR OTHER SERIOUS CRIMES… ONLY IN THE BAHAMAS!!!

Look how the newspapers are dying on the shelves…

NEWSPAPERS ARE ROTTING ON THE SHELVES >> The death of the morning dailies have begun in the Bahamas. It was Monday Morning and there was nothing in the newspapers.

This is a photo taken of the Tribune newspapers stacked up on the shelves at 3:30 pm this afternoon. BP was inside the store to inspect prices at this Supervalue Location on the top of the Hill on Mackey Street.

Two newspapers were sold for the entire morning according to a store source. BP does read news on TABLETS AND SMART PHONES… BP now has 35,000 plus social media followers. WE AT BP HAVE TAKEN OVER!!!!

More traffic lights go down in the capital

PEOPLE JUST BREAKING DOWN THE BAHAMAS!! >> Another Traffic Light on the ground before the people of the Bahamas could pay for the massive road works costs racked up by the former Ingraham Regime.

Now let’s watch and see how long it will take before the people hired will put back up a new traffic light and bring order back to this section of Wulff Road.