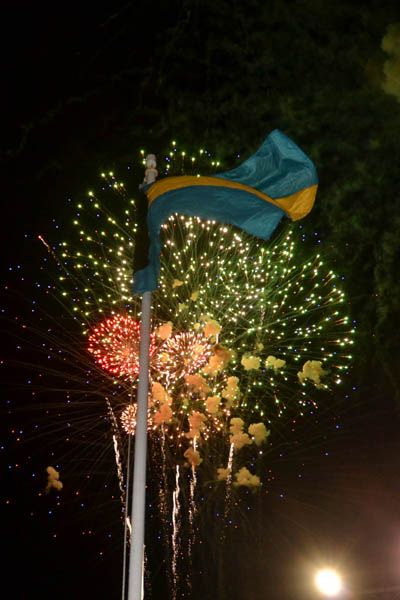 ARGUABLY, the four most notable dates in Bahamian history are Emancipation Day (August 1, 1834, which after a period of apprenticeship translated into physical—perhaps not mental—freedom from the chains and bonds of slavers); January 23, 1956 when the historic anti-racial discrimination resolution was moved; Majority Rule (January 10, 1967) and Independence (July 10, 1973).

Indeed, even while we celebrate our Independence, some would argue that the biggest date in our history since emancipation is January 10, 1967, which is referred to as the second emancipation (politically empowering).

That said, as we celebrate our country’s 40th anniversary of Independence, one sees this as an opportunity to renew our national outlook, to begin a transformative period of economic and social development where all Bahamians are intricately involved.

As a 28-year-old, I am a part of that generation that was “born free”, that generation of Bahamians who were told so many of the great stories of the struggle for majority rule, equality and the pursuit of independence.

Frankly, we must reinforce our nation’s sovereignty as there appears to be an overdependence on outsiders (foreign investors).

Even as we celebrate our 40th anniversary, the Bahamas remains a de jure (by law) independent state, that is, one that is officially recognised as independent but is over dependent (and not in an inter-dependent way either). We can hardly claim to be the deciders of our own destiny (particularly economically). There is an inadequate level of direct participation in our economy — beyond merely providing labour — and resulting in the unfortunate realisation of one of Sir Randol Fawkes’ greatest fears — that is, the barefoot economy, where many Bahamians are contented with serving as maids, waiters and servants as opposed to becoming owners and entrepreneurs, particularly in the tourism plant.

To use the words of Dr Eric Williams (former Prime Minister of Trinidad and Tobago), one would posit that since the 1950s, we have developed and relied on a two-pronged, plantation economy.

Say what you may about Venezuela’s late former President Hugo Chavez, but he clearly understood the concept of economic independence. We remain extremely vulnerable to varied external shocks and economic downturns.

Yes, I’m going to wear my independence t-shirt, watch/attend the celebratory events and even salute. Indeed, I love the pomp and pageantry and that feeling of oneness.

However, the stark reality is that colonialism is still present, but in a different form.

After 40 years of self-rule, the naked truth is that we have yet to become self-sufficient, that we must learn to produce what we need as we illogically import 90 per cent of what we eat. Budget after budget, successive governments have failed to take a cue from countries such as New Zealand and impose greater import controls so that local manufacturers, farmers and fishermen could benefit, so that they could foster the expansion of the minute production base of our economy. There has been a failure to accomplish real diversification of our economy or to embrace, in a practical way, real change.

The empowerment of Bahamians of colour has been an elusive dream, since so much of the majority remains economically deprived and intellectually stymied. Notably, there have also been quite a number of riveting success stories; however, the average Bahamian continues to eke out a living.

Some of our most glaring failures have been our failure to create a more civil society, our failure to eliminate the cash economy, the fact that corruption is rampant at all levels of government and the stymying of our economic development due to the lack of a credit bureau.

According to heart surgeon Dr Duane Sands: “These days, schooling takes place, as opposed to education. Whilst there have been a transformation of the appearance of the colour divide, there has only truly been an exchange of racial discrimination for economic discrimination.

“I do not feel independence. We are too inextricably tied to the rest of the world. Even though we probably could, we do not and cannot presently feed ourselves and are dependent on the whims and fancies of other countries. We don’t harvest the products of the sea or soil to an adequate extent; there is a deficiency relative to skill sets needed to run our country; and technical expertise is lacking in many areas, for example, health care, engineering, information technology and finance.”

It is difficult to draw a particular timeline relative to the beginning of the social ills afflicting the Bahamas.

To use 1973 — in terms of our overall history — is arbitrary, since many of the social ills we face today was evident prior to 1973, eg the preponderance of single parent households and absentee parents (especially fathers).

The difference today is that many of our societal ills have ballooned a hundred-fold. In the Family Islands, it hardly mattered if a child was born out of wedlock or to a single parent household, since the communities took care of and collectively raised the child.

In New Providence, the family structure has grossly deteriorated as children are having children and some grandparents no longer provide that support system as in times past.

It is for these reasons why some youngsters become fodder for the gangs! Nassauvians, like New Yorkers, have become too citified.

When the drug culture of the 1970s and 1980s descended upon us, the cracks in our society showed. Suddenly, drug dealers were treated as good citizens and there was no shame in being criminal.

The drug culture changed the Bahamas forever, wreaking havoc on our values and serving as a disgraceful horror story of social degradation, where corruption and a tip-tip code has become the norm from top to bottom, even in the country’s Cabinet.

When youngsters had access to thousands of dollars and could wreck a car and easily purchase another, it became clear that they had lost their value for work. So some would ask, how then could the government expect them to work on a farm or fishing boat, right?

During the height of the drug trade, when churches catered to drug dealers for money in their coffers, new instruments and new church carpets, we certainly knew that our society was on a downward spiral. This was, and did breed, an era of laziness.

Indeed, we have become a very permissive society, inundated by negative cultural influences via the internet and American television. Sadly, Bahamians have taken to imitating the low end of foreign cultures. For example, I cannot fathom why young men would mimic the walking around with their pants sagging or tucked in their socks. What’s more, I’ve seen older men doing the same and looking just as idiotic!

On Sunday night, I spoke to one of our nation’s heroes, a man who has been a father-like adviser and mentor to me — Governor General Sir Arthur Foulkes.

Sir Arthur and I spoke about the progress and challenges our nation has made and faced over the last 40 years and even prior to Independence.

The Governor General said: “The main thing, as an independent country, is that we have maintained our Parliamentary democracy. That is to our great credit as a lot of former colonies — particularly those in Africa — have had the opposite. We have had four changes of government since 1973 and all went smoothly, without bloodshed! We have managed it very well, smoothly transitioning from one administration to another.

“We have made other strides as well, such as advances in education, although a lot of improvements could still be made. When I went to Western Senior (now CR Walker), the majority of black Bahamians had to leave school at 14; there was only limited access to Government High School and QC (Queen’s College) was segregated. Education has since been expanded and we now have thousands of Bahamians with tertiary degrees — literally thousands! Even some failing schools turn out top-notch students. I firmly believe that it’s all about parental interest. In the last few years, we have had five Rhode scholars from the Bahamas,” Sir Arthur said.

“One of noted aspects of our culture — besides music and so forth — has been our manners. Indeed, we have done a wonderful job in the last ten years of rediscovering Bahamian music since there was a lull there, when local artists were imitating American and Jamaican artists.

“Likewise, let’s rediscover traditional Bahamian manners, respect and gentility and, of course, our civility. People do not only come here for sun, sand and sea, but also for our civility.

“Instead of imitating the culture in the US, calling parents and teachers by their first name…(he pauses, laughs in disappointment and exclaims “incredible!”)…we must recover our good manners,” the Head of State lamented.

Indeed, we have had some noted achievements since Independence. The National Insurance Board has been a crucial social security safety net and perhaps the greatest institution to be established by the early Pindling administration; the Royal Bahamas Defence Force is another noble institution, which was a natural development post-independence as we had to police our own waters; and, of course, the conversion of Exchange Control to the Central Bank has been critical to our development as and, moreover, is a body that is respected nationally and internationally.

The opening of the airwaves, widespread infrastructural development, a positive rebranding and resurrection of the Bahamas from a “nation for sale”, the construction of more educational institutions throughout the archipelago, and so on.

“Yes, we have problems with crime and other societal ills, but I think the future is bright for us. I see a lot of bright young people throughout the Bahamas and they will do our country great credit in the years ahead,” Sir Arthur said. I couldn’t agree more.

We must be weary of the destructiveness of political tribalism and divisive partisanship. Politics is crippling the independence and individualism of so many of our people.

Over the next 40 years, we must rediscover the essence of being Bahamian. Sadly, today we equate success with money, gold bangles, fancy cars and material possessions.

As a people, we must awaken our cultural consciousness and embrace a bright new future, with all hands on deck.

As we look towards another 40 years, I bask in the shadows of our foregone national heroes and all those unrecognised persons who contributed so much to our development as a country and, by extension, my development as a person. I truly believe that the potential of our independence has yet to be fully realized/explored and, as we celebrate our 40th Independence anniversary, let us all move forward, upward, onward and together into a bright new dawn and a glorious future.