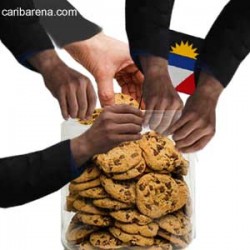 The Bay Street Boy hands seem to be the biggest! We bet ya his cookie spells NRIP

Nassau, Bahamas — BP hereby formerly ask Brent Symonette to give back all of the monies he has made on the backs of the Bahamian people while occupying the office of Deputy Prime Minister.

The Bahamian people elected Brent to be the guardian and custodian of their affairs and in return, he enriched himself the more.

In addition we call on PAPA to come clean and declare his genealogy ties to the owner of FES construction company, so the Bahamian people can see the NEPOTISM  that exist!

Papa gave millions in contracts to his cousin [FES CONSTRUCTION], while other Bahamian contractors businesses went under ground due to lack of work.

Fletcher Mcintosh and Hubert Ingraham are related. He was flooded with Multi Million Dollar Government contracts some with selective tender and some with NO TENDER BID WHATSOEVER.

Likewise we call on AIRWOLF (HELICOPTER DEVEAUX) to come clean on all giveaways .

Similarly we call on Lying Mona Vie Laing to repay all exemptions he sanctioned for his potent drink operated by his sister-in-law and brother!

Finally we call on Neko ‘Drunk again” Grant to repay monies back to the treasury in a contract he gave to a non functioning businessman. BP ga say more on this soon.

CORRUPTION PACKING UP ON DEM!!!