<<< Hubert Ingraham Leader of the FNM and Prime Minister of the Bahamas.

Nassau, Bahamas — Hubert ‘Papa Doc’ Ingraham taunts himself as the worker, the doer the one who can get things done. The man who fires in a New York minute and says what he means and means what he says. But is this true?

Ingraham was at the FNM Convention demonizing Perry Christie as a ‘do nuttin talker’. Standing like a fighting monk between two torches of fire, Ingraham went on to suggest that he’s a worker, one who acts and is a man who ‘Gets things done’. Ingraham must know he’s no Philip ‘Brave’ Davis.

While we believe the Prime Minister had an aggressive record of getting things done between 1992 to 2000, today’s Ingraham is not the Ingraham of 1992. He’s a modern day political charlatan here’s how we prove it.

Ingraham campaigned in 2007 on how Christie couldn’t build the Straw Market. He said Christie passed the market everyday and his heart was hardened. Vendors voted FNM, but two and a half years later, the hole left in the ground at the market site is still there. Work on the market left by Christie is still unfinished, Cancelled and Stopped by “Papa Doc”. Ingraham today is NOT the Ingraham of 1992.

Ingraham like Christie came with the announcements of Bah Mar Development. Christie made two launches of the project, Ingraham one. Ingraham criticized Christie for not getting that off the ground and complained of giving away the road, the prime minister’s office and other surrounding buildings. Ingraham came to power and still gave Bah Mar what Christie promised. Two and half years later, construction has yet to begin and workers since have all been sent home. Ingraham today is NOT the Ingraham of 1992. 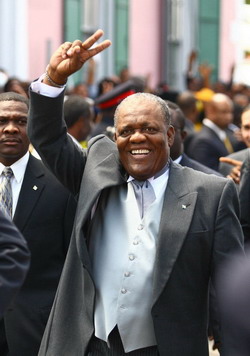 Then you would remember Ingraham pleading call to the nurses when he begged them to ‘GO BACK TO WORK’. Readers would remember Ingraham told nurses in Parliament on June 15th, “…But if you want result listen to what I say; kindly go back to work and I will cause…and resolve the matter on Monday, NOT A BIG ISSUE! Not a Big issue to resolve.” The nurses returned to work that same Monday as Ingraham agreed, but his word meant nothing! Ingraham like he accused Christie was the ‘talker’ again. Nothing happened. Ingraham today is NOT the Ingraham of 1992.

Then readers would remember Ingraham’s promise to FNM Country to appoint a minister with responsibility for Grand Bahama Affairs following the 2007 general elections. Ingraham said on Independence Park at the Thank You rally held on Wednesday 9th, 2007 the following, “When next there is a need for me to adjust my Cabinet line-up, I shall, God willing, create a Ministry of Grand Bahama Affairs.” That same Cabinet is about to change for a second time but as for Ingraham’s words? Smoke and Mirrors. Ingraham today is NOT the Ingraham of 1992.

Then there was the promise to thousands of homeowners struggling to pay mortgages. Ingraham on Sunday 12th, 2008, communicated from Washington via his press hubby said this: Prime Minister identified that due to unemployment, underemployment or other unforeseen circumstance, the relief plan will assist persons who are unable to remain current with their mortgage payments.

“For persons who would have lost their jobs, persons in the hotel sector who would be on short work weeks, and persons who for some other unforeseen circumstance are now unable to keep current in their mortgage payment, but who ordinarily sought to make their mortgage payments for their homes, we would like to ensure that these persons don’t end up losing their homes because of what we consider to be this temporary setback – even though we do not know how long this temporary situation is likely to exist.”

Mr. Ingraham said he expected this new dimension of social assistance to be implemented as early as the beginning of November. And guess what? The assistance has yet to come. Here’s another promise to the Bahamian people not happening. SMOKE AND MIRROR he calls it. Ingraham today is NOT the Ingraham of 1992.

Then it was Ingraham’s promise to the people on May 2nd, 2007, “I will victimize no one.” Boy the numbers are too many to mention. Victimizing began with the Police, then Customs officers, then Immigration officers and continued throughout civil service. Contractors were victimized and anchor project developers and to leave town. No sector was spared. Ingraham’s victimizing tactics took on a new policy; STOP, CANCEL and REVIEW, a policy his own minister termed now annunciated by the PLP.

The man who deems himself a “DOER” should look again and see how he fails to say what he mean and mean what he says. We’ve discovered he’s all bull with NO BITE! Grand Bahama still has yet to receive there hospital promised by Ingraham since 1991 some 18 years ago. His government lacks accountability and his words of promised transparency is looking for democracy following the botched November Convention of the FNM.

We submit the Ingraham of 2009 is worse than Christie could ever be. His many lies to the Bahamian people are recorded and these are some to prove our point.

Ingraham today is NOT the Ingraham of 1992.