HERE YOUR HISTORY THE PRIME MINISTER MINNIS, AND THE WUTLESS MEDIA OF THE BAHAMAS DOES NOT WANT ANY OF YOU TO KNOW…READ!


In September 1958, journalist and freelance writer, Peter Knaur, and his new employers, ensured that newspapers across America carried the story of his new appointment as Associate Editor of the Nassau Guardian.

Knaur had been handpicked by the leaders of the UBP, and installed as leading newspaper, the Nassau Guardian’s, Associate Editor. His job was to help the UBP accomplish the singular goal of an indefinite continuance in the Bay Street controlled social and government system in the Bahamas. This was to be achieved through implementing five important objectives.

Knaur’s job was first, and foremost, chief propagandist for the UBP Party under the guise of associate editor at the Nassau Guardian.

Second, he was to prepare a comprehensive plan to maintain white control of the Bahamas government.

Third, he was to infiltrate the highest echelons of the Progressive Liberal Party, to learn its inner workings. Knaur was to find any dirt which could be exploited on those high up in the PLP.

Fourth, through articles and columns in the Guardian, he was to do away with the idea of ‘Uncle Toms’ as being a negative thing among the negro population.

Fifth and most importantly, the Knaur-Guardian relationship was to be used to halt any advances in universal adult suffrage. Any push by blacks in the Bahamas to expand voting rights was to be stopped at all cost.

What is a startling revelation about Peter Knaur is that just before he took the job in Nassau in 1958, he worked as special consultant with the Free Europe Committee.

The Free Europe Committee was a propaganda anti-Communist, front organisation for the Central Intelligence Agency, the CIA.

“The National Committee for a Free Europe, later known as Free Europe Committee, was an anti-communist Central Intelligence Agency (CIA) front organization, founded on June 1, 1949, in New York City which worked for the spreading of American influence in Europe and to oppose the Soviet one.”

FREE EUROPE COMMITTEE 1949
“FEC was established in June 1949, in New York by the group of prominent American businessman, lawyers, and philanthropists (including Allen Dulles who became Director of the CIA in 1953), under the name ‘National Committee for Free Europe’ (NCFE). George Kennan of the Department of State is considered as the spiritual creator of NCFE. He pressed the National Security Council to reorganize covert action planning and management that led to the creation of the Office of Policy Coordination (OPC) with Frank G. Wisner as its chief in September 1948. Kennan proposed that OPC work through the “American Freedom Committee” to develop their operations abroad. The idea was to finance selected émigrés in their activities in the United States demonstrating a contrast to those in the newly installed, Soviet styled regimes in Eastern Europe.”

PETER R. KNAUR IS NAMED EDITOR IN NASSAU
Peter R. Knaur, son of Mr. and Mrs. Karl Knaur of 11 Borough Lane, left yesterday to begin his new position as associate editor of the Nassau Guardian at Nassau, the Bahamas, B.W.I.

According to Mr. Knaur, the Nassau Guardian is a Conservative party newspaper, and as its associate editor, he will be working closely with the policy of the party which is called the United Bahamian Party.

He returned to Newton in December, 1957, after spending nearly six years in Europe with Radio Free Europe. During that time he was news correspondent in Stockholm covering all Scandinavia, and for three years was chief of the Western Austria News bureau.

Since his return home he has done freelance writing and was a special consultant with the Free Europe Committee in their New York office. He plans to return to Newtown at frequent intervals.

OCTOBER 1959
By October 1959, Peter Knaur was exposed and his true role in coming to The Bahamas was uncovered.

Peter Knaur’s Master Plan falls into the hands of the PLP. 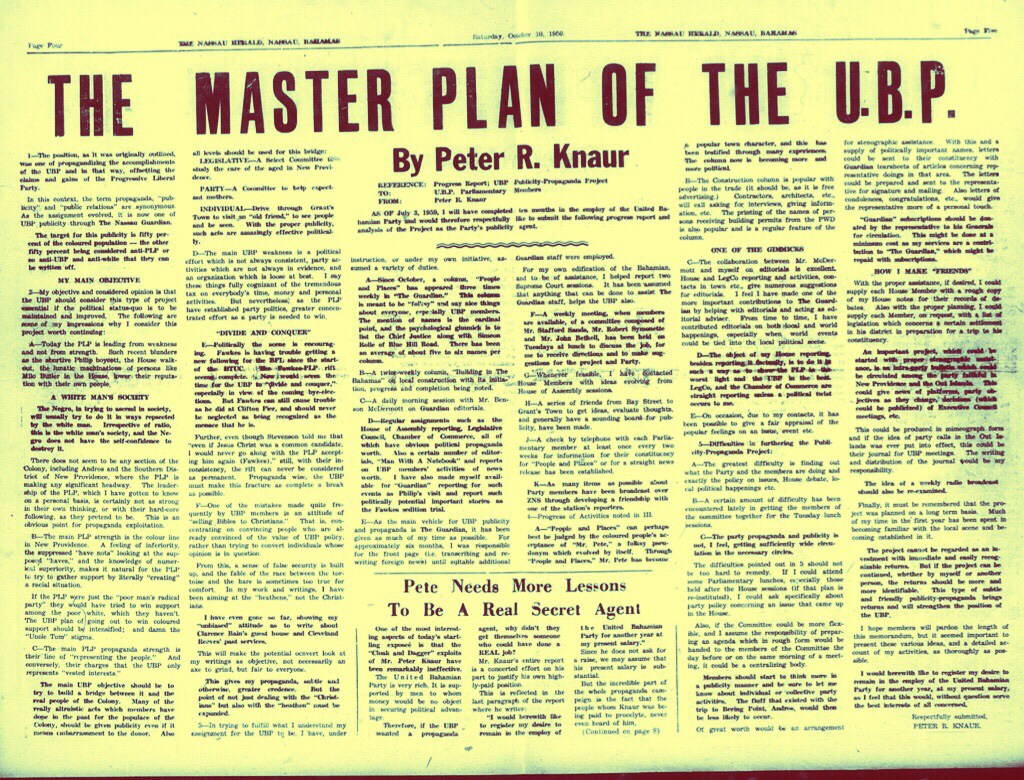 THE MASTER PLAN OF THE U.B.P.
By Peter R. Knaur

TO: U. B. P Parliamentary Members

AS OF July 3, 1959, I will have completed 10 months in the employee of the United Bahamian party and would therefore respectfully like to submit the following progress report and analysis of the project as the parties publicity agent. 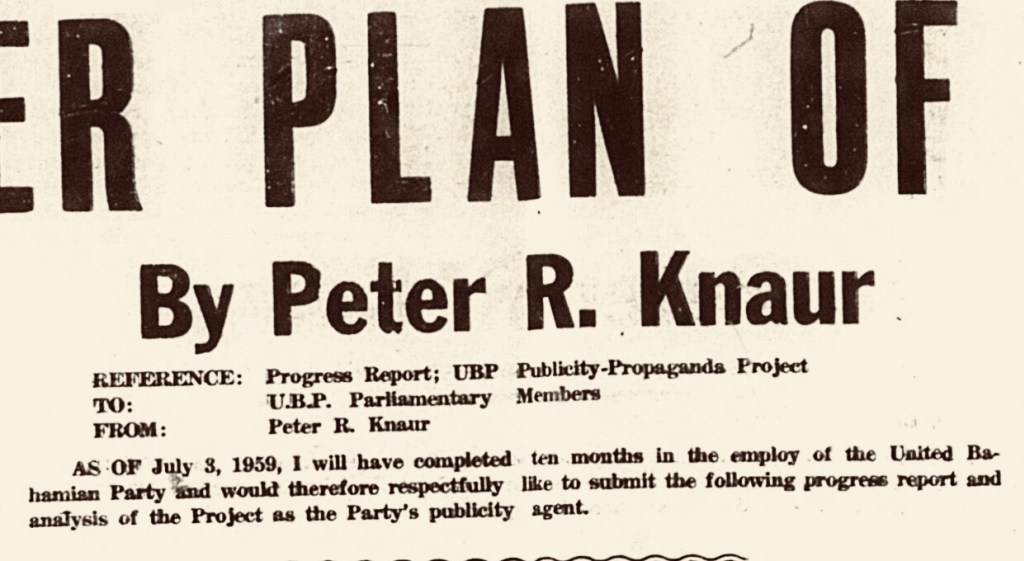 In this context, the term propaganda, “publicity” and “public relations” are synonymous. As the assignment evolved, it is now one of the UBP publicity through The Nassau Guardian.

The target for this publicity is fifty percent of the coloured population – the other fifty percent being considered anti-PLP, or so anti UBP and anti-white that they can be written off. 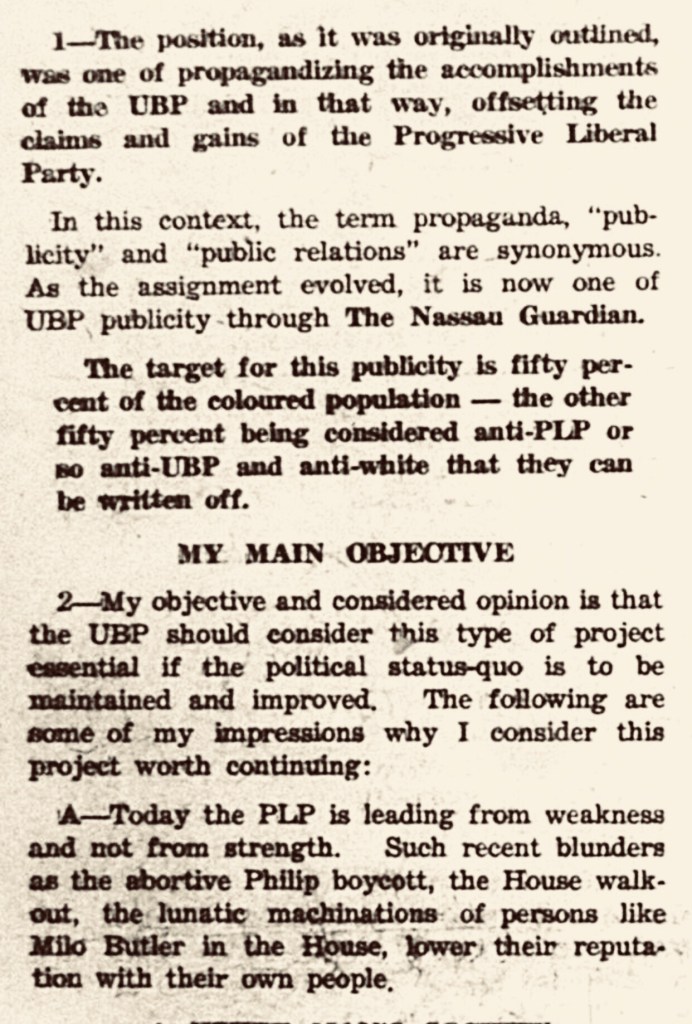 A WHITE MAN’S SOCIETY
The Negro, in trying to ascend in society, will usually try will usually try to do it in ways respected by the white man. Irrespective of ratio, this is a white man’s society, and the Negro does not have the self-confidence to destroy it. 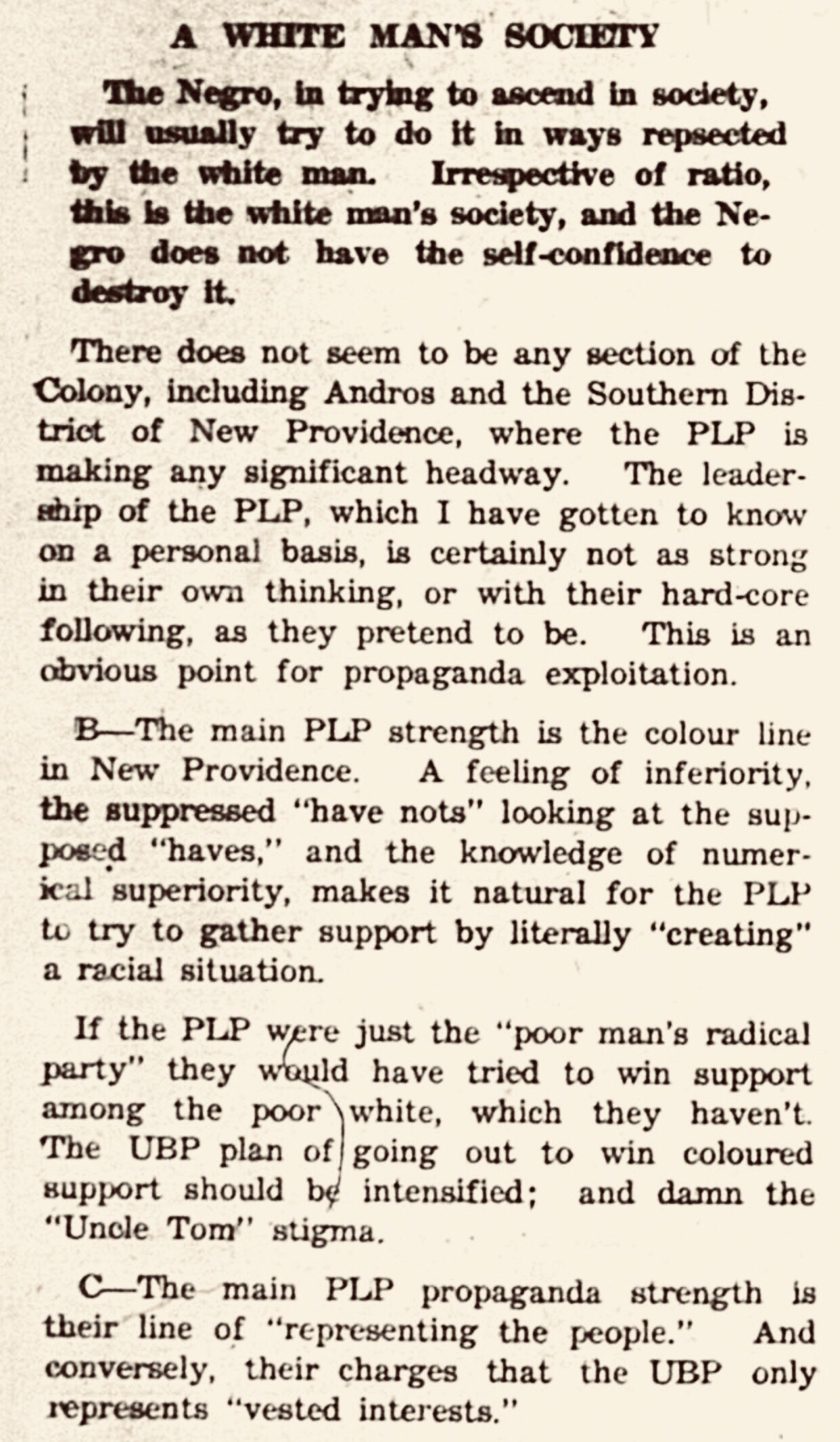 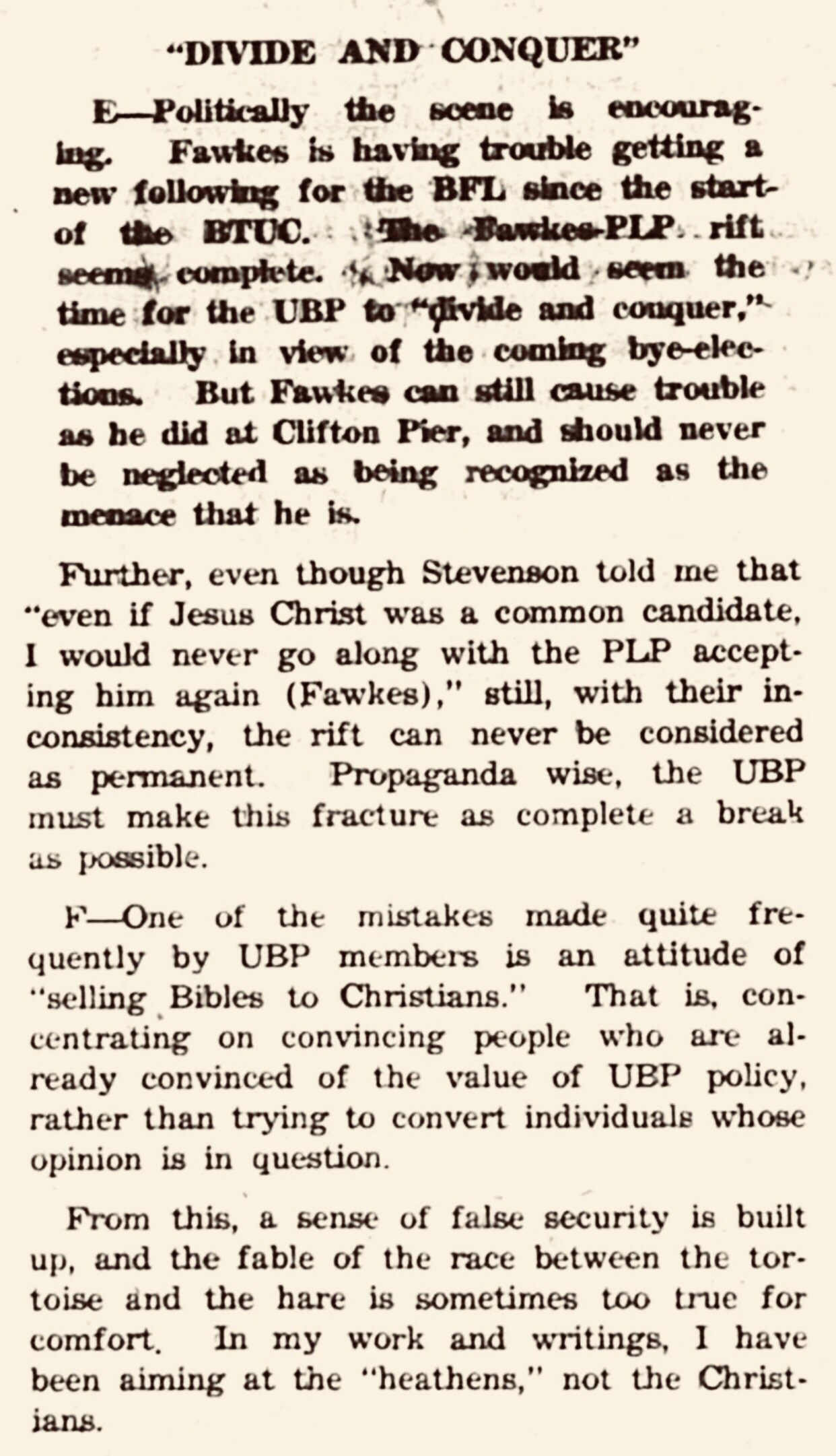 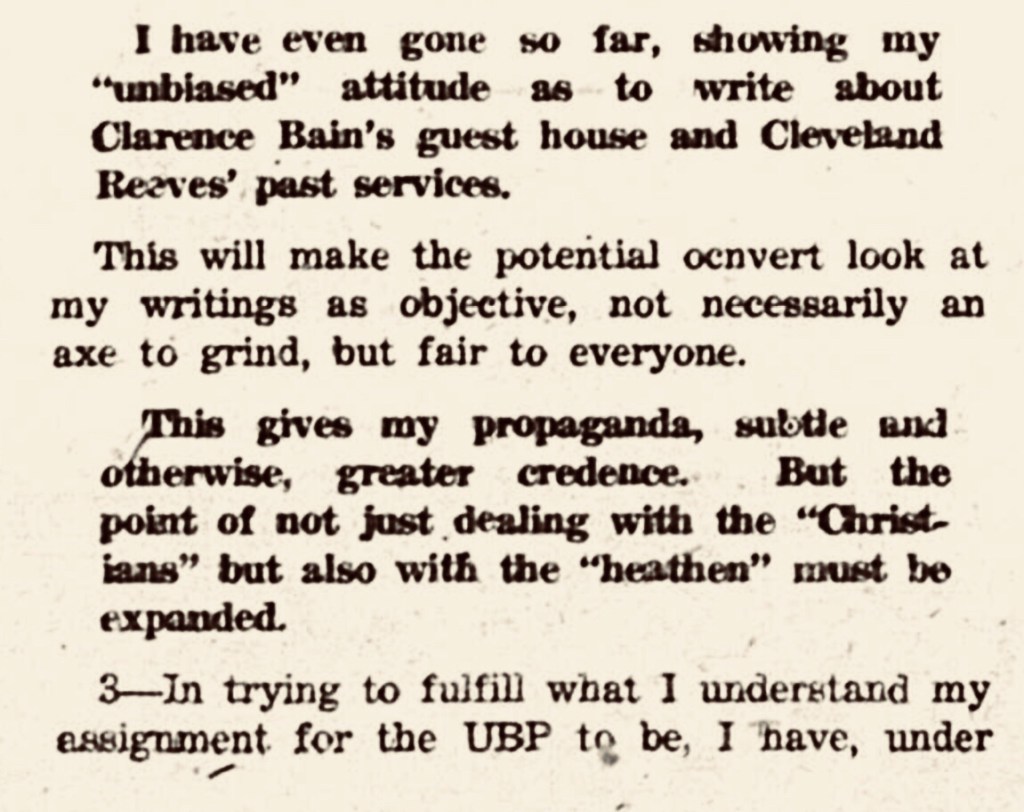 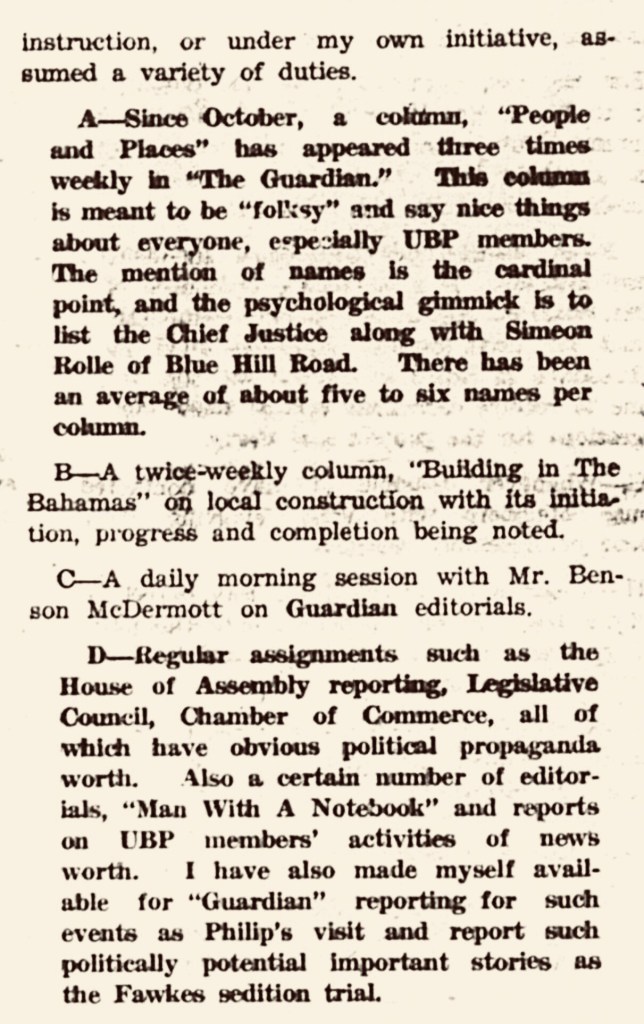 A weekly meeting, when members are available, of a committee composed of Mr. Stafford Sands, Mr. Robert Symonette and John Bethell, has been held on Tuesdays at lunch to discuss the job, for me to receive directions and to make suggestions for the project and the Party. 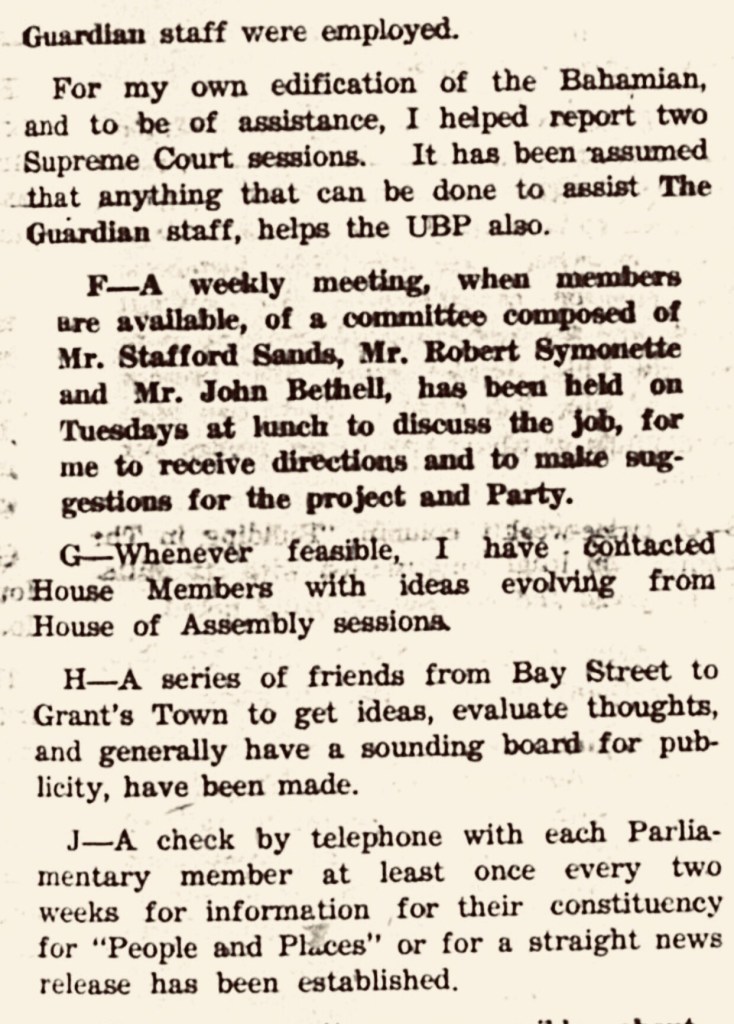 The creation of the character “Mr. Pete” became the pseudonym which Peter Knaur wrote various stories under the “People and Places” section in the Nassau Guardian. At first the articles were innocuous in order to attract a broad negro readership. After the “Mr. Pete” character gained a following, he started using it to publish UBP political propaganda. 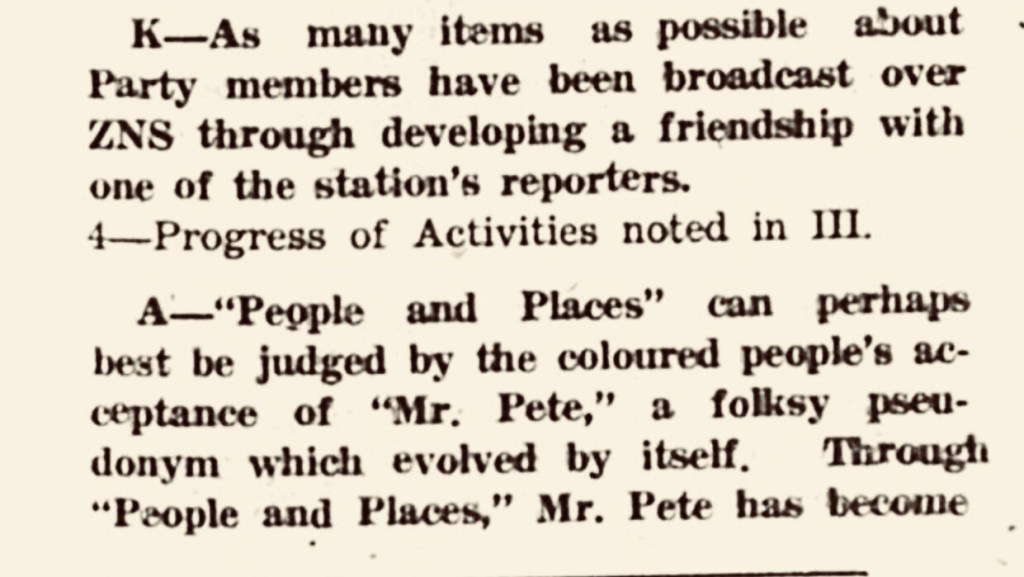 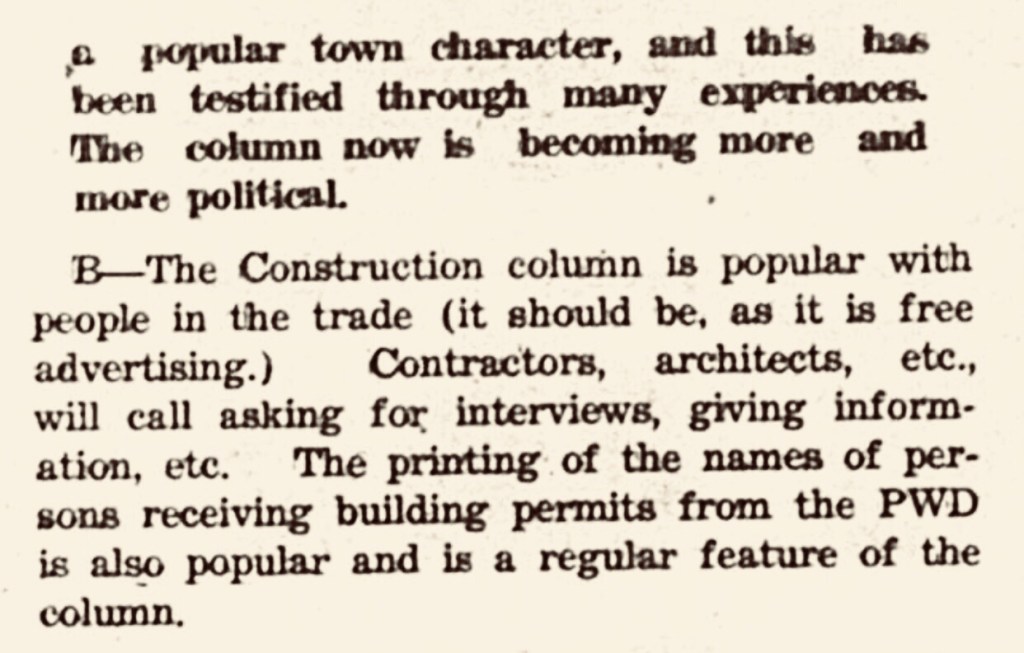 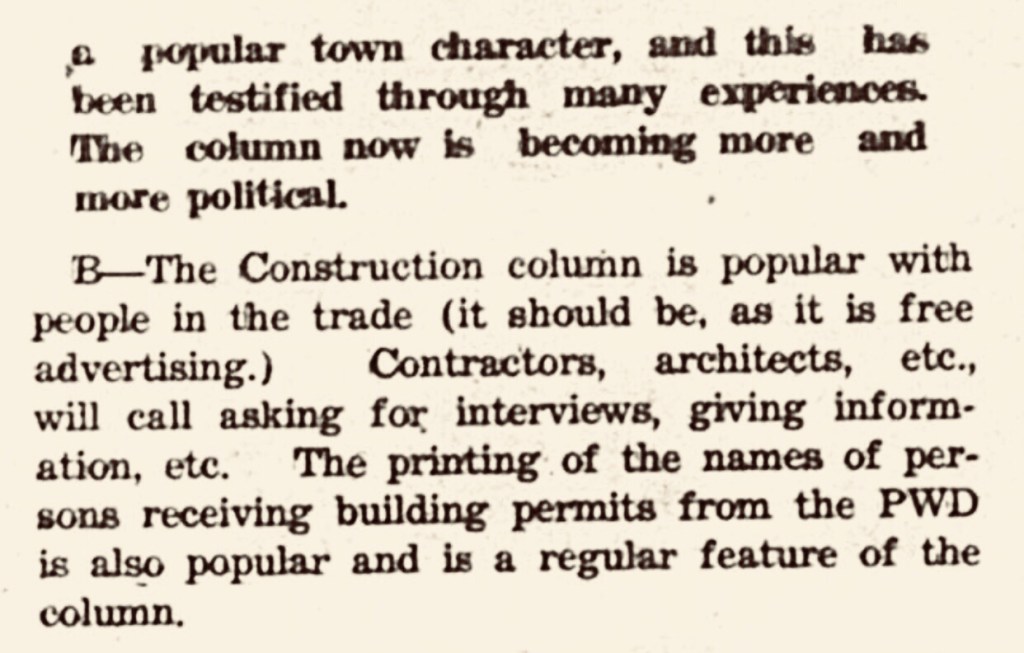 HOW TO MAKE “FRIENDS”

With the prosper assistance, if desired, I could supply each House Member with a rough copy of my House notes for their records of debates. Also with the proper planning, I could supply each Member, on request, with a list of legislation which conveys a certain settlement in his district in preparation for a trip to his constituency. 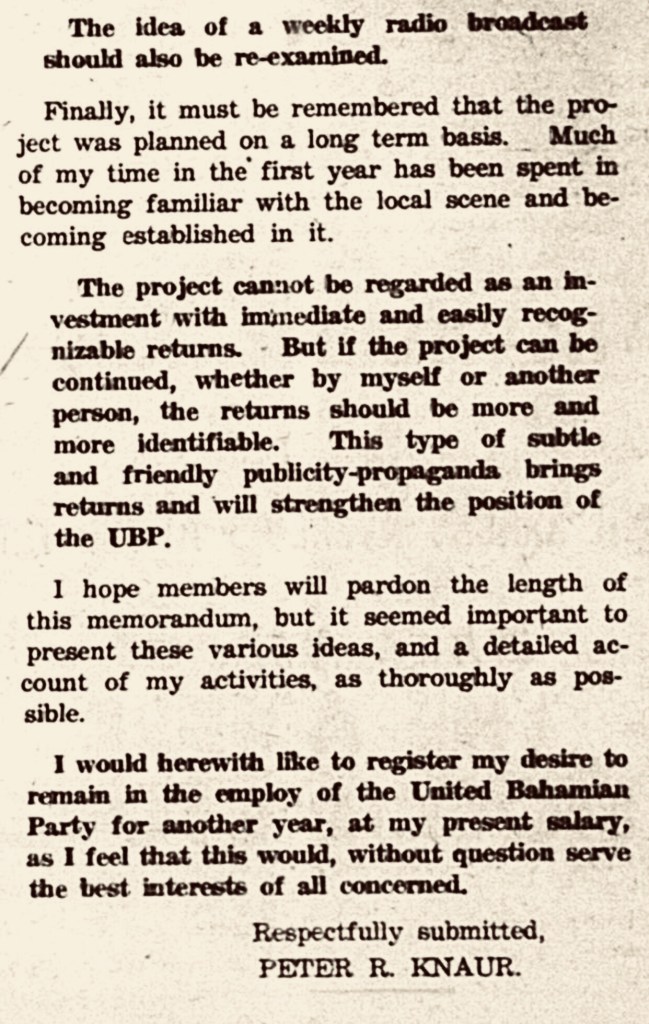 When discovery of the UBP MASTER PLAN, the brain child of hired propaganda expert Peter Knaur came to light, no one in the ruling UBP Party’s leadership was happy.

Knaur was seen as an idiot who let Party secrets fall into enemy hands.

Cyril Stevenson in the Nassau Herald couldn’t stop himself from making fun of one of the suggestions in the UBP Master Plan. Peter Knaur has suggested that UBP Members drive through Grant’s Town to keep their faces seen among the coloureds. Stevenson wrote, “not a single UBP politician dared visit Grant’s Town “to see an old friend.” 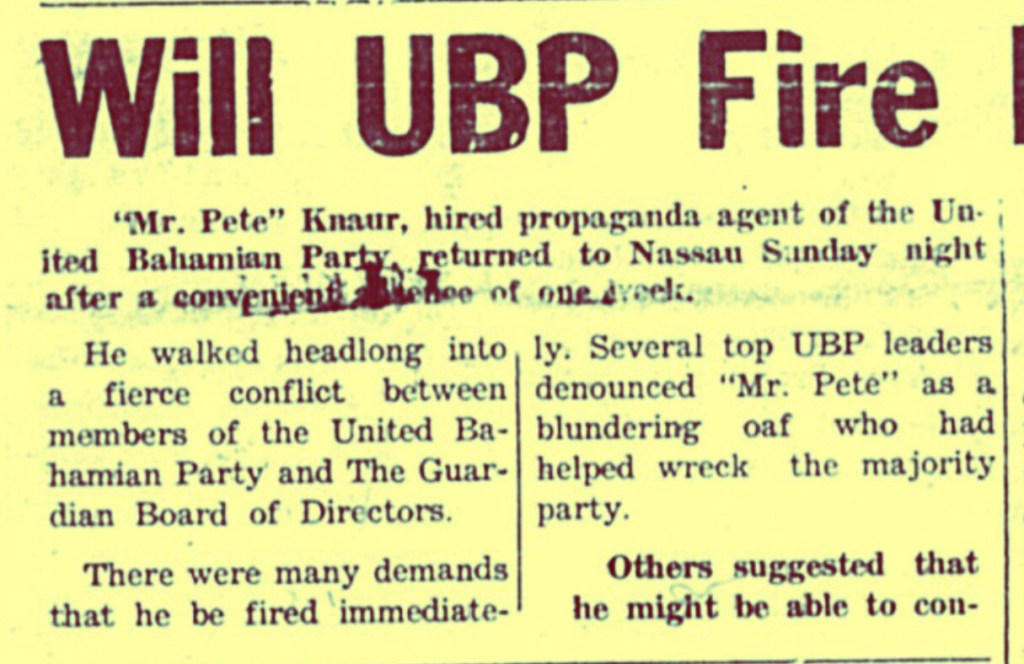 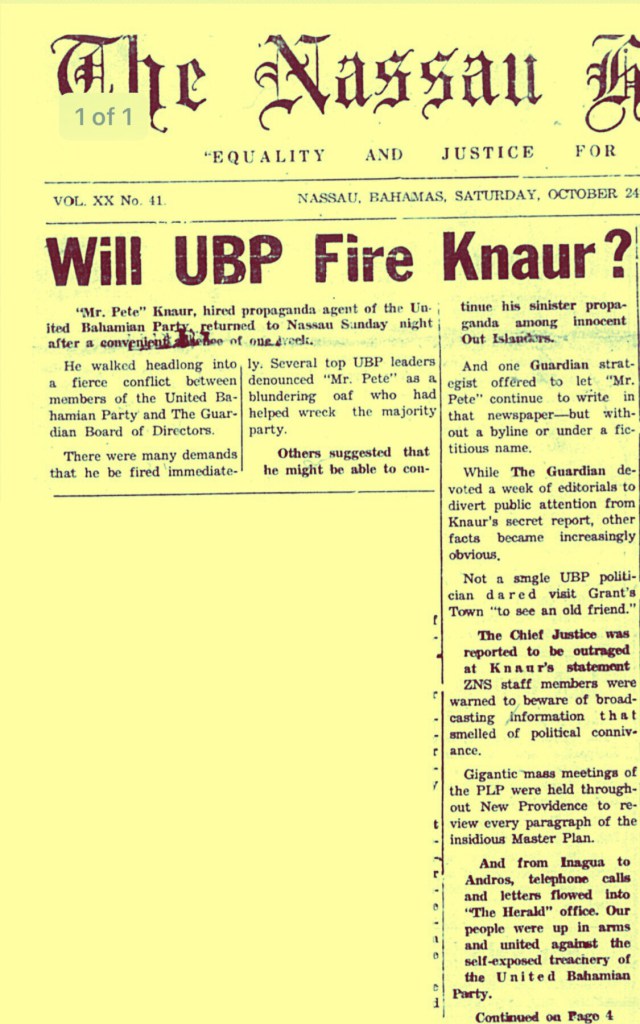 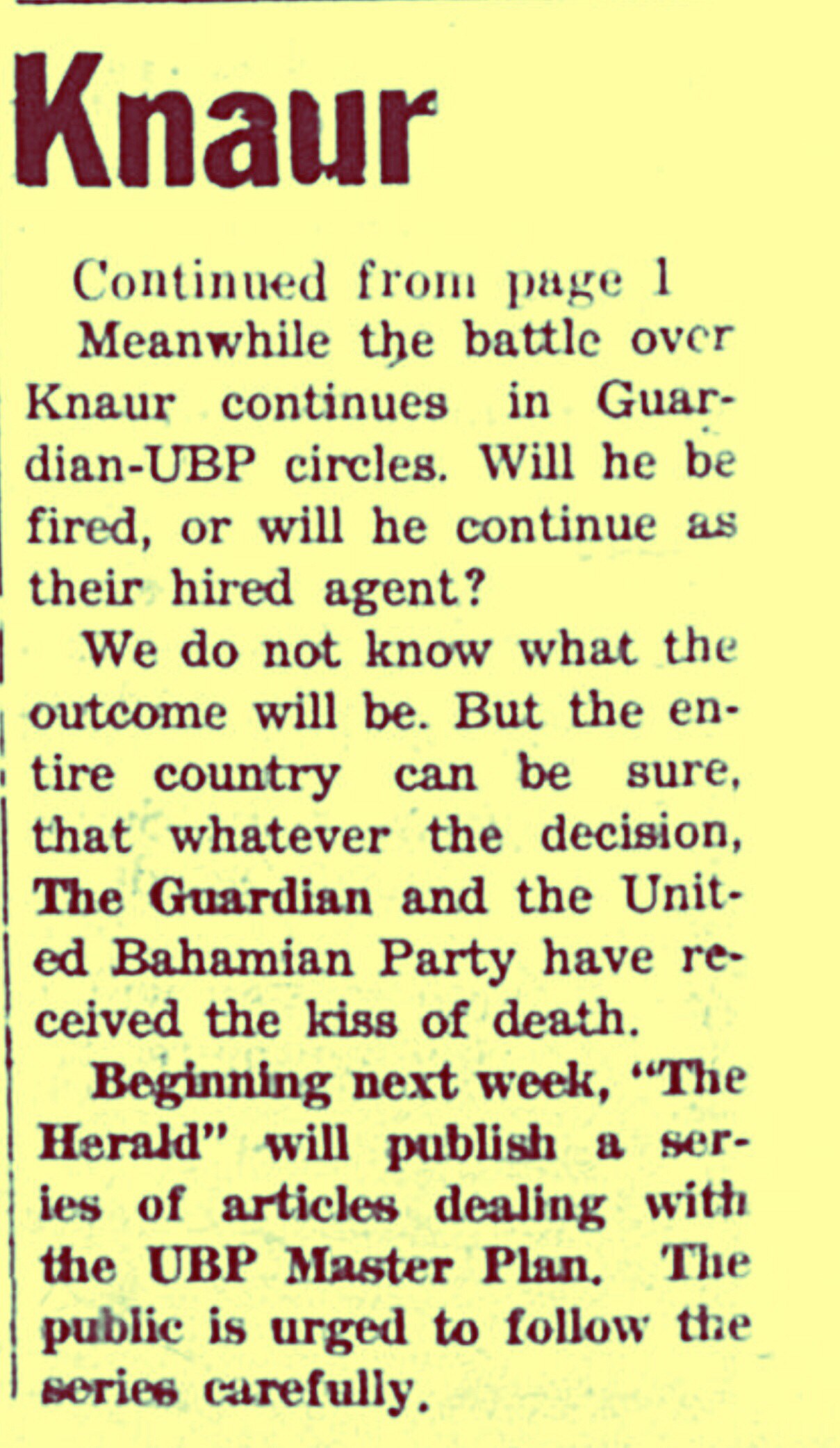