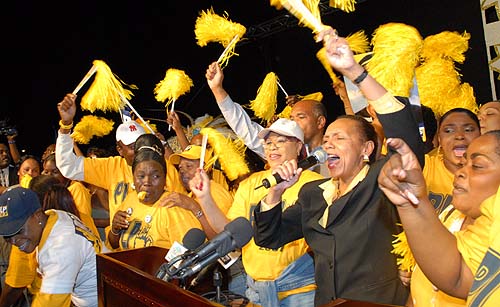 Nassau, The Bahamas – Members of the Progressive Liberal Party made claim yesterday that the Free National Movement government is once again misleading the public as reported in the local dailies that the PLP “overspent by 170 million”. Below is the full text issued by the PLP.

Recent statements made by the Rt. Honourable Hubert Ingraham and the FNM in the House of Assembly and reported in the local dailies that the PLP “ overspent by 170 million” can only be described as a disgraceful attempt by this inept FNM government to mislead the Bahamian people and shift the focus away from its ruinous policy of stop, review and cancel which has brought an abrupt halt to the projected growth of the Bahamian economy and thereby taking $100 million out of the Bahamian economy.

In short the PLP spent less than projected and collected more than was forecasted, therefore supporting the view that based on the facts the PLP were excellent steward’s of the Bahamian economy and now that the FNM government realizes that it is unable to match up to the performance of the Christie administration it has embarked on an evil and sinister plan to discredit the stellar management of the Bahamian economy by the PLP and in doing so are attempting to mislead the Bahamian people.

Mr. James Smith, the former Minister of Finance, one time Governor of the central bank and respected civil servant for more than 4 decades addressed these claims by the FNM months ago as was reported in the press that these misleading claims of the FNM were in effect nothing more than political optics. Yet the FNM in its desperation to mislead the Bahamian people continue to rehash half the truth.

The PLP understands that the FNM is jealous and envious of our record but the truth is the truth and the past the past so we advise them to marshal all of their energy and resources to restoring confidence in the Bahamian economy, addressing the pressing issues which affect our social well being such as crime, education and a multitude of social ills facing the country. Their actions over the past 7 months have clearly demonstrated that they have no meaningful agenda and no vision for a Bahamas in the 21st century.