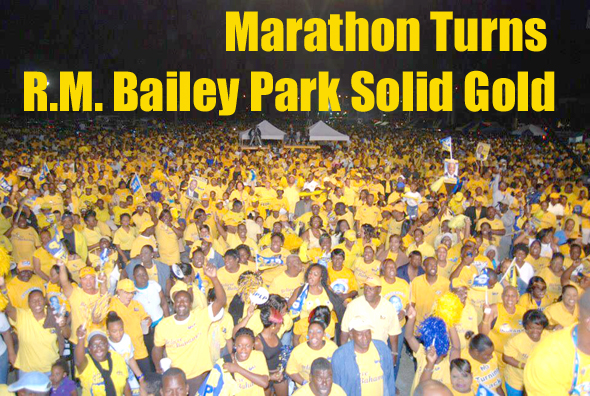 Nassau, Bahamas — PLPs in mass numbers last night proved to Hubert Ingraham and the FNM that nothing said about the PLP will break the momentum building against them.

By the time Perry Christie ascended the stage at R. M. Bailey Park, there were no parking spaces available in the entire Mall at Marathon Parking lot. Rallygoers filled Solomon Food store parking and some camped out in Cable Bahamas to watch the big screens.

PLPs claimed Marathon is SOLID GOLD as they lift the hand of its incoming MP Jerome Fitzgerald.

Friday night, the grass on the RM Bailey Park sparkled and gleamed as thousands of golden clad PLP supporters gathered to hear from the leadership of the PLP.

Hon. Cynthia Mother Pratt, who took the stage to express her gratitude for the support given her and the special opportunity she had to represent and serve the good people of St.Cecilia and the wider Bahamas, moved some to tears.

Tonight, the GOLD RUSH moves to PLP COUNTRY Grand Bahama, which, by all accounts, was badly neglected by the FNM.
.
Many would remember how BP’s MAN OF THE YEAR, Kenneth Russell, was fired from the Cabinet for asking a question. IT IS UNBELIEVABLE and politically distasteful.

The GOLDEN ROAD will lead to victory following the next general elections.