ALL WE COULD SEE IS PLP!!!! THE GOLD RUSH HAS LANDED IN NORTH ELEUTHERA…

Lower Bogue, Eleuthera – Encouraging the people of North Eleuthera to believe in themselves, their abilities and in The Bahamas once again, Leader of the Progressive Liberal Party, the Rt. Hon. Perry Christie told hundreds of Eleutherans, all dressed in gold, at the opening of PLP Candidate, Clay Sweeting’s headquarters in Lower Bogue on Saturday night, that now is the time for the PLP, a government that will put Bahamians first.

“More so than in anytime in our country, the government of The Bahamas must work everyday, everynight, all week, all month, all the year to ensure that Bahamians are given maximum opportunity in their country to be the best they can. That’s what we’re going for,” he said.

Mr. Christie slammed the Free National Movement government for its dismal performance on addressing crime and on job creation. 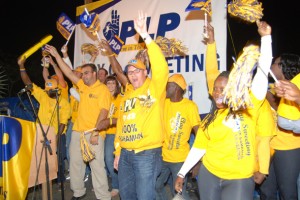 YOUNG Eleutherans have collected to the PLP in the hundreds.

PLP, deputy leader, Philip “Brave” Davis said that what the FNM government has delivered to the people throughout The Bahamas and without question in North Eleuthera is nearly five years of neglect and abandonment.

“After all the complaints about your ongoing electricity problems, lack of investment opportunities and job woes, they’ve got the nerve to come and beg for votes?” he asked. “They should be begging you for forgiveness”.

Mr. Davis explained how the FNM government’s mismanagement of the economy made the recession worse and increased the hardship on Bahamians.

“They raised taxes across the board when other governments were reducing tax burdens to help people through tough times.” He said that so little was done to stimulate our economy that we have a record high unemployment rate!”

During 2002-2007, the PLP Government created 22,000 new jobs. The Christie-led PLP caused the Bahamian economy to outpace US economic growth. And unemployment was at an irreducible minimum.

Clay Sweeting detailed the PLP’s plans for North Eleuthera which include doubling the investment in education and training and discussed initiatives like Career Path Academies and the Worker Retraining Programme.

He also highlighted the PLP’s pledge to ensure that Bahamians benefit from hotels receiving concessions under the Hotel Encouragement Act, the Home Sweet Home programme that allows Bahamians to access crown land in the family islands to build second homes and the provision of micro loans for small business ventures and the Bahamian Venture Capital Fund.

Mr. Sweeting, indicating the PLP’s commitment to preventing illegal poaching also told Eleutherans, “we will ensure that all the necessary steps are taken with the expanded deployment of the Royal Bahamas Defence Force to prevent those who do not have the legal right to fish our waters, from doing so,” he said. “This is my commitment to you the fishermen.”

The PLP leadership encouraged Bahamians to register and to vote. Mr. Sweeting’s colleague running on the PLP ticket for Central and South Eleuthera, Damien Gomez pointed out that several people in his constituency who have voted in past elections were experiencing difficulties in registering for the upcoming general election.

He said he would give authorities until Tuesday to sort it out or he will issue writs against the government.

Believe in The Bahamas
Learn more at MyPLP.org