The PLP is absolutely amazed that the Minister of The Environment’s response to the serious allegation of corruption and improprieties surrounding the award of a $240 million (approx.) contract by the Water and Sewerage Corporation came in the form of his tabling a statement in Parliament that was issued by the Chairman of the Water and Sewerage Corporation (WSC). (Click here to View the attachment of the Opening of Bid Winton RO Records Apr-27-07)

The government’s response has opened a ‘can of worms’ that definitely shows that under the FNM’s watch, insiders at WSC have been giving and continue to give away the Corporation’s assets and profits, with the implicit agreement of the two responsible Ministers.

The PLP notes with interest the FNM Government’s attempt to hide behind the gown-tails of the Corporation’s Board and Executives.  It is inexplicable and unacceptable that WSC answers to the questions regarding their own inaction and lack of propriety were presented as an acceptable response.

The self-serving statement asserted that:

“The corporation’s executive management and the board of directors “are satisfied that there was no impropriety in the bidding process, and the decisions taken were transparent and in the best interest of the Bahamian People””.

The PLP is in absolute disbelief of the FNM’s wicked attempt to convince the Bahamian Public that there was actually a bid process and are insulted by the insinuation that the Corporation’s Executives and Board arbitrarily awarded $332 million dollars of contracts, without Cabinet approval.

The Financial Regulations Act requires all awards of contracts for amounts in excess of Two Hundred and Fifty Thousand to be made by Cabinet.
Under local and international procurement guidelines, the government was obliged to go out to public tender for these contracts, or utilize a shortlist of internationally recognized desalination experts.

The response further revealed that bids were solicited from three firms, Consolidated Water, NPDC and Reiss Engineering, in an attempt to ‘stage’ a process.  It is most interesting, however, that two of the firms are not even in the water production business.

The PLP has been advised that none of the firms, including Consolidated Water, have recently won any internationally-bid contracts in the Caribbean; and that Consolidated Water, who has actually competed in recent legitimate bid processes, lost out every time – on price.  So the question has to be asked, what was the real reason for avoiding a proper bid process?

The government is rationalizing the improprieties, by stating that “competitive bidding normally takes 18 to 24 months, “but this time frame would have increased the risk to the Bahamian public of sustained water shortages during the transition period””.

Even more ridiculous than this rationale that a proper bid process takes too long, is the red-herring statement “that despite its efficiency, the original water supply strategy for New Providence called for the eventual replacement of barging as it is more costly.”

The PLP wishes to remind the FNM of the plans left in place to discontinue water barging by 2007 and proactively address the water demands of residents of New Providence, Baha Mar and other pending projects.  The FNM’s stop review and cancel treatment of the Eastern RO Plant bid process (see attached) and most recent cancellation of its own Arawak Cay/ Perpall’s Tract bid process, ranks of duplicity and hypocrisy and speaks to the real reason for their ‘self-created’ dilemma.

The PLP also wishes to remind Minister Deveaux that the FNM Government actually set the agenda and timetable for the relocation of the port.  Given the importance of potable water, if Minister Deveaux and his Jr. Minister Neymour were competent and diligent leaders, the bidding and production schedules would have been synchronized.

The Progressive Liberal Party also wishes to draw the public’s attention to what is clearly an equally subtle attempt to give New Providence Development Company its own monopoly over water and wastewater services in the western part of New Providence.  However, it is most interesting that they only choose to mention their ongoing discussions regarding water and not wastewater. NPDC’s performance in this area has been abysmal – as the residents of Charlotteville and neighbouring areas can attest.

The release also stated that:
“NPDC was chosen because the corporation has been in discussions over the years regarding the corporation supplying NPDC and formalizing its present operations in the west”

This particularly revelation is cause for even greater concern because it is incomprehensible that the government would allow WSC to make an about-face and buy 2 million imperial gallons of water per day (migd) from New Providence Development Company, an entity that is not even in the business of building and operating reverse osmosis plants!

Furthermore, as Water and Sewerage Corporation records attest, NPDC was willing to ‘purchase’ water at a price of $7.75 to $10 per thousand gallons from the corporation.

The fact that the NPDC giveaway coincides with the equally subtle and blatant giveaway to Consolidated Water confirms the PLP’s contention that something is seriously wrong at WSC.  Clearly these actions reek of corruption and incompetence, and if measured against the FNM’s own ‘Seven Principles of Public Life”, would fail miserably on all accounts.

The PLP demands that in the Public’s interest both award giveaways are rescinded.  Failing this the PLP is prepared to seek a judicial review of the same.
The stench of corruption gets progressively worse when we compare the NPDC water purchase cost of $92 million over 20 years (“$6.30 per thousand imperial gallons”) to the profits that WSC would make if it sells water to NPDC, at prices they discussed “over the years”.   The profits from such a deal would equate to $1,055,600 – $2,693,600 annually or $21,112,000 – $53,872.000 over twenty years.

This deal with NPDC will result in a heavily subsidized corporation losing $145 million in cash flow over 20 years and confirms our worst fears that something is horribly amiss at WSC.

Finally, the PLP also registers its contempt for the stated rationale of paying to construct a new five-million gallon storage tank at Consolidated’s Blue Hills compound and now alerts the public to yet another attempt to fast track or approve a ‘smudgy’ questionable deal.

The PLP wishes to remind the government that the current cost of RO water from Consolidated Water’s Blue Hill operations includes the cost of water production and storage. The cost of a smaller (4 migd) without water storage should be significantly less than the stated $6.20.

The PLP views water as a national security issue and calls on the Government to invoke its now infamous ‘stop, review and cancel’ process, to put an immediate halt to the proceedings relating to the questionable contract awards to Consolidated Water and NPDC.  Such a review will force the

Government to address the serious personnel and credibility issues at this corporation.

In the interim the Government is once again reminded to investigate the following:

1.    The connection between Jr. Minister Neymour and two of WSC senior personnel;

2.    Allegations that at least one major international player has cited WSC’s history of a lack of transparency in international tender processes as the reason for their refusal to engage in any procurement exercise in The Bahamas;

4.    The impact of Consolidated Water Company’s Non-Revenue Water (NRW) program, including an independent review of NRW losses in New Providence and why, after an alleged improvement of 1 million imperial gallons per day, losses have increased from 53% to 56% of daily production; 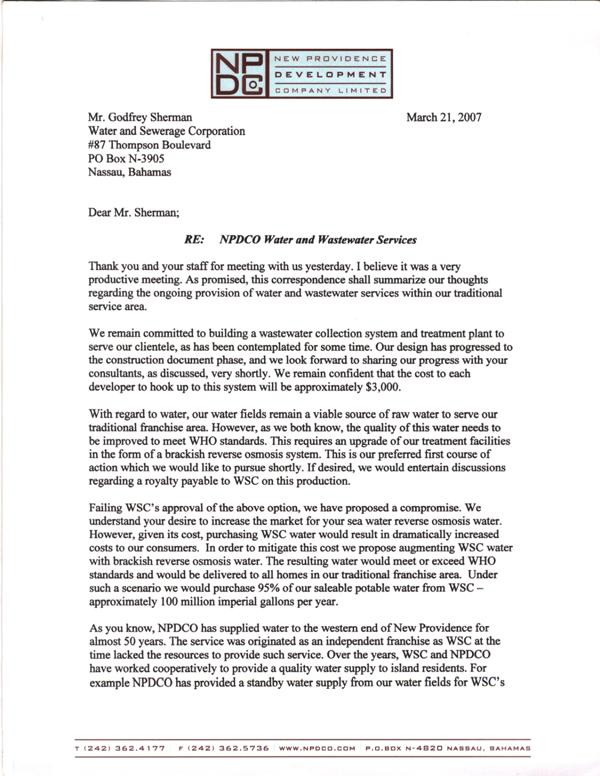