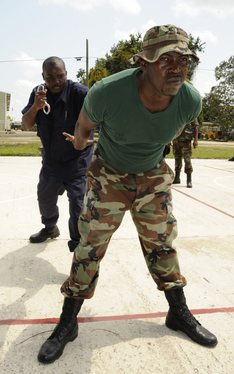 With an astounding 100 murders in the first 9 months of 2011, The Bahamas, particularly New Providence, has truly become a very dangerous place to live. I have heard politician after politician rant about their ideas on how to break the back of crime during the last political campaign season. But that was all talk. Besides, many of our politicians, who are attorneys, don’t have the will to execute convicted murderers; despite the fact that most Bahamians are calling for the death penalty to be carried out. But instead of listening to the cries of the Bahamian electorate,the Ingraham administration continues to pander to the Privy Council. This unreasonable position by the FNM government will come back to haunt them on election day. I understand that most Parliamentarians are against capital punishment.

With all due respect to Prime Minister Ingraham and the Free National Movement, I don’t believe the government can effectively deal with this hideous monster that is presently destroying this nation. I have lost confidence in our government. This thing is way beyond the control of the state. They have allowed it to get this far. Neither am I confident that the Progressive Liberal Party can fix our crime problem, notwithstanding their successful Urban Renewal Programme. I don’t believe that Urban Renewal is enough.

I believe that the crime situation in this country is in some way connected to the drug trade. True, quite a few of the murders that were committed this year were domestic disputes. But many of the murders that were committed were drug related. Drug trafficking became a major issue in The Bahamas during the late 70s and well into the 80s.
Several of the Family Islands had many drug dealers in the 1980s. Many of these men and women were multimillionaires who were hell-bent on disobeying the laws of the land in order to further enrich themselves. It never dawned on me, though, that drug trafficking would play a major role in the crime dilemma in New Providence.

But, apparently this is what is happening today in Nassau. These miscreants aren’t willing to sit down and iron out their differences. They know absolutely nothing about conflict resolution. The powers-that-be closed a blind eye to what was happening in this country in the 1980s. Some Bahamians profited handsomely from the drug trade. We sacrificed our morality and dignity on the altar of greed. We never thought that we would reap the rotten fruit of the illicit drug trade.

Rival drug dealers and gangsters are killing each other in the inner city areas of New Providence. It has become so dangerous in places like Bain Town that government workers from the Department of Statistics are afraid to go into these areas to do their job. How did successive governments allowed Nassau to get this bad? I am afraid that very soon drug dealers and gangsters will control certain communities in Nassau. I am also afraid that these shady persons will start targeting Parliamentarians, government prosecutors, police officers and judges. This is already happening in Mexico.

Prime Minister Hubert Ingraham should declare martial law. Martial law is the imposition of military rule by military authorities over designated regions on an emergency basis. I believe that the country is in the midst of an emergency. We must stop fooling ourselves. There is widespread mayhem in New Providence. The government should allow the Royal Bahamas Defence Force to take full charge of the inner city of Nassau. The career criminals of Nassau have run amok. They don’t fear the law at all. I read in a prominent Nassau daily that 18 witnesses have been murdered so far for the year. These murderers are now bumping off eye-witnesses. Is it any wonder why law-abiding citizens are now afraid to testify in court? The state has proven time and again that it cannot protect its citizens.

The government should also seriously consider building a Defence Force station right in the heart of the crime infested areas. The officers should be allowed to conduct random searches in the homes of known criminals without search warrants. The state should also give the Defence Force authorization to detain these criminals. Let these accused murderers be tried before a military tribunal instead of a civilian court. If found guilty, let the Defence Force execute them immediately by a firing squad. I believe that law enforcement officers know who the criminals are. New Providence is a very small island.

If their attorneys protest these radical measures,then they should also be detained. Let us ignore the rhetoric of constitutional rights from these professionals. This is what martial law is all about; the suspension of the constitution. If an attorney is successful in winning his client’s case; and the client goes out and commit another murder; then that attorney should be charged as an accomplice to murder. The government needs to become radical.

A strict curfew should also be enforced in the inner city communities by the Defence Force. Too many unscrupulous persons are roaming the streets during the night. Only those who work during the night or those who have an emergency should be allowed to move about.

The government should hold accused murderers,their families and their attorneys accountable if a witness is murdered. The state should also hold judges and magistrates responsible if they give bail to repeat offenders who then go out and commit another murder. The government should give serious consideration to building a detention centre on one of the unpopulated cays. Career criminals should be banished there for life without the possibility of parole. Foreign prison officers should be brought in to run this penal colony. First century Rome also had a penal colony; the island of Patmos. Chronic offenders whose parents came here as illegal immigrants should be deported immediately.

Prime Minister Ingraham should fire the judges whose rulings are repeatedly quashed by the higher courts. There are too many inept judges in our judicial system. Prime Minister Ingraham also needs to remove the Hon. Tommy Turnquest from the Ministry of National Security. The PM should replace Mr Turnquest as the National Security Minister. The Minister has not done a good job. The PM has shown that he is a tough,no-nonsense leader. The FNM government should have amended the Bail Act by now. In fact, I think the PM should have called for a special session of the House of Assembly in order to deal with this vexing situation. Time is of the essence. Parliament should have reconvened by now. The nation is in the midst of a crisis.

I am not advocating for the removal of power from the executive government. I am calling for martial law to be declared in the inner city communities of New Providence. Let the Defence Force go into these communities and establish its presence. The one hundred murders committed in the first nine months of 2011 have proven that the present policies of the FNM government have failed miserably. The PM needs to declare martial law before the crime crisis gets any worse.